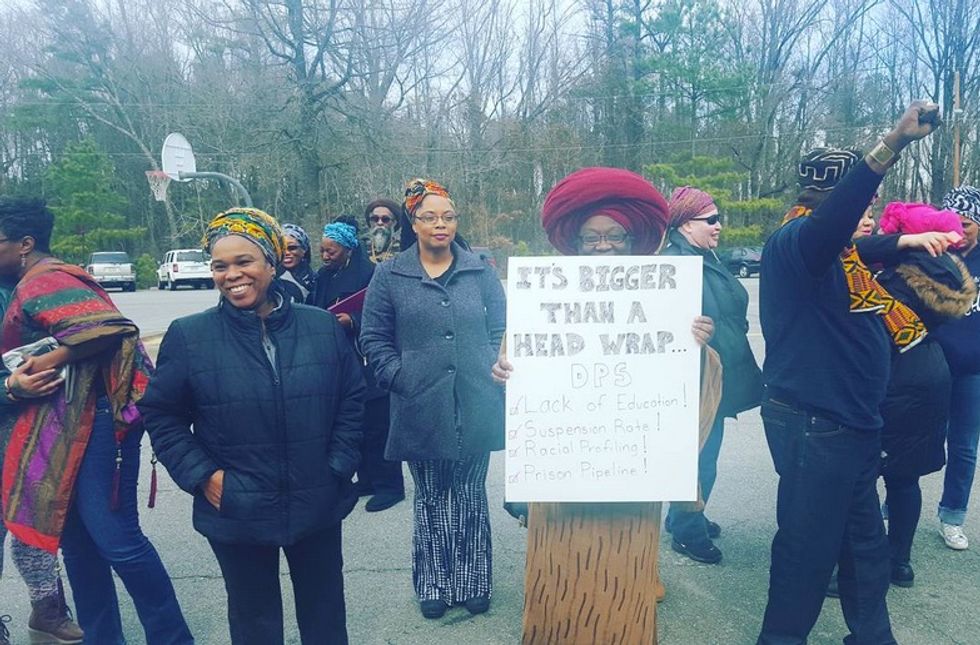 Students and parents in Durham, North Carolina are demonstrating for the right to wear head wraps in honor of Black History Month.

Durham County Public Schools’ dress code policy in North Carolina came into question this week after an incident at the School for Creative Studies, reports WTVD.

A group of students at the Durham magnet school decided to wear African head wraps to kick off celebrating Black History Month, but were instructed to remove them due to the ‘no hats or head coverings’ policy in the school district’s dress code. Parents said the students were threatened with punishment if they continued, however, the school denied the claim.

After meeting with the students, the principal gave permission for the them to wear the head wraps as part of a learning opportunity for the greater school community for their Black History Month programming.

This solution was not enough for the concerned parents. They then held a protest to stress that students should be allowed to wear head wraps beyond the day granted, so they can have the right to always express their culture, history and heritage.

"Our girls should be able to express themselves culturally, regardless of whether it's Black History Month or not," Dosali Reed-Bandele, a parent of a junior at the school, tells WTVD."They should be able to wear their head wraps... It happened to me in high school but I had to stand firm to my principal and say, this is a part of my culture."

Using the hashtag, #ItsBiggerThanAHeadWrap, supporters continued to show solidarity and document the demonstration.

According to a statement WTVD received from Durham County Public Schools Superintendent, Dr. Bert L’Homme, L'Homme planned on sharing the parents’ grievances with a committee that looked over revisions to the district’s student conduct code.

The meeting occurred Thursday evening, and according to the minutes of the meeting made available on the official website of the school district, the incident was not raised and the policy did not indicate much change.

Letters of support can be sent to the students here.

A parent of one of the girls in trouble for wearing a headwrap to school. #itsbiggerthanaheadwrap

Wrapped solidarity because #itsbiggerthanaheadwrap A photo posted by Journé (@journey_sofab) on Feb 8, 2016 at 11:44am PST

Alexis and Alexis both wrapped in love and standing in solidarity #itsbiggerthanaheadwrap A photo posted by Gemynii (@gemynii) on Feb 8, 2016 at 11:50am PST

Crown right for #formation #itsbiggerthanaheadwrap A photo posted by Gemynii (@gemynii) on Feb 8, 2016 at 11:54am PST

Who do you roll with when the school system attacks your daughters for wearing their crowns? #Solidarity #Tribe #Crownedup #Itsbiggerthanaheadwrap #Gele #BullCity Repost: much love to you @freedomclay A photo posted by Omisade B. (@oshunsweetnsour) on Feb 8, 2016 at 9:15pm PST

#ItsBiggerThanaHeadwrap #BlackGirlMagic #Love✊? A photo posted by Brittany R. ?? (@unapologetically_blaque) on Feb 9, 2016 at 9:11am PST

Ladies I ask that you all join me with the hashtag #itsbiggerthanaheadwrap in camaraderie with the young ladies of a Durham, N.C. High school. They were told that their geles (head wraps) had to be removed and violated dress code. I'm all for cultural expression especially in young black women looking to understand THEIR heritage. Black history month or not....this is apart of our identity. #itsbiggerthanaheadwrap ??✊? A photo posted by Eden (@edenofzamunda) on Feb 9, 2016 at 3:13pm PST

About two dozen parents organized at the School for Creative Studies in Durham, NC Monday dressed in geles to protest. Several teen girls at the school wore head wraps as a symbol of pride to represent their connection to Africa while celebrating Black History Month. An administrator told the group of girls they had to remove their geles or wear them so that their hair showed. Parents stood in solidarity with the girls, and so do I. #turbanista #africanpride #itsbiggerthanaheadwrap #blackhistorymonth A photo posted by D.L. Teamor (@dlteamor) on Feb 10, 2016 at 8:23am PST

I maintain that we should not have to notify anyone before expressing who we are. That is a conversation between oneself and spirit. #itsbiggerthanaheadwrap #istandwiththegirls #changethedresscodenotourclothes A photo posted by Afiya Carter (@afiyac_) on Feb 12, 2016 at 11:13pm PST

This is me, standing with the girls at the Durham School for Creative Studies who were denied their expression of Black History Month through headwraps. #itsbiggerthanaheadwrap #culturallyINclusivedresscodes A photo posted by Grace :) (@graceayorkor) on Feb 12, 2016 at 5:29pm PST

#CrownedUp in solidarity. Because it's more than fashion. Because a former boss told me I looked like "the help" and asked if I "needed a broom" when I wore my hair wrapped. Because I refuse to apologize for the things my heart wants to celebrate. #ItsBiggerThanAHeadwrap A photo posted by Monet Noelle (@madamemonarch) on Feb 8, 2016 at 8:42am PST