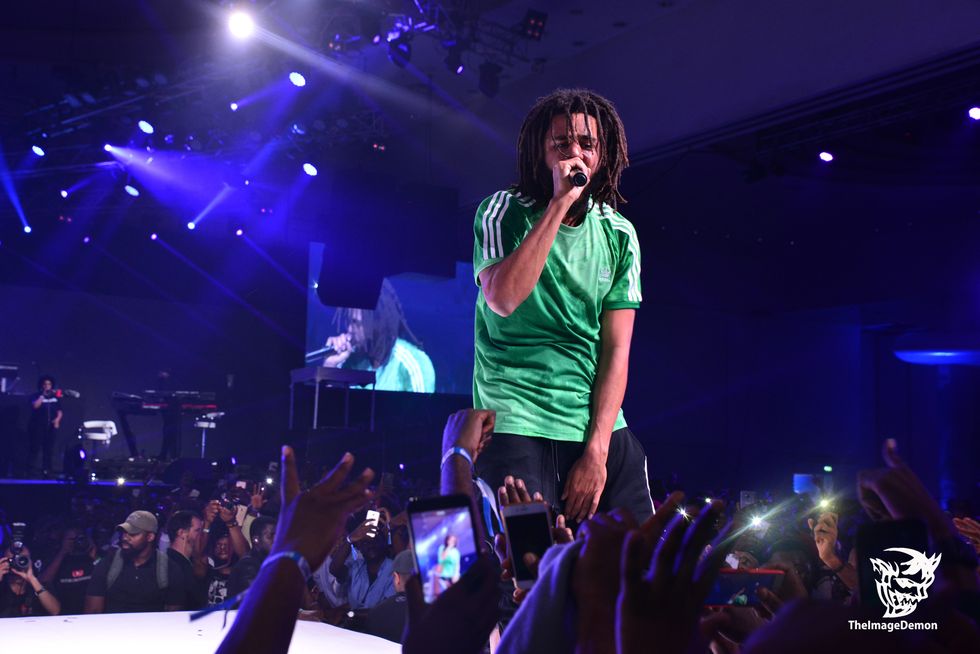 After a suicide attempt, J. Cole became more than an artist to me. He was my life coach. One year later, he came to Nigeria.

"Why are you trying to kill yourself? What is so hard in the world that you want to end your life?"

I heard my rescuer asking as I sat on the waterfront, hot tears streaming down my face, mixing with the drops of water and ultimately dribbling into on my soaked clothes. I had tried to drown myself in Lagos that night in April 2017, and by some stroke of fortune, someone had dived right in to save my life.

At that moment, I wasn't grateful for the chance to see another day and breath the air. A part of me resented him for being a saviour, and not minding his business. Another part was filled with shame that I had let depression bring me to the edge of my humanity, and the final part was just bitterness from the pain. And so I sat on the floor and wept, while people gathered and gave me lots of advice and encouragement.

"Brother, there is so much to live for. And look at you, you are not poor. You are a fine young man," the voice of a lady hit me.

I returned to my office that night, and told my bosses that the resignation email I sent to them earlier was an error, withdrew it, and deleted all my parting letters to my friends and family. Not accomplishing a suicide felt like failure. I learned that day that rearranging the pieces of my existence back to how it was, was the morbid equivalent of a walk of shame. I did that walk of shame. On the drive back home in an Uber, I took the aux cord and played the first album that hit my mind.

"Do you wanna, do you wanna be, happy?" The first words from the "Intro" cut felt personal. I had listened to the album a million times, but much of it was simply for sonic appreciation. Now it was speaking directly to me, bypassing my creative receptors, and going straight to my soul.

"Free from pain, free from scars, free to sing, free from bars..." J. Cole sang. It was a direct message to me, one that was telling me that the walls of depression that had kept me imprisoned in my unhappiness and held me in chains, had done enough damage. It was time to let go.

J. Cole wasn't an artist for me at that point. He was my needed life coach, and listening to that album was the reset I needed to seek help for my mental troubles, and push for help. When I got to the record, "Love yourz," I broke down crying. There's no such thing as a life that's better than mine, and I have to learn to love it.

That was the day I began the journey to purging my mind and replacing all the pieces of my mental fabric. I have suffered chronic depression for years, but had carried on, ignoring it and wishing it away. At my lowest point, I had tried to hurt myself, and by doing that, hurt the people I love.

J. Cole helped put that in perspective as an artist who could turn sorrow and pain to teaching tools. His 4th studio album, 4 Your Eyez Only, was told from the perspective of his late friend's daughter. KOD,his latest project, preached about the dangers of over-indulgence, and calls for conscious abstinence.

One year later, he was in Nigeria.

After consuming his music, and working through my issues, I had found multiple reasons to go on. I had finally quit my job, but this time, it was because of healthy career choices, and self-harm was not a motivating factor. J. Cole's music, in combination with therapy, and improved lifestyle choices had ridden me of my depression. I had come out of it completely.

When the announcement came through that J. Cole was going to be performing live in Nigeria a lot of people had their doubts. This is arguably one of the world's best rappers, who is having the run of his life. Coming to Africa in a year when he is working on a new project shouldn't be top of his priority list. But CastleLite, the beer company, had paid for his performance as part of their annual concert series, and Lagos was the destination.

When I told my elder brother who lives in Akwa Ibom State, in the south of Nigeria, that I would be at a J. Cole's concert his laugh was discouraging. "This is one of your wild imaginations again. Go and watch Wizkid perform and complain about a bad performance."

But J. Cole came through. He arrived in Lagos via Murtala Muhammed International Airport on Wednesday, April 25. And lodged at the Eko Hotel & Suites, in Victoria Island. For one who was preaching about the dangers of over-consumption, he looked and played the part. First, he didn't announce his presence in Nigeria. Not one tweet, Instagram post or anything told the world that he was performing in Africa, the Motherland. He was minimalist, refusing to wear any jewelry. There were no chains, no rings, no earrings, nothing. All he had on were the necessary things. Shirt, pants, and iPhone. Don't forget the iPhone.

When he wanted alcohol, he only drank Hennessy Black, and didn't care about his security. He walked casually around his hotel grounds, to the amazement of people who bumped into him. It's not every day you see a global hip-hop star simply strolling around your neighbourhood, talking on the phone, while security struggled to catch-up.

Prior to his Lagos trip, the rapper had not performed in over four months. His new album KOD had come out a week earlier and shot straight to the top of the Billboard chart. To get back in tune, he went extra hard for the rehearsal. Cole was booked to perform a 1-hour set. But guess what? He rehearsed for 17-hours straight. Every detail had to be right, every sonic arrangement was placed perfectly. Live performances for him are a chance to see first-hand the beauty of his art on people, in an enclosed space. And he made it happen.

On the night, Lagos stood still. People flew in from all over the country, making the journey to be a part of history. The tickets were sold out for the 6,000-capacity Eko Convention Center venue. Cars lined the streets from end to end, while the entrance gates looked like a scene from a post-apocalyptic rush. In every car you walked past, a J. Cole song played. Personally, I heard tracks from all five of his albums. You could tell who had a ticket and who didn't. Everyone with a ticket had a smile decorating their face. Those without were spotting furrows in their brows. Nigeria had caught the bug, and for those without a ticket, they had gotten desperate.

"Bro, anything you want, I can pay you to buy your ticket right now," a man stopped me to offer cash, his watch, and perhaps his soul. I was waving a VVIP ticket, and it felt like it was the key to his salvation. Our salvation.

"No Sir, nothing you can offer me right now, will make me let go of this beauty," I said, while kissing my ticket. I wasn't here to watch a concert. For me it was deeper. I made the trip to this venue to get a live dose of the energy and wisdom that had saved my life. Money or watches can't buy that. Well they can, but not at the 11th hour of Cole.

There were also performances from Wizkid, Davido, Tiwa Savage, Falz, M.I Abaga and Ycee. And while the reaction to them was great, there was always a sense of anticipation, a feeling of rush towards the main event. After Davido left the stage, and the hosts counted down for the singer to show up, it took an extra hour for him to finally make the entrance. Conversations with some of the organisers reveal that Cole had doubts about Lagos knowing his records. While his engineers set up the sound, and counted down, he was apprehensive about the reaction he would get. Add that to his long spell away from the stage, and you will understand his concerns.

Cole, sporting a T-Shirt with the symbolic Nigerian nation colours of green and white, stood in mild surprise at his reception. He didn't see this coming. After what seemed like enough time to soak it in, he launched in with "A Tale Of 2 Citiez," and the crowd gave him the shocker of his life. Every word on his set was screamed back at him. We knew his albums, line by line.

"''I guess I was f***ing up by not coming to Nigeria earlier'', he said. Clearly, the love had gotten to him and inspired more.

We raised a finger in the air, as King Cole instructed, while he signalled his band to launch into "Déjà vu." ("Aye, put a finger in the sky if you want it n**a, Aye, put two fingers in the sky if you want it..."). From there it was a madness. We went in circles, touching each album as we go. The crowd's energy fed Cole, and his art fed the crowd. He apologized that he might not have all the words from the new album, but that didn't stop him from offering "Photograph," "KOD" and "Motiv8" as part of his set. On "Photograph," he appeared to miss a line during his performance, and flashed a knowing smile which seemed to say "I warned you, didn't I?"

J. Cole would later share his stage with his Dreamville signee, Bas, who performed two records titled 'Housewives' and 'Lit'.

The final stretch of his 1-hour performance contained "Neighbours," the witty "Wet Dreamz," "GOMD," and finally "No Role Modelz."

There was sincerity in his voice, his breath was heavy, and his face lit up with sweat, as he gave his vote of thanks. "Thank you Lagos for the love. I appreciate you all, and it won't be long before you see me again. Before I leave, please do me one favor, MAKE SOME Mother****ing NOISE"!!!!

On the way out of the hall, the conversations from the exiting crowd were still buzzing. I was stuck in my head, feeling blessed by the experience, and reinforcing all the images in my mind. J. Cole delivered a spectacular performance, washing us all in the power of his creativity. On a personal level, this brought back many memories, reminding me of how I would never have witnessed this, had I succeeded in ending my life. Cole's work is revered not only for the genius of his wordplay, or the vigour of his beats. He is placed on a pedestal because, through his music, he speaks to your soul, as a friend, as a brother, and teacher who wants the best for you.

But one particular fan didn't share this view. He was yelling while being consoled by three of his friends.

I stepped in to offer some wise words, explain the situation, and sooth his pain. Fan love can be such a powerful emotion, especially when mixed with a sense of loss.

"J. Cole was booked for an hour," I said. "He couldn't possibly fit in all his discography into this short performance."

"Why didn't they book him for longer? Don't they have the money? I wanted that song!" He yelled at me.

I retreated and left him to his sorrow. Ingrate.