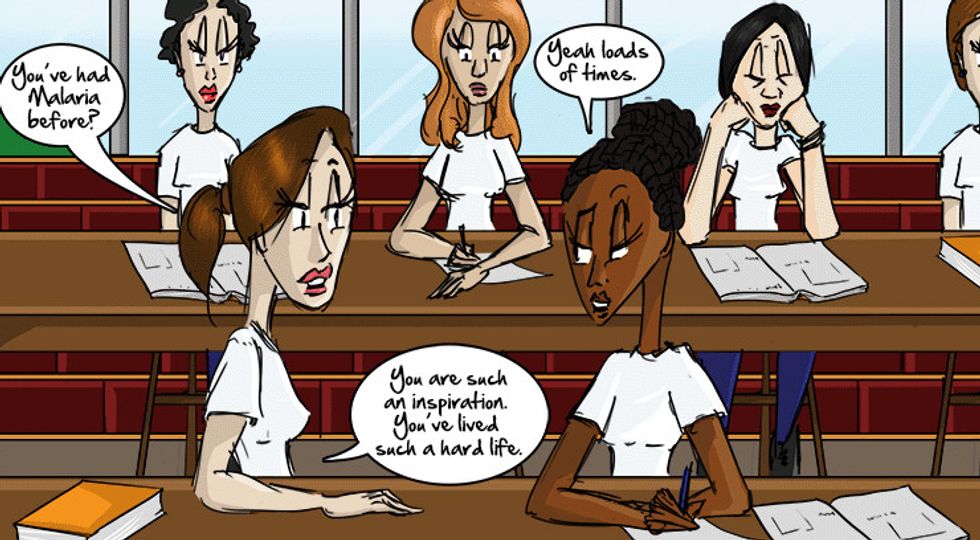 For the creator of JAND, or Just Another Nigerian Drama, comics are about capturing a slice of Nigerian bourgeois life not usually explored.

In search of other forms of content, Aderinokun turned to webcomics, a hybrid of a childhood pastime and the increasing presence of mediums that promoted online reading.

“I was trying to find an alternative, which is how I discovered webcomics. I used to read Archie a lot as a kid, but I thought this is the internet age, what’s out there?” Aderinokun tells OkayAfrica.

In 2014, the artist created JAND, a webcomic of her own. The comic, which explores the lives of 8 university aged students living and studying in London, is inspired by a demographic Aderinokun knows too well. The circle of young, Nigerians from upper to middle class backgrounds is a storyline that Aderinokun feels is never really explored in films, books, or television shows about the country and JAND is her to attempt to rectify the oversight.

“People don't realize that there is an upper class in Nigeria, because the media doesn’t show it,” says Aderinokun.

Although the Nigerian comic book industry is experiencing modest growth, it remains fertile ground for the introduction of characters and stories that are modeled after everyday Nigerian experiences and encounters. Other than the cult classic Supa Strikas, most comics in wide circulation are science fiction or fantasy oriented and are replete with superhero characters or mythological reinventions of classic stories.

After a chance encounter with the slice of life webcomic Questionable Content, Aderinokun, who studied animation at the Academy of Art University in San Francisco, eschewed the superhero antics and created a comic grounded in an experience that she was very familiar with—being a Nigerian student living and studying in London.

The title of the comic, JAND serves a double purpose. As the title, it is an acronym that encapsulates the comic’s long-running theme—Just Another Nigerian Drama. In a larger Nigerian context, London and often the United Kingdom as a whole is colloquially referred to as Jand, especially by Nigerian students who migrate there to continue their education.

Aderinokun, who has studied in Nigeria, Togo, London and San Francisco, returned to London, creatively, for the storyline of her comic because of the nature of the city and its reputation as a preferred location for Nigerian students looking to further their education abroad.

“I believe the most diverse Nigerian people are in London, and I really wanted to create a bunch of different characters that reflected that,” Aderinokun tells OkayAfrica.

According to the report, Migration in Nigeria: A Country Profile 2009, the number of Nigerian students in educational institutions in the United Kingdom was projected to rise from 2,800 in 2007 to 30,000 in 2015, making it the number one academic destination for young Nigerians.

Many factors have contributed to a proclivity for sending students to the United Kingdom to continue their education. The geographic proximity and the comparatively easy process of acquiring a visa are at the top of the list, but the students, who are usually from upper to middle-class families are no strangers to the National Curriculum employed in schools in England. According to Cambridge International Examinations, there are over 100 schools in the city of Lagos alone that offer the IGCSE exams to students interested in continuing their education in the UK.

Although JAND’s glimpse at Nigeria’s bourgeois is seen through the experiences of young adults studying abroad and is relegated to lighthearted accounts of one-night stands, secret relationships, and warring couples, there is the occasional strip, which delves slightly deeper, but not without the pretext of comedic relief. One particular strip aptly titled Malaria, features a character named Temi fielding questions from curious classmates about her numerous bouts with the disease. In the comic, Aderinokun notes that a personal encounter inspired the scene.

“All the characters embody something from me, some of them were loosely based on people and situations, but the characters tend to take a life of their own the more I write.”

Artists might employ this trope often, but while watching the characters contemplate everything from relationships to religion in each comic strip, Aderinokun’s puppet strings become less visible, making each encounter more realistic than the last.

“It was incredibly important for the characters to feel relatable,” says Aderinokun.

The familiar nature of JAND is what makes the comic an interesting read. For those who are or have been students in U.K, the melodramatic tendencies of the characters and the storylines feel as if they have been culled from real-life experiences.

If the comments from Aderinokun’s 100,000+ unique visitors are any indication, Aderinokun has succeeded in connecting with her audience. Readers often respond to strips with a sigh of recognition, approval or annoyance at storylines. In many ways, readers have claimed ownership over the characters and the story itself.

"Readers always have an opinion about what should happen to a character or between characters. If I opened up that conversation more often, I would probably spend an hour debating about what character should do what with a reader," says Aderinokun

While lifelike storylines take precedence, Aderinokun is also keen on making the comic accessible to more than a Nigerian audience in many ways. The comic, which is peppered with Pidgin English, also includes a glossary for those not familiar with Nigeria’s colloquial lingua franca.

“I had some guy from America interview me, and he said that when reading JAND, he realized that our cultures aren’t that much different from each other, and that’s what I want the comic to do,” says Aderinokun.

“I want to show non-Nigerians reading JAND that we’re not that different from you, I want to prove that although we’re from different cultures, at the core, our stories are the same.”

See some examples of Jand below: