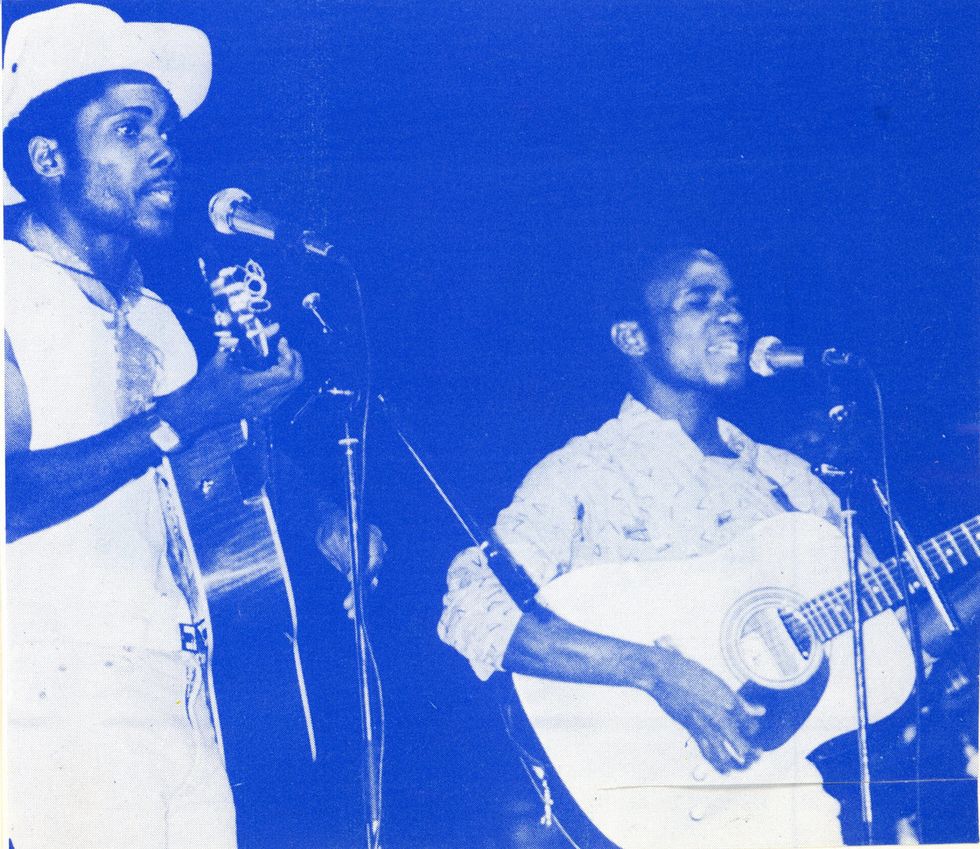 Jess Sah Bi and Peter One. Photo courtesy of Awesome Tapes From Africa.

We talk to the Côte d'Ivoire duo about their classic 1985 album, Our Garden Needs Its Flowers, which was reissued earlier this year.

Songwriters Jess Sah Bi and Peter One met in Abidjan, Côte d'Ivoire as college students during the early 1980s. Bonding over a mutual love of grassroots country acts like Don Williams, Kenny Rogers and The Eagles, the musical duo wrote and recorded an album of country songs called Our Garden Needs Its Flowers.

These tracks were the first of their kind, performed in French, English and Gouro for maximum audience exposure. The fresh, yet familiar new sound appealed to young and old listeners alike, quickly sparking a nationwide craze of country, folk and Americana music. The 8-track classic album was reissued this summer on Brian Shimkovitz's popular music blog-turned-record label Awesome Tapes From Africa.

Before Jess Sah Bi and Peter One released their collaborative LP, country music in Africa was largely synonymous with rich, educated, high-class society-types. Up until that point, comprehensive listening of country music demanded an English education, but the duo wrote lyrics in several languages so they could spread their message both locally and internationally. "Songs that address international issues [like race and economy] are written in French or English," Peter One tells OkayAfrica. "On the other hand I'd rather express my feelings for the pretty girl around the corner in words that make full sense to her."

The college duo wrote about the social injustices and political wrongdoings that they became privy to at university. Equality and freedom are celebrated on "African Chant" and "Apartheid" and pan-African solidarity is described on the album closer "Solution," offering clear answers to the problems plaguing their corner of the world.

It's almost ironic, how a sound so radical for its time period, nearly resembling protest music, could soundtrack this powerful movement with lulling, sleepy rhythms and twangy acoustic guitar riffs. When Our Garden Needs Its Flowers debuted back in 1985, country music sales in America were at an all-time low and a new computerized studio production aesthetic changed its sound to the core. Meanwhile, across the Atlantic, a West African folk duo was using country music to start a cultural revolution.

Reggae was the number one source of African protest music in the 80s, Peter explained when I asked him about the role of his music when it first released: "My songs are not just for protest. They are more to bring people together beyond races, religions and nationalities. What music can better serve that purpose? Country and folk with the richness of the sounds are really the best fit to bring such harmony in society."

Peter One first developed a love for country music through its unique physical feeling. "Country music and folk music where not [heard] frequently on the radio nor on the TV," Peter recalled about his early relationship to the genre, "But every time I had the opportunity to hear some, it would ring the bell in me even though I could not understand the meaning of the songs. So much that when I started learning guitar I was first interested in learning this style of music."

As a student, Peter gravitated toward the music of Cat Stevens, Simon & Garfunkel and Crosby, Stills, Nash & Young in the country music universe, but his ears absorbed all he heard. "I used to listen to African, European, American, Caribbean, Latin American and even Arab and Indian music," Peter writes in an e-mail. The disparate influences, in addition to the traditional folk songs his mother would sing to him as a child, all make their way to Our Garden Needs Its Flowers. It's why the album stands the test of time in such a prolific way.

Peter One and Jess Sah Bi's legacy has been echoed by an impressive string of African country musicians and producers who follow the tradition of Our Garden Needs Its Flowers. Jess cited "Ismaël Lô from Senegal and several groups from Côte d'Ivoire" as inheritors of their success, while Peter chose to highlight "The Moya Melody Band, The 5 Etoiles, Ken Adamo who is a music producer right now in Abidjan, and Eduku who is a great talent in Abidjan."

When I ask Peter One if he thinks Our Garden is responsible for any direct political change in Africa, he meets me with a modest yet powerful response: "I think the word "responsible" implies too much power. All I know is the Republic of South Africa banned Apartheid in 1990. Nelson Mandela walked out of prison, became President and there were no fights between races in that country.

BBC Radio even played "African Chant" the minute Mandela was walking out of the prison gate. The Republic of Namibia became independent shortly after that. Is all that under the sole influence of Our Garden Needs Its Flowers? Not at all. Did the album contribute to raise awareness about the political reality in those countries? Probably."

'Our Garden Needs Its Flowers' is available now.