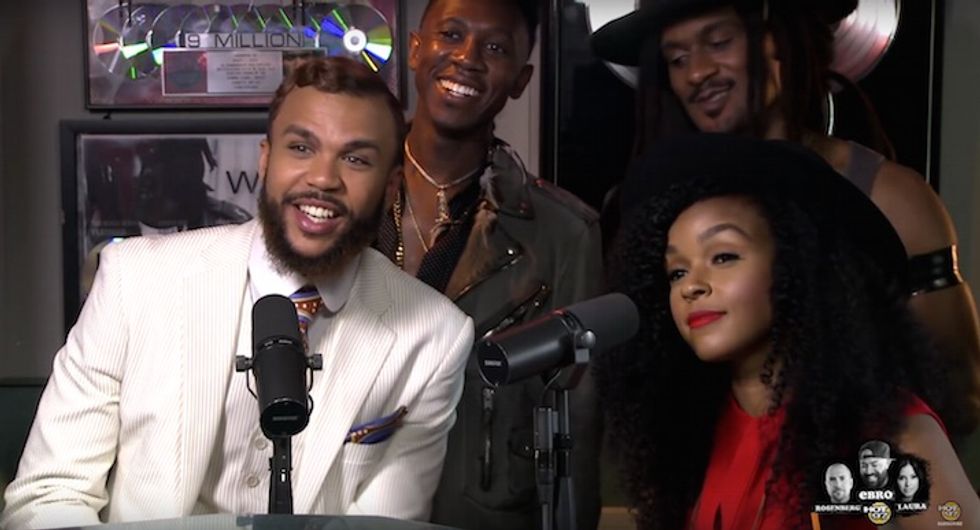 Jidenna discusses his Nigerian Twitter controversy and how "Nigerian excellence" inspired "Classic Man" in an interview with Hot 97.

Last month, "Classic Man" emcee Jidenna unknowingly unleashed a storm on Nigerian Twitter over comments he made during an interview with the U.S.-based hip-hop video news site Vlad TV, in which the 30-year-old Nigerian-American artist was asked to respond to how being light-skinned and having a certain texture of hair has affected how he functions within the Black community. He responded to the backlash by penning an open letter addressed to his "Nigerian brothers and sisters."

In an appearance on Hot 97's Ebro In The Morning alongside Janelle Monáe and Deep Cotton last week, Jidenna spoke at length on the controversy and offered further insight into his Nigerian heritage.

*Jidenna's comments about Nigeria begin at the 11:00 mark

When asked how it all [the controversy] transpired, Jidenna responded:

"The controversy, or wahala as we call it in Nigeria, started when I made some comments on Vlad TV about my father's burial, which is really a very personal thing, and unfortunately that wasn't focused on at all by my fellow Nigerians– I was hoping that that was the focus, but you know, things go the way they go. When I went to bury my father, my family in the village said, 'you know, you have to take some extra precautions,' because at that time, the specific area that we were from, it was the highest kidnapping rate in the history. So to travel along that road to our village that I know very well, which was already a road that has some challenges and some obstacles in place, my family said, 'look, you're a foreigner, you're an American, and your appearance, you being light skinned, or what some people say is mixed... because you're a foreigner, because you're light skinned, you have the perception of wealth. So that's all I was talking about, is that because of that I had to take some extra precautions, which in Nigeria we call a MOPOL, or mobile police. And I was talking to Vlad, who is not Nigerian, who is a white man, and to really communicate to him I used certain words, which is true, mobile police don't carry handguns, they carry AK47s. And they are in military uniform. That's who I rolled with just to bury my father, and really I was just opening up about my own experience, because when I was five, I was in an armed robbery and a kidnapping with my family. So I've been through it, it's not something that I'm just saying."

He also shed some insight into the particular "excellence" that inspired "Classic Man":

"Nigerians are proud, we care about excellence. So the moment you have some little misstep, or what could be perceived as a misstep, everybody around you... and I love that though... I always tell the story about my father, when I first came to America, and I'm like six-years-old. You know in school, when you get a good score, the teachers like, 'Bring it home, and you can hang it on the fridge for your mother.' So I brought it home, and I was like, 'Dad, I got a 98.' And my dad's like, 'Ah ah, where are the other two points? Go and get them, then bring them back.' And that's how it is, those two points matter in Nigeria. And that's a beautiful thing. And that's actually what inspired "Classic Man," that excellence for me in my personal life comes from being in the Nigerian community, as well as the African-American community that I'm in, and Wondaland as well. So all that was inspiration. And I think we cleared up the miscommunication, everything is gravy now."

Jidenna also appeared on 105.1's The Breakfast Club last week, where he mentioned that he has plans to do a few shows in Lagos.