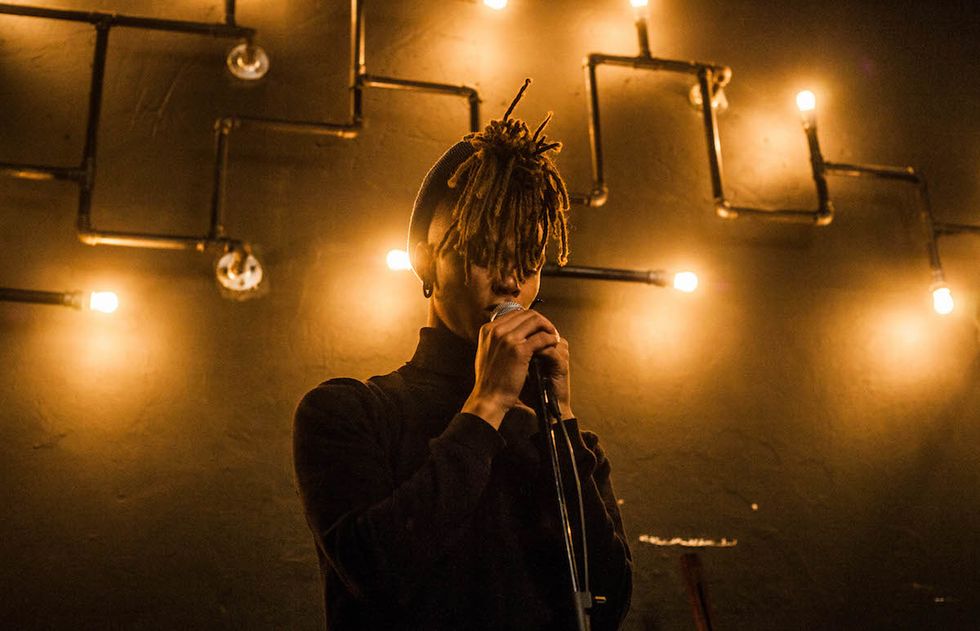 Joshua The I Am puts effort in his visuals.

South African hip-hop music videos are getting mundane by the day. It's always the same shit—party scene with plenty of light skinned women dancing aimlessly while the rapper recites their rhymes. Add a fancy car as a backdrop.

Riky Rick has been one of the few artists who have consistently put an effort behind their music videos for a long while.

But time flies and Riky is not new school anymore. Enter the Joburg-based rapper Johsua The I Am, who just released his new music video for the single "Glitch."

The video launch was coupled with a mini exhibition of Joshua The I Am's portraits curated by the man himself at Mama Africa in Maboneng, Johannesburg. The photos being exhibited had graphic embellishments, the work of Joburg-based illustrator Seth Pimentel.

The mini exhibition at the video launch. Photo by Sabelo Mkhabela.

There was a computer gaming station on the corner of the venue to commemorate the song's theme (Joshua sings, "Can you pass the controller, I will show you which buttons to press, you know I'm the best at this game," on the song's hook).

Joshua The I Am was the runner-up in the rap reality TV show, The Hustle on Vuzu TV last year. Shortly after the show ended, the rapper was announced as the new signee under Vth Season, the indie label that's home to Big Star, Zoocci Coke Dope, Tresor, and formerly AKA, among others.

"They understand art," says the rapper on Vth Season. "They understood that 'we aren't just signing some trap rapper, but a fully fledged artist, somebody who actually cares about creating something that it's aesthetically and sonically pleasing.'"

The video for "Glitch" shows the MC with the girl who broke his heart (as per the lyrics of the song). The two are arguing, and low-light filters create a fitting mood for a bumpy relationship. Towards the end, you see the rapper wearing virtual reality goggles. There is no chaos in that part of the video. She has clearly passed the controller.

"Glitch" isn't the first video of this kind from the artist. Previous videos for songs such as "Gassed" and "No Return" all showed hints of an artist who wants to do more than what other rappers are offering visually.

Seth Pimentel and Joshua The I Am. Photo by Sabelo Mkhabela.

Joshua's music videos haven't reached their full potential, but he's on the right path to setting himself apart from his counterparts.