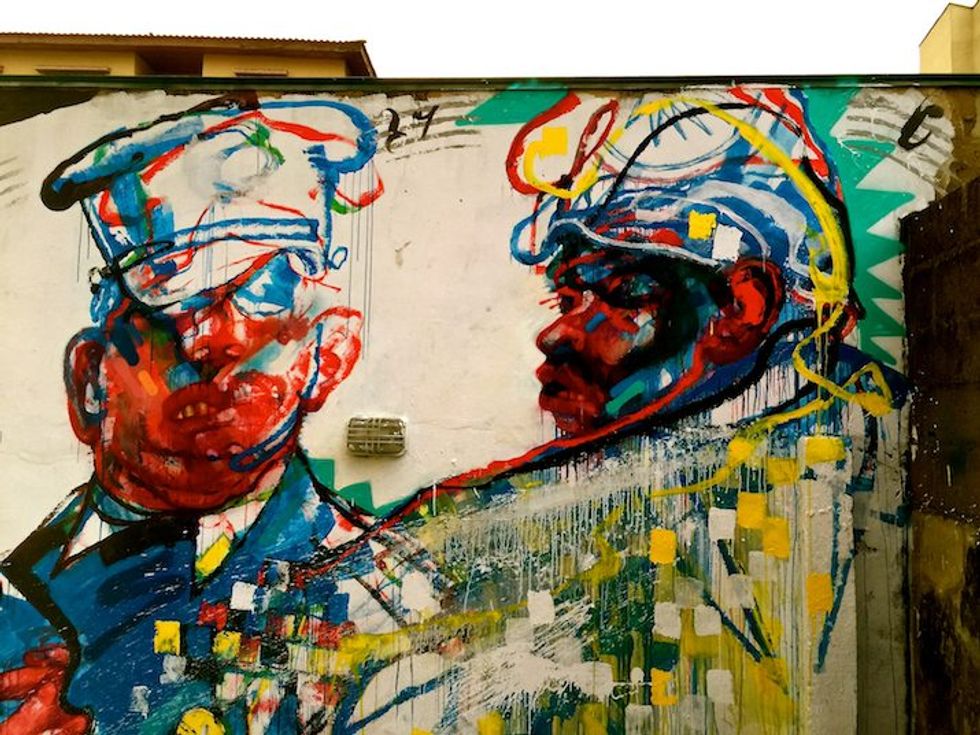 NYC-based street artist sek3 discusses his work creating a mural next to Fela Kuti's tomb at the Kalakuta Republic in Lagos.

Earlier this year, NYC-based artist sek3 was invited to go to Lagos to create a mural next to the tomb of the legendary Fela Anikulapo Kuti. sek3 and his collaborator, Native, spent a week working on the courtyard wall of the Kalakuta Republic, Fela’s former home and self-proclaimed sovereign state, which is now a museum. Okayafrica caught up with sek3 to find out how they got on.

Evelyn Owen for Okayafrica: What was your artistic process? Did you plan the mural at all?

sek3: Native and I were both thinking of this one song, “Sorrow Tears and Blood”, where the military attack the original Shrine [Fela’s nightclub] and end up killing Fela’s mother, who was like the mother of Nigeria. She was completely instrumental in the civil rights movement - a Ghandi, Martin Luther King kind of character. And they threw her out of a third storey window. Fela had been getting in their faces, so that’s what the song is about, and we loosely used the song as a way to tell a story.

Native started out with the politicians and the military, and there are puppets representing that end of things. I was trying to represent Fela, so I just went as colorful and as bright and crazy as I could. I just threw myself at the wall and whatever came out, came out! I was right next to the tomb, so that was a lot of pressure, but it ended up working out really, really well. We couldn’t find any acrylic or brushes, so it was like learning a whole new medium, which almost made it better, because I was so uncomfortable I didn’t have a second to think about it! That pressure helps me sometimes. I build an inner dialogue, a sense of urgency.

OKA: What was the reaction from people who saw you painting?

sek3: So much love, and so much appreciation for what we were doing, and why we were doing it. I had a master saxophone player interpret Fela’s music and write it down in notes, and then I wrote his music throughout the wall. So anyone who can read music can hear the wall as they go by. I’d only gotten a few notes in when some guy came by, and sang it! There’s some poetry to giving Fela a voice from beyond the grave. Anybody who can read music can hear him, by walking past that wall. I was joking that I painted a talking drum, and a talking wall!

OKA: So what is it about Fela that inspires you?

sek3: His music speaks for itself, it’s just beautiful music. But Fela was more than a musician, he was a political activist. He stood up for freedom, he stood up against corruption. When they killed his mother, his response wasn’t to respond violently. He wrote a song about it. The whole song is just this beautiful protest. He couldn’t fight back in any meaningful way except to tell his pain. And to me, that’s the most powerful thing a human being can do, when faced with the darkest corruption and the ugliest treatment, to respond with music, with positivity, with fearlessness.

OKA: Was Lagos what you expected?

sek3: I had no idea what to expect. It was mind-blowing. I can look strange walking down the streets of NYC, because I’m covered in paint and tattoos, but in Lagos I was like a circus freak walking down the street! But the reaction wasn’t hostility, it was curiosity, definitely an awareness of me, everywhere I was. And that was a mind-fuck for sure. It put all of the world into perspective for me. Africa drew it all together in a deeper way.

OKA: So what’s next for you? I hear you have plans to go back to Lagos and build a recording studio.

sek3: Right now, the Kalakuta Republic is more a sanctuary than a productive place. I feel like it’s a meeting place where people feel comfortable, but what I felt from the people there is just too much struggle, where they can’t really swim above it to get into the mode of doing something creative. So I’m going to do an art show here [in NYC], working with the biggest artists I can possibly pull in, and a certain amount of the sales will go down to them [in Lagos], hopefully raising enough money to build a functional music studio. Because at the end of the day, creativity and the ability to express yourself is the most important thing you can give to people.

For more street art from the Kalakuta Republic, keep up with sek3 on Instagram here.