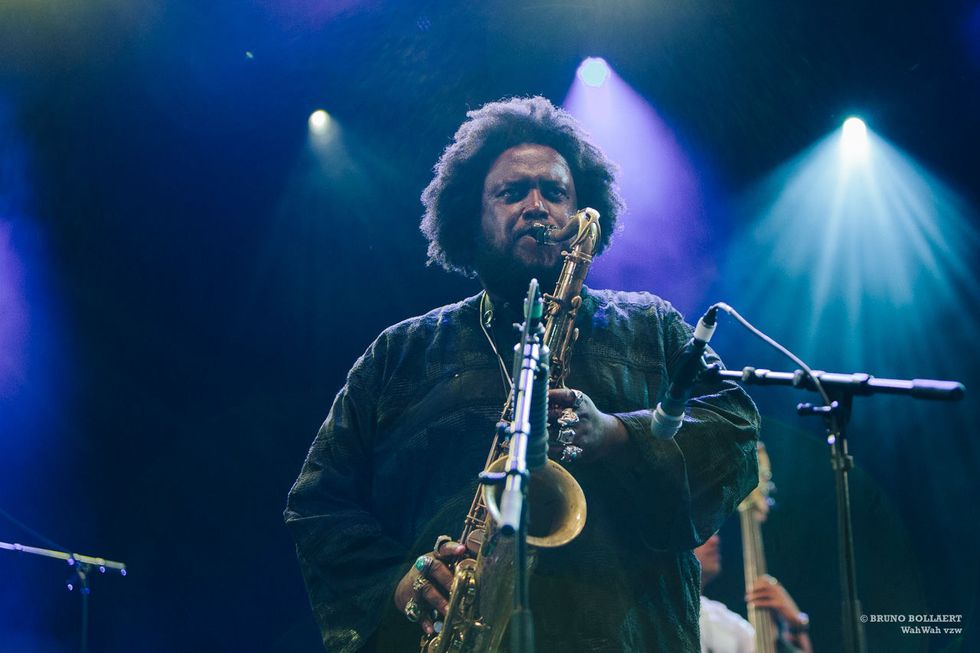 We caught up with Kamasi Washington at the 18th Annual Cape Town International Jazz Festival where he was a headliner.

Kamasi Washington is a generous performer.

The talented saxophonist, who released his debut studio album Epic in 2015, was in South Africa recently for the 18th Annual Cape Town International Jazz Festival, where he headlined Saturday's performance.

As this was his first time in the continent, one would think he'd use the stage to exclusively showcase his talent, but instead he allowed a range of performers to play or sing alongside his band. Having performed with Kendrick Lamar, Flying Lotus and Thundercat in the past, the mild-mannered musician opened up about collaborative work and his love of the evolving genre of jazz.

"When I first got into jazz it was through my dad's record collection," Washington told OkayAfrica about his love of African music. "And his first record that he ever got was Hugh Masekela's The Americanization of Ooga Booga, so when I got into jazz that's like one of the first records he gave me too. I've always been a huge Masekela fan and Fela definitely impacted me a lot."

The 36-year-old contends that while it may not be distinctly heard in his songs, he infuses his love of artists of the Diaspora into his work.

"My music is a fusion of all the music that I listen to," he said. "I don't usually target one thing in any one song. I want it to be the best that it can be, so I pull from anywhere I can."

Washington is constantly around creatives who blend sounds and genres. During his performance at what's considered to be one of Africa's biggest music festivals, he gave his best friend and keyboardist, Brandon Coleman a solo in addition to a quick scratch from Battlecat who was along for the trip.

When asked if he'd ever venture into other instruments, Kamasi kept it honest.

"I can play a lot of different instruments, but the only one to really tap into my soul and express myself is the saxophone... and almost only on tenor saxophone."

Adding, "It takes a lot. When I was younger I would probably spend eight, nine hours a day, so it takes a lot of time to really connect with an instrument like that. The connection between a person and the instrument takes a lot. It's not a free one."

For more on the festival, check out how the Women of Cape Town International Jazz Festival showed the beautiful diversity of "Africa's Grandest Gathering."