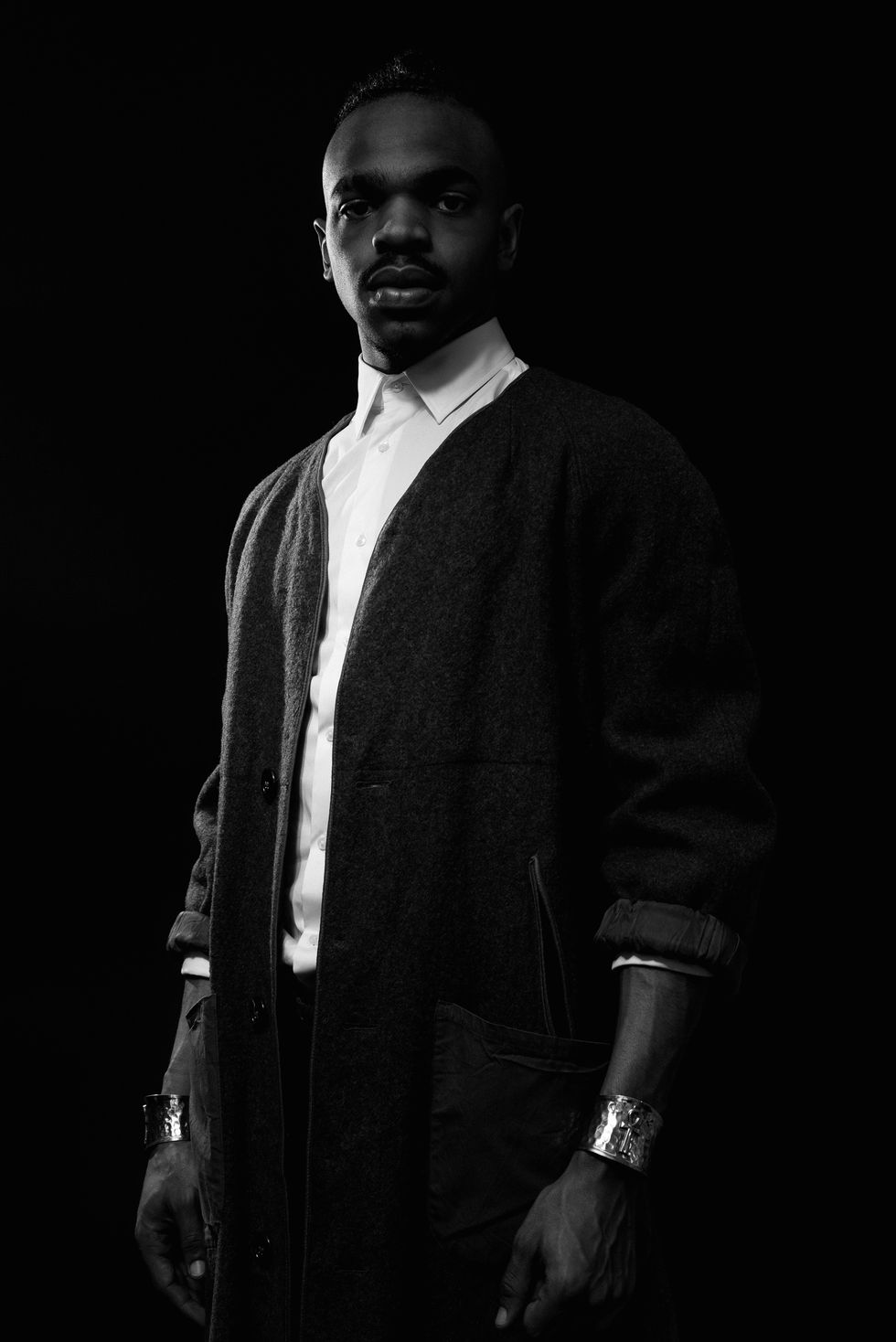 A candid conversation with the Brooklyn based artist, KAMAU, during his first trip to Kenya.

"Would you like some tea?" he offers as we sit at a hotel in Nairobi's plush Westlands district. After delivering an electrifying performance at Thrift Social on Saturday night, KAMAU is surprisingly uneager to take part in any tourist activities while he's here.

"I'm still in transit, going from place to place. It's like a huge amount of processing that's happening right now. I'm not a tourist here, this is my house," he says.

It seems only right for him to begin his African experience in Kenya, the country in which his first name originates from. KAMAU is an aKikuyu name which means "quiet warrior" and as a kid he got frequently teased because of it. While his two other names Mbonisi and Kwame demonstrate his parents' desire to keep him close to the continent, his heritage actually traces back to an assortment of West African tribes like the Tikar of Cameroon and Kru of Liberia.

His latest project, TheKAMAU-CASSETTE:ŭRTH Gōld. is an enthralling and wholesome series exploring various themes of social consciousness, spirituality and love. His music doesn't always conform to genre-tags but this album is lush and soulful when compared to his more hip-hop leaning, A Gorgeous Fortune, EP which was released in 2015.

KAMAU is a gifted rapper-singer whose free-flowing style carries a lot of indigenous and tribal influences. His fashion sense stands out, along with his unconventional sound, and his welcoming aura brings a fresh energy into the room.

One hour in and we still had not officially begun the interview. The conversation has meandered from the Black Panther to politics and race, all subjects which he is very informed and opinionated about. When we finally get down to it, he elaborates in length about being in Africa for the first time, his music and more.

How would you describe your first time being in Kenya and Africa?

Does it smell better or just different?

And what about the light?

The light? [Gazes outside the window] The light's kind of similar to me so far. If I'm staring at it for a while in time I might notice a difference. I won't be able to give an adequate answer to that question right now. I'm not even in that space because I'm not a tourist here. This is like my house. It doesn't matter what anyone says. This is my house. No one can make feel not welcome anywhere especially because my genetic neighborhood is prime.

We were here first. I can go anywhere and I'm home. I'm supposed to be on this planet. In all the places I go, I'm compatible with and I'm supposed to be there. It may take a jacket or something but I'm compatible with all the places people inhabit in Africa, Europe and all the continents. Nonetheless, I'm not really having a tourist reaction. I'm just like 'yo I'm here.' It just feels different being here. You might have to wait till next time to get a proper answer, my eyes are still adjusting.

How did it feel performing for a Kenyan crowd as opposed to anywhere else you've performed?

That was the best performing experience I've ever had in my life. Easily.

Was it the crowd or the energy?

The words 'unorthodox' and 'eccentric' come up a lot when it comes to your music but how would you describe your sound in your own words?

I'm not really good at describing it. I don't know.

So do those words describe it?

Yeah, I mean most people are relatively right when they describe things from where they're sitting, if it looks like that to them. It's definitely unorthodox compared to what a lot of people perceive before they hear my stuff.

And what about your approach to making music?

Usually it's very organic, in the sense that organic things are very environmentally-minded. So like a tree, which is organic .The nature of its existence is heavily influenced by its environment. That's why bonsai is not a type of tree, it's a process. You can take any tree, and you can bonsai it; plant it in a small container. It will still become a full grown tree but within the context of that container.

Do you feel like you've been put in a container?

No… I mean in life there are boundaries. There's nothing wrong with them. Sometimes I stay in them, sometimes I don't. Time will decide which boundaries I'm meant to pass. I use the word organic because what's happening in that moment heavily affects what I make and how I make it. Sometimes I'm in a head space where the melody comes first but sometimes I'm in a headspace where the melody and words come at the same time… but it's organic in that way.

You were telling me before about all your African names.

My name is KAMAU Mbonisi Kwame Agyeman. My father and mother were born under slave names. They wanted to change that trajectory of psychological slavery that's present in almost every black home by starting with the names. Because sound is very important and what I answer to is very important. Any Williams that looks like me is a slave. Any Agyeman that looks like me is just an Agyeman. It's Pre middle-passage. You had KAMAUs before the middle passage. Bam! That's a huge weapon that I have now.

We learn English and we learn the relevance of what blackness is in English. We take Christianity, we know what blackness and darkness is in it. Accepting these identities they give me, means I'm accepting in this European language, the European perspectives of blackness. I was born under a slave name too, and when my parents realized this, they threw away the last names that they had and their first names and middle names. And that's honorable. You don't honor your ancestors by being like them or doing what they did. Your ancestors don't want you to be like them, just like you don't want to be like you last year. You want to grow. A seed that doesn't move doesn't grow. It's a dead seed. My parents wanted us to be better.

How would you say your background has influenced your music?

I think that the more I'm able to remember things from my upbringing or the things that happened before I was born in this physical body… I think that if I'm able to take those things and use them in my motions and just be like nature -because nature assesses what happened, and every species evolves from that. [My background] affects my music because I use it in my music.

When I have children I will hopefully give them the information that I've gained and they'll take that and have a deeper understanding of it. I can do that to a child directly but to all my other children who come through other people, I can touch them through my music.

"A Gorgeous Fortune" was like a story-based project with a single storyline and that's part of a series. "The KAMAU Cassettes" are another series. The "Gorgeous Fortune" series will continue its storyline; they have a narrative string that connects them. But "The Kamau Cassettes" don't really have the same type of narrative string. They have like themes but are more so just fun songs, and things I just wanted to make.

The first "KAMAU Cassette" I did was in college. The second one [Urth Gold], which came after "A Gorgeous Fortune" is just a continuation of that series. When it comes to specific songs, those were brought about by specific things that were happening at that time. A lot of it was created while I was in a relationship and it has a lot of the things that I learnt and experienced from that. So there's like romantic songs and stuff because of that relationship.

And what about the artwork? What's the story behind that?

All The KAMAU Cassettes will have family photos. That's my father.

Wow. Where was that?

In Ghana… yeah that's my dad. The first one has my grandmother on it. Third one will be a picture of my mom or something we'll figure it out.

This album was a lot more soulful than the last project.

Was that on purpose?

No. In retrospect I'm like I'm glad I sung harder on this one than the other one. It's a point of difference and shows a different skill set. So in retrospect I'm glad that that is the distinction between the two.

What are you currently working on and what can we look forward to from you this year?