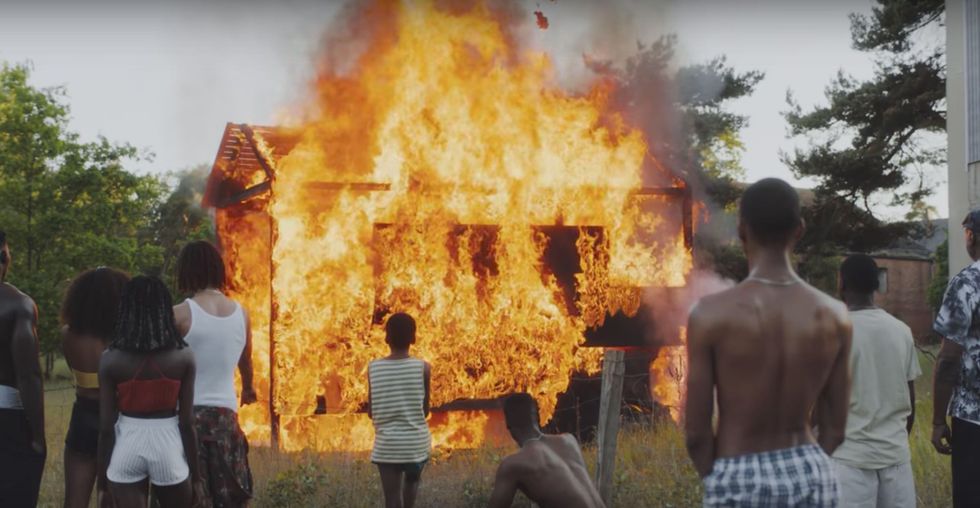 Kendrick Lamar's new video illustrates a nuanced portrait of black life, survival and what it means to be hard.

*This piece does not condone violence*

Two dark skinned women, one rocking a kinky puff and the other with long braids accented by baby breaths, walk down the street, arms locked, a bouquet of blue balloons flowing in between them, as they belt from the top of their lungs:

“If I gotta slap a pussy ass nigga, imma make it look sexy!”

Those women are my friend and I, and this was only two days ago, on the posh, boujie streets of SoHo. I imagine folks were intrigued, others confused. Some may have even taken it personally. This image of us is violently delicate: such a strong juxtaposition of gentleness and aggression and randomness that it is as jarring as it is charming. Dark skinned women, who are taught not to be too loud, too forward with our existence, are even more threatening once we realize the full potential of our power. Throw in the fact that we belted an aggressive rap song is enough to disgust some. The balloons add poetic measure: we float, we sway, to the beat of the wind.

Kendrick Lamar’s “Element” music video implies similar complexities: it is bloody, it is hard, it is violent. Yet, it displays violence in an alluring, elegant form, which contrasts with the stereotypical ideas around violence and hip-hop: that it is terrifying, that it is intrinsic in black people, that it is sewn into our DNA. In “Element”, violence exists alongside beauty, wonder, curiosity and power, illustrating a nuanced portrait of black life, survival and what it means to be hard.

To be clear, I never thought I’d be so moved by a portrayal of violence since viewing “Element”. Primary school taught me that violence is never the answer, but growing up black and awkward in Brooklyn taught me that sometimes you have to fight, to prove or stand up for yourself - or, at least act like you’re ready to fight if the moment arises. The worst thing you could be called is “pussy”, which, in this case, means weak, but actual pussy is far from that. Lamar has expressed in several songs, especially tracks on DAMN., that this dynamic—being hard, being down, standing up to bullies, other rappers, the streets or a whooping from his momma—is something he is too familiar with, and willing to challenge—by refuting it, or giving into it.

In “Element”, violence exists alongside beauty, wonder, curiosity and power, illustrating a nuanced portrait of black life, survival and what it means to be hard.
“Element” is the realization of these dynamics and the self realization of his role in it. The lyrics are blissful and confident, as if aggression is a taste to savor—who brags about making fighting look sexy? In the visuals, violence doesn’t look sexy, but it is celebratory, soft and cinematic. There are three images in particular that reinterpret the musings of Gordon Parks, a stunning photographer: “Untitled, Alabama”, where three children pose, the one in the middle waving a gun; “Black Muslims”, a black and white portrait of black muslim women standing strong; and “Boy With June Bug”, a serene moment in nature, where a black child unites with an insect.

The choice to reincarnate these images seem precise: each represent a moment in blackness that is complicated in America. I couldn’t help but think of Tamir Rice when seeing the boy with the gun, because in our society, that moment could lead to a black child’s death. Conversely, that image reminded me of how prevalent guns are in our culture, even at a young age, and how harmful that can be. The muslim women are powerful and stoic, yet, our nation still has toxic views about muslim people and women of color, and worse, those who are both. However, the child lying peacefully in the grass is hopeful: it reminded me of the secrets we share with nature, the serene relationship that can both heal and humble us.

Besides these magical moments, we see the intense ones. A man punches another, a stream of blood follows. A family watches their home burn to the ground. A boy showers in glistening white rain, so striking it looks like diamonds are blessing his body. A woman silently moves away from her lover. White men behind bars gaze into our eyes. A man teaches a small boy how to fight, only to be found bloody and battered in a later scene. Who did this to him?

All the while, Kendrick raps in a white, blood-stained tee; a narrator of this tale whose hands are unclean in this story.

Violence, it seems, can be found in several places, both usual and unlikely. It can be in the hood, as the news loves to remind us, or in the bedroom—rejection can feel like an attack. It is the calmness of formation, of black people equipping themselves with education, exercise or self love. It is in a boy watching a person fall off a building: trauma, violence of the mind. It is the submission and humiliation of being bitch slapped across the face.

It is the threat, but it is the action. It is in beauty so spellbinding, you are paralyzed by your own infatuation.