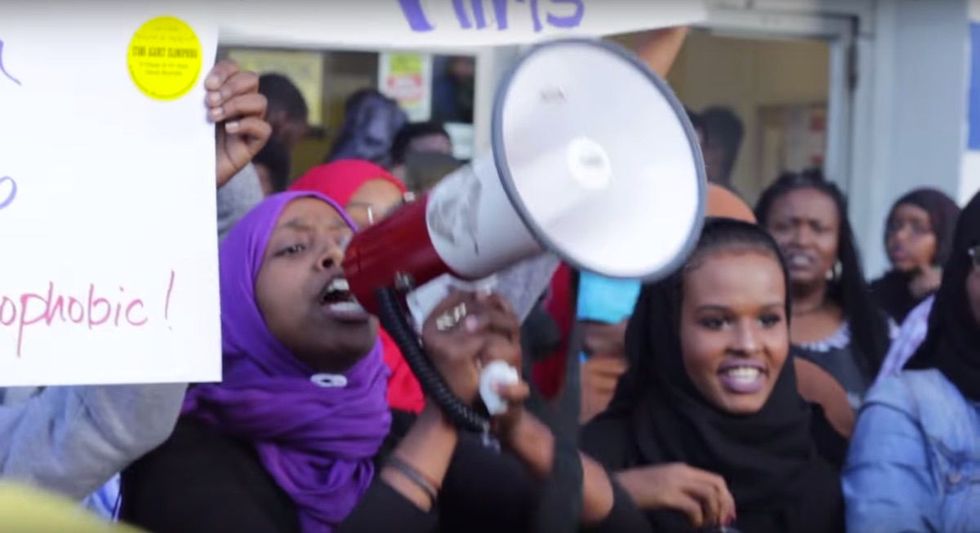 K’naan's performance at a Minneapolis block party was cut short over protests about his new HBO series "Mogadishu, Minnesota."

Over the weekend, K’naan performed at a block party concert in Minneapolis’ Cedar-Riverside—the focal point of the city’s Somali community—in support of a TV pilot for his upcoming HBO series “Mogadishu, Minnesota.”

The celebration was short-lived, however, as about a dozen protesters stopped the concert, holding signs that read, “K’naan and Bigelow — stop exploiting the Somali community,” and starting chants of “Shut it down,” the Star Tribune reports.

The singer left the stage and then things spiraled out of control: police pepper-sprayed the crowd and two people were arrested.

The debate and anger over K’naan’s “Mogadishu, Minnesota” stems from fears that the show will continue a stereotypical portrayal of Somalis and Somali-Americans as terrorists and pirates.

Young activists protesting the show also aren’t happy that Kathryn Bigelow is involved as the its executive producer. Her previous films Zero Dark Thirty and The Hurt Locker, have sparked protest from Muslim communities.

Another issue seems to be that little information has been given about "Mogadishu, Minnesota," which was previously titled “The Recruiters,” and its story.

“I would say that some of the most general themes of the show are addressing how the multigenerational immigrant family — between the second and the first generation — how they process the world through two very different lenses,” K’naan explained to the Star Tribune. “And how in particular, the second-generation young American processes his grievances with this country differently than his parents do.”

@abdiragemo this is awful man, Allah knows it saddens me that my presence had anything to do with this.

K’naan has been holding meetings with the protest leaders since the weekend’s events.

“They actually opened my eyes to something,” he tells the Star Tribune. “Stuck in my own point of view, I was not thinking of how the community could potentially see something like this be damaging."

“There is no precedence for a Muslim Somali man leading the charge, taking control of our narrative, and telling a story that is for them and not against them,” he mentions. “So why should they feel that I can truly be in control of their narrative? When everything about them historically has always been against them. So I have a newfound empathy about that.”

Other local Somali-Americans community leaders have been showing their support for Mogadishu, Minnesota, as the Star Tribune reports:

Many other local Somali-Americans see the TV pilot as a rare chance to boost the community — both in the form of jobs related to the production and by presenting on-screen for the first time a story told from the Somali Muslim point of view. K’naan will do justice to the story, they say, because he is directing, writing and is executive producer.

Mohamud Noor, a community leader, is among those supporting the HBO show, because it was conceived and is being led by “one of our own.” Amid Saturday’s mayhem, he said: “The youth have every right to be angry about something they know nothing about. But it should not have escalated to this level.”