KOKOKO! Is the Raw, Alternative Sound of Kinshasa 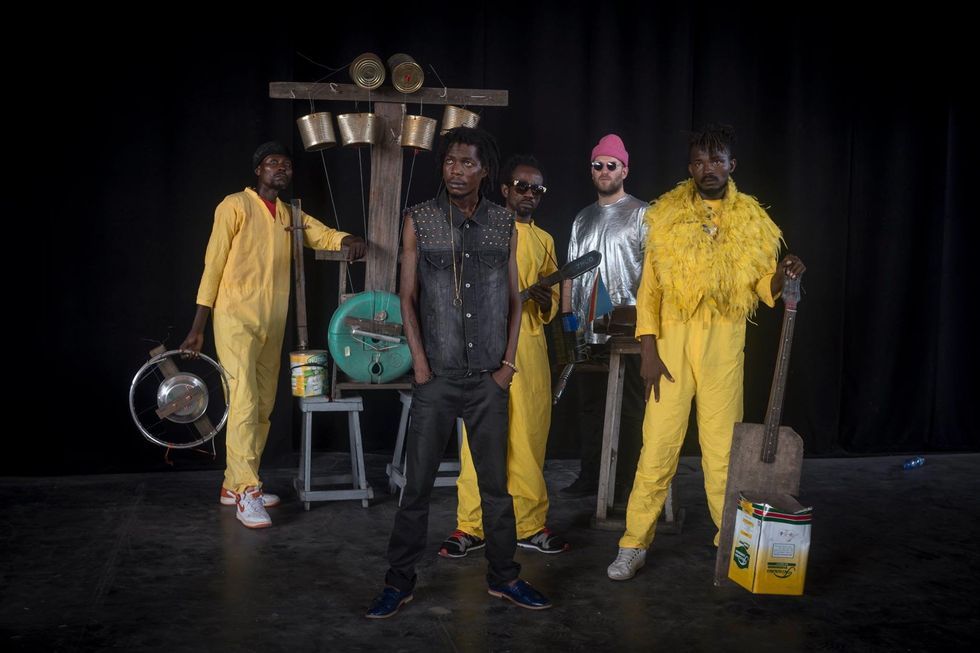 KOKOKO! and their innovative, handmade dance tunes come out of the burgeoning city of Kinshasa.

KOKOKO! consists of French producer Xavier Thomas (aka Débruit) and a team of rambunctious musicians from the Ngwaka neighborhood, including vocalists Makara Bianko and Love Lokombe. The physicality and punk-spiritedness of Bianko's performance stems from his weekly residency gigs in the Lingwala neighbourhood, where dancers and musicians equipped with self-designed instruments make magic.

That same DIY integrity seeps into the music of KOKOKO!, where guitars are created from coffee cans and unique percussive kits are recycled from water jugs. The band employs these distinct, urban sounds in both studio recordings and live performances, tapping into the energy of Kinshasa's rampant party scene and growing soundsystem culture.

Following KOKOKO!'s explosive debut EP, Tokoliana / L.O.V.E., the band returned with another two-track release of exciting new music titled Tongos'a / Likolo late last year. Producer Débruit (who previously shared an album of gorgeous songs recorded in and inspired by the city of Istanbul) exercised his sharp wit for electronics and house-aligned rhythms on the first EP, but the second effort makes a concerted effort to subdue some of those synthetic inclinations.

Originally written and performed by Love Lokombe as a solo acoustic number, "Tongos'a" pairs African dance pop with deconstructed noise rock for a shockingly synergistic combination. Its lyrics are no less provocative, stressing the importance of proper and thorough love-making that doesn't let up until the early morning.

B-side effort "Likolo" flips the lyrics of a traditional Bateke funeral song, reconfiguring its somber meaning as something hopeful and spiritually-enlightened. Lyrics that loosely translate as "we are all naked bodies under the sky / we all know how it's going to end" work to unpack the irony and dark humor of death and mortality–as it's seen through the members of KOKOKO!. It's subversive, wonderfully complex songs like this one that highlight the bright future of this exceptional Congolese project.