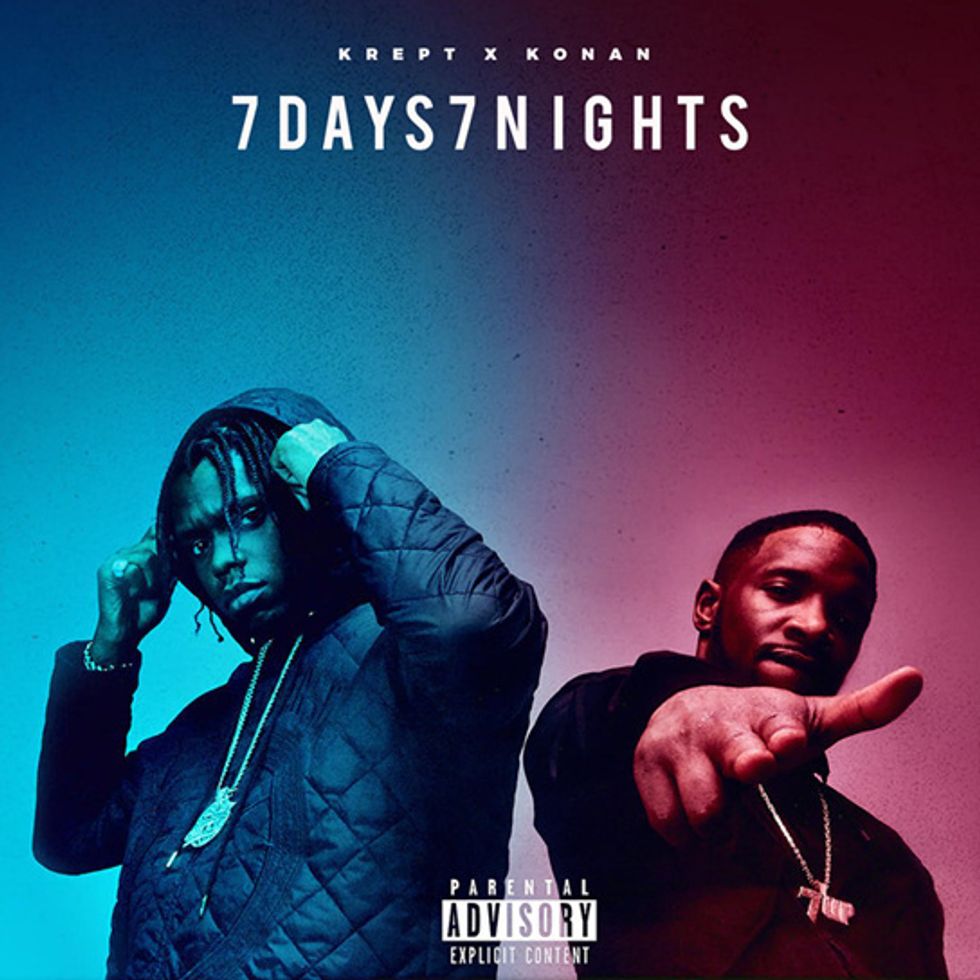 London duo Krept & Konan are back with two new mixtapes featuring Stormzy, Skepta and others.

For their first major release since The Long Way Home (2015), Krept & Konan have dropped a pair of projects: the hard edged 7 Daysand the tender renderings of 7 Nights.

On 7 Days, the pair ride solo in separate songs that are labelled "freestyles." Krept puts on his conscious hat on "Cold Summer - Krept Freestyle," a track in which he praises women, decries racial injustice and laments crime levels in black communities, "they don't even need to kill us now, they give us the guns and we kill ourselves."

Konan's own freestyle "Last Night in LA - Konan Freestyle" is preoccupied with tough talk and self-affirmation but closes with a show of selflessness "the endz is fucked and they blame us for it / so you know, what I made a foundation to make up for it."

The duo excel on the drill and haze of "Wo Wo Wo," the lead track off 7 Days, in which a playful and catchy chorus is well matched to a slow and menacing EY beat.

Stormzy adds real bite and gravitas to "Ask Flipz," a track that features the same restless metallic melody and percussion heard on "Cold" from Gang Signs & Prayer, though Krept & Konan don't cede much ground to their guest by delivering equally bold verses with attitude.

Adotskitz had a hand producing 5 songs on 7 Days, one of them, "On My Life," sounds like a good riff on beats by Skepta ("Hypocrisy", "Skepta's Interlude"). To have Skepta feature on the track makes the resemblance more apparent but also makes it an easy sell to fans of the tested grime formula, some of whom will bristle at the provocation in the lines "I bought weed with my EMA, fuck Theresa May."

Moving on to 7 Nights, one of its highlights is its only afrobashment song "For Me," which beautifully contrasts the soothing melodies of radio R&B with the growl and patois of dancehall.

Jhene Aiko, a specialist in the hazy and narcotic style, lends real tenderness to "Wrongs," subordinating Konan's passable singing. Lines delineating genres could easily blur with simple key changes. This is made evident here when the sunny R&B radio bass guitar changes into bashment and back—shifts that characterize the Krept & Konan's ease with contemporary genres.

Tory Lanez is recruited to virtually channel Drake's shouty renderings from "305 to the City" in "Same Sh*t," which he does quite well.

Krept & Konan's tinkering with spaced-out Trap&B pays off on "So Lit," which is buoyed by Deputy's druggy beat and a solid hook.

You'd be forgiven for thinking it's Kehlani on "The One" in the same way you'd think it was Rihanna on "Cigarettes and Kush" by Stormzy before checking the credits. The duo earn no points for simply recreating in composition and cadence, a decent album filler on Gang Signs & Prayer, the biggest grime album of this year without any interesting additions, or subtraction for that matter.

Hudson East features on three songs "Save Some," "Ride For You" and "Take Time," decent compositions which keep with the theme of bedroom music.

Knowing that much of the soundscape and preoccupations of 7 Nights is drawn from Drake's Nothing Was The Same (2013) is what may spoil the enjoyment. Another listener unencumbered by such hangovers might be impressed and satisfied by these cozy recreations—and wouldn't care for its lack of new musical ideas.