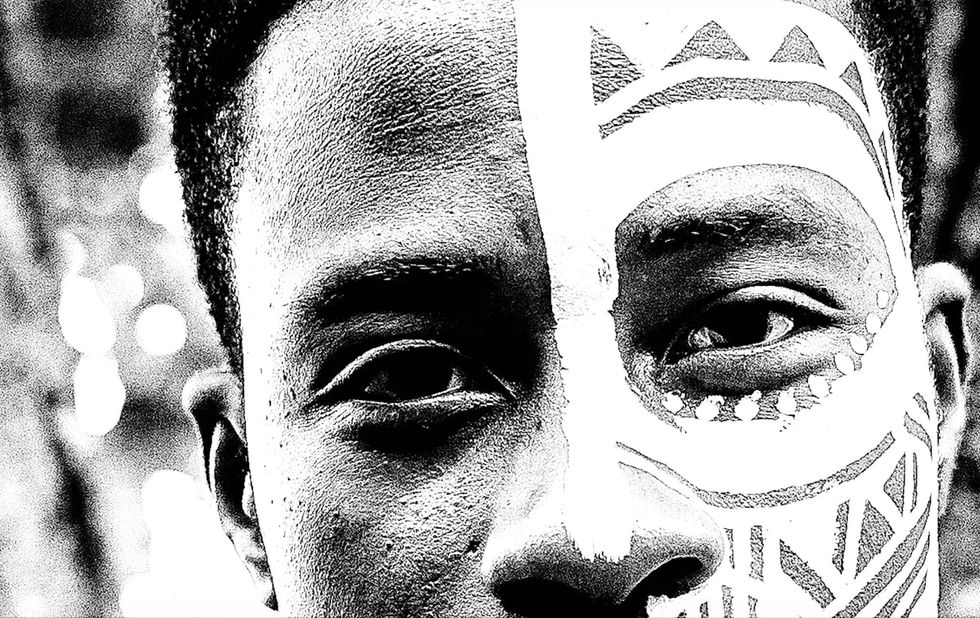 In the past year, the Sacred Art of Laolu Senbanjo has taken off. From Beyoncé to Ibeyi, to Alicia Keys and Swizz Beats, to Jidenna and Black Coffee, the Nigerian-born visual artist and musician has become a painter to the stars, and in the process, a star in his own right.

It’s been just over three years since the former human rights attorney left Lagos to become a full-time artist in Brooklyn. Since moving to the U.S., Senbanjo says he feels blacker than ever.

“Whether you like it or not, as an African living in America, if you’re Black you kind of inherit everything that Black people go through here. You inherit everything Martin Luther King, Jr. said,” he tells me just a few hours before Americans will begin heading to the polls to elect their next president.

While Senbanjo has never been one to shy away from social and political issues, he’s becoming increasingly more vocal about it.

It was Jesse Williams in particular that inspired an unshakable civic duty in the artist. Senbanjo was in attendance at the 2016 BET Awards in Los Angeles, where the outspoken actor and activist gave his groundbreaking speech on racism in America. That was when Senbanjo made up his mind to use his voice as an artist.

“People are beginning to understand the fact that art can actually be used to translate ideas and tell a message. It’s a unique space to be in and it’s something that I cherish,” he says.

Through the popularity of his Sacred Art of the Ori, and with a little help from social media, Senbanjo sees himself as a bridge connecting African-Americans to Africa and vice versa. “Not everyone has that road to be able to live in both worlds almost at the same time,” he says.

It’s a bridge and road that he explores on his new song, a Yoruba-language hip-hop tune which we’re excited to premiere here today on Okayafrica.

Produced by the New York-based Simon Sez, “Mama Africa” opens with an excerpt from Williams’ powerful BET Awards speech (“Just because we’re magic doesn’t mean we’re not real”) and those familiar notes from Beyoncé’s “Formation,” an obvious spiritual and political inspiration for the song and its accompanying visuals. (Incidentally, Senbanjo lent some spiritual and aesthetic inspiration to Lemonade.) In it, the painter-slash-rapper looks at his ancestry and roots on the Continent alongside the Black experience in America.

My People, please I am urging you all to do your civic duty and do what I (and many others) cannot V O T E. Your Vote for the next American President impacts more than just the US but the World as a whole. If you can, vote early, if not make sure to get out and VOTE this Tuesday. #rockthevote #imwithher #dumptrump #makeyourvoiceheard Muse @skiinnyminnieproject

Now more than ever, Senbanjo feels it’s time to use his voice as a cultural ambassador of Africa. And while he isn’t able to vote in Tuesday’s election, he’s using his platform to encourage others to do so.

“Mama Africa,” he tells me, is a challenge to his brothers and sisters in the Diaspora—African-Americans that can vote—to use their voice and vote in today’s U.S. presidential election.

“Their voice speaks for those who can’t vote, immigrants like us that aren’t citizens of America.”

Today's election, he says, is important not just to America but the entire world. “As an immigrant, you hear some of the things in this campaign, and you’re like “What exactly is going to happen if Trump becomes president?”