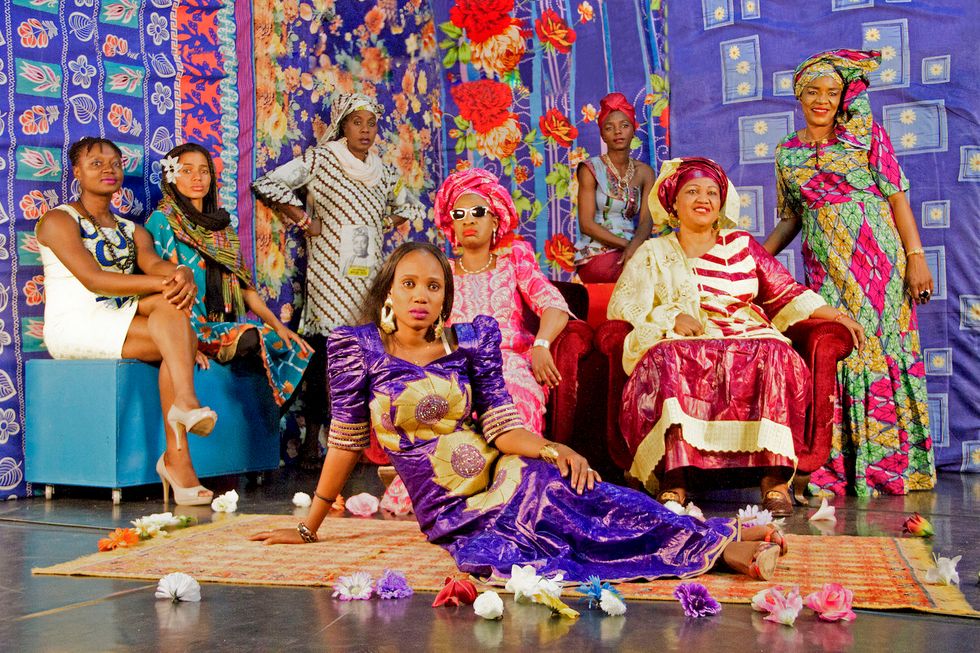 One of year’s most moving and socially-charged records comes from the all-female supergroup Les Amazones d’Afrique.

Hailing predominantly from Mali and other West African countries like Nigeria and Benin, the band’s thoroughly excellent debut album uses the power and verve of progressive pop to tackle issues relating to female inequality.

The group display power in numbers, channeling the Dahomey Amazons militia from the Kingdom of Dahomey (located in present-day Benin), the first and only documented frontline female fighters in modern warfare history.

République Amazone is a reference to those female warriors who were enlisted by the king and fought to maintain their empire for two hundred years. The last warrior died at 100 in 1979, but the impact of these women directly influenced how women in Africa were viewed. Often sworn in as virgins, Dahomey Amazons commanded respect with their incredible reputation as fighters. By law, men weren’t allowed to touch or talk to them. They lived without men and provided for themselves, sometimes as an alternative to a life of sex work.

Les Amazones d’Afrique recognize the amount of work that still needs to be done for women to attain the same rights as men. They sing about it on the record’s lead single “I Play The Kora,” a massive collaborative effort that features six of the supergroup’s members. The title itself is a statement of empowerment, demonstrating how African women can occupy roles traditionally reserved for men. All proceeds from the single were donated to a Congolese foundation and hospital that aids survivors of sexual violence.

There’s a lot of star power on this album, but some of its most interesting moments arise from collaborations with lesser known acts—or, rather, lesser known in terms of this star-packed group. As the only non-Malian member of Les Amazones d’Afrique, excluding Angélique Kidjo, Nigerian reggae-soul artist Nneka is an outlier. Her graceful style and charismatic vocal presence tap into a youthful, more audacious kind of pop, as showcased by her contribution to République, “La Dame et Ses Valises.”

Despite its French title, this groovy and freewheeling trip-hop jam is sung in English, its verses exploring the strength necessary for a woman to remove herself from a violent or emotionally abusive situation. “When things go wrong, you must walk out...You can’t go on in this, you can’t go on,” Nneka pleads on a soulful hook over a deceptively carefree beat.

The achievements made on République wouldn’t have been possible without Malian drummer Mouneïssa Tandina, perhaps the most famous female drummer of the West African coast. Working in concert with executive producer Liam Farrell–an Irish multi-instrumentalist who previously crafted the left-leaning industrial feel of Mbongwana Star’s critically acclaimed 2015 LP–Mouneïssa lends her three decades of experience as a seasoned drummer to bolster to overall mood of this deeply versatile record.

The idea of a white man making executive decisions about how a contemporary afropop album should sound is potentially problematic, and certainly ludicrous, but Liam Farrell (aka Doctor L) is exceedingly reverent toward these female artists and their musical roots.

On each of République’s twelve tracks, he cultivates a new evocative soundscape, playing to the individual strengths on each featured artist. “I’d say [my role is] more like a moviemaker– you meet artists and you work with them,” Liam explained in an interview with The Fader, “To me, music means bridges. I produced it in the direction of the people that I met, so it’s been created from my point of view but for them.”

Producers like Doctor L are vital to the growth of contemporary afropop innovations. His ethically sound methods for cross-cultural collaboration are executed respectfully and thoughtfully. Pushing the music forward without ever compromising its integrity, Liam shapes République as a message of charity, power and unbridled femininity.

Watch our premiere of Les Amazones D'Afrique's "Dombolo" music video, directed by Amandine Le Roy, above and stream the album below.