Les Nubians Take Their New Sound To The Stage 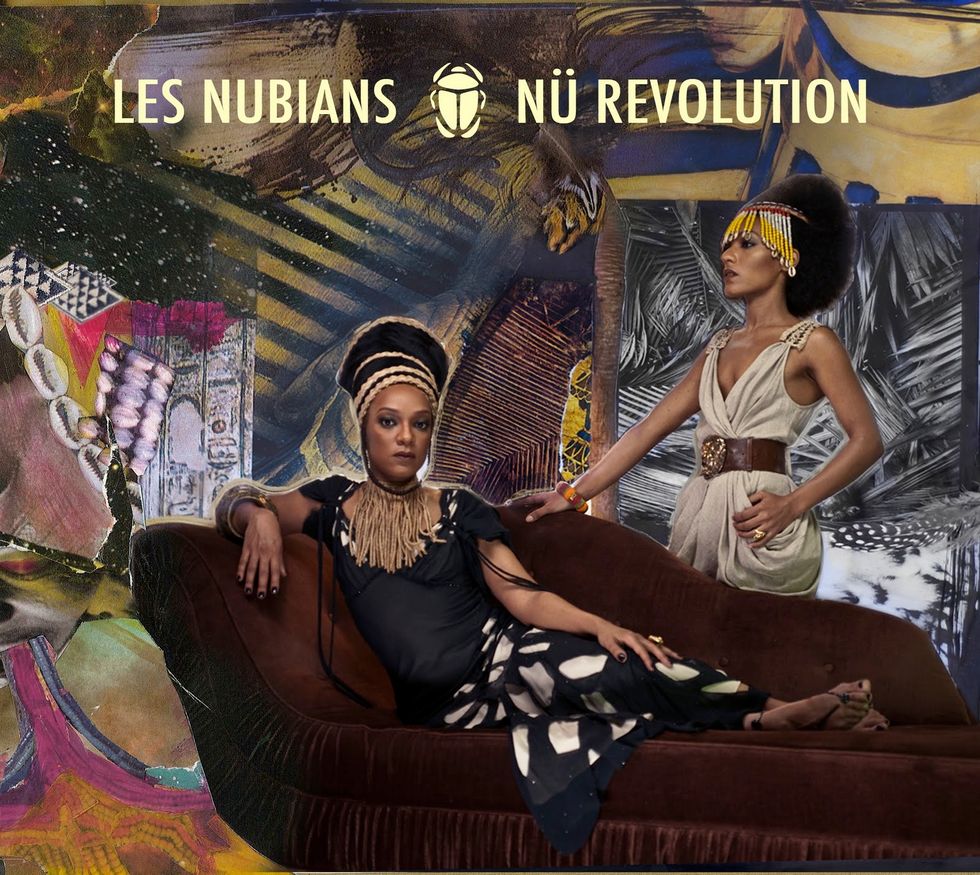 Hol' up, hol' up, so these chicks ain't had an album out in 6 years, mainly sing in French (sometimes in English), no radio play since '99, no videos in a hot minute or any other mainstream press and they just sold out a big auditorium Thursday in downtown Philly? Philly ain't nothin' but some haters, who are these chicks, ock?!

None other than the beautiful talented Les Nubians were chosen as "cultural ambassadors" for the Philadelphia International Festival of the Arts. PIFA's theme for the year was the 100th anniversary of Paris' cultural uprising in arts, music and politics (see ?uestlove Goes Classical for more on this) and who better than sisters Hélène and Célia Faussart of Les Nubians, with their French-African backgrounds (with roots in both Cameroon and Chad), messages of Nü Revolution, dreams, le femme mystique, poly-ethnic bandmates and Pan-Afropeanism to set it off.

On a pitch black stage, the band runs out their instruments with police sirens wailing over the speakers. "Les Gens," from the just released Nü Revolution album opens up the show with it's French chorus about saying no to the haters, in case there was any doubt about the ladies not being able to hang after all those years away from the stage (were they trying to say something about Philly??).

The percussionist and drummer seemed to have a special chemistry, playing off each other perhaps more than other members of the band - but this didn't disturb the collective groove. Aside from their Sade "Sweetest Tabou" cover, the classic "Makeda" from Princesses Nubiennes, and a small medley of tracks from One Step Forward, there's very little visiting of their past albums at this show.  Most of the material they cover is new, reflecting the ladies' focus and inspiration from change occurring right now, felt clearly throughout Nü Revolution. Hélène tells me before the show. "The way African people have taken to social networking affecting social and cultural change, the growth of the middle class in African nations and the cultural movements in Africa's urban centers are big inspirations for this album. 50% of Africa is under 18 and we're so inspired by current changes and the future."

Feminine consciousness has always been at the core of Les Nubians and their focus on a more uptempo sound for the show and the new album came from a very honorable muse: "Our mother mentioned our songs being too serious and said a heavy heart needs a release," said Célia. "So, from our mother and the fact that uptempo dance songs are of the time right now - these are part of the reasons for Nü Revolution's sound." There was much talk about "the power of the P" (don't need to explain that one, do I?), gyrating dance motions and feminine persuasive wiles to encourage more audience dance participation and call and response for the last round of tracks at the show's end. Local Philly femme native Carol Riddick was brought out to sing for "Femme Polyandre."

Though the ladies have been turned off by many negative messages in hip-hop lately (inspiration for some songs on the album like "Afrodance"), they still embrace hip-hop culture and new music. Hélène - "We're loving African hip-hop right now, just seeing how African MCs are finding their own voices and not just copying US artists." Célia is inspired by "Myra Maimoh, she's like the Cameroonian Jill Scott, and Franck Biyong." It seems as if Les Nubians are Afro Futurism without a marketing gimmick.

For more on Les Nubians, check out the feature on Okayplayer.com.