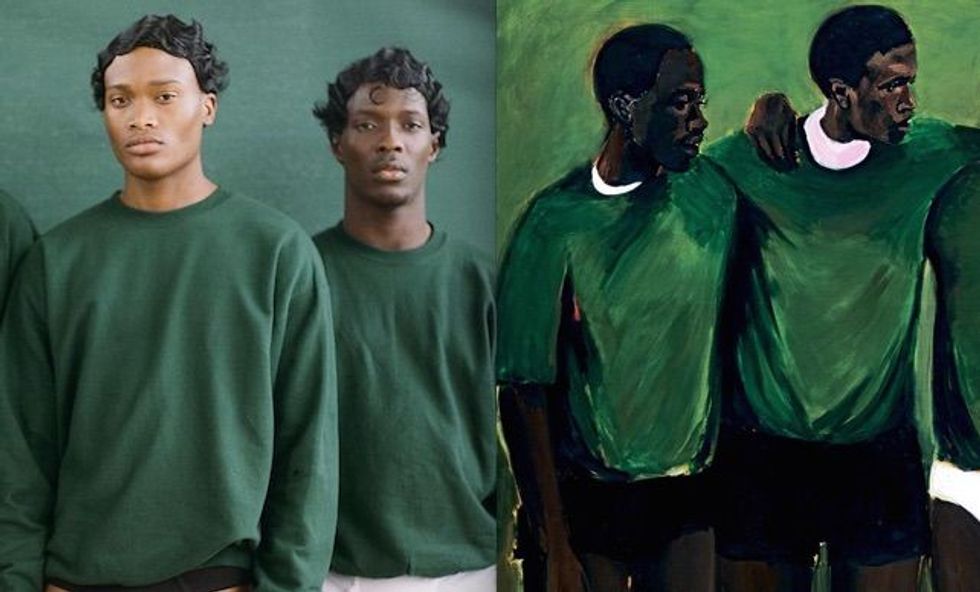 British-Ghanaian painter Lynette Yiadom-Boakye has emerged as one of the biggest influences on Solange’s new album, ‘A Seat At The Table’

The list of collaborators and influences on Solange’s new album, A Seat at the Table, runs deep through the African diaspora. From the Sierra Leonean-rooted Sampha and Blood Orange to Ethiopian-American singer Kelela, British-Ghanaian producer/singer Kwes, Nigerian producer and Metronomy member Olugbenga, Ghanaian-American singer Moses Sumney and a number of others, the diaspora has a strong and notable presence on the Saint Heron founder’s first official project since 2012’s True EP.

That presence extends to the visual arts as well.

Like the 21 tracks on A Seat at the Table, the art of Lynette Yiadom-Boakye is beautifully and unapologetically black. It makes perfect sense that the London-based British-Ghanaian painter, poet and writer––who in 2013 became the first black woman to be shortlisted for the Tate Museum’s Turner Prize––might inspire the creation of her new album.

Prior to Friday’s release, Solange took to Instagram to show major love to Yiadom-Boakye.

“Thank you #lynetteyiadomboakye for being a great source of inspiration and courage during my writing process....This one is for you,” she posted on her @saintrecords page.

Thank you #lynetteyiadomboakye for being a great source of inspiration and courage during my writing process....This one is for you... Check out lyrics and a photo journal from the #aseatatthetable album on www.solangemusic.com

And that wasn’t the only time the singer has credited Yiadom-Boakye this past week. A few hours prior to the album’s release, Solange sent a list of inspirations––things she referred to while making A Seat At The Table––to Stereogum Senior Editor Tom Breihan. Alongside Lauryn Hill’s MTV Unplugged No. 2.0, D’Angelo’s “Africa,” the town of New Iberia, Louisiana, Minnie Riperton and several others, was none other than Yiadom-Boakye.

The artist’s influence became all the more clear with the release of Solange’s gorgeous “Don’t Touch My Hair” video, which the singer directed alongside her husband, Alan Ferguson. As The FADER points out, Twitter user @joshjenks noted similarities between the song’s visuals, which Sampha also features in, and Yiadom-Boakye’s oil paintings of black men and women.

Love how Solange is uplifting Lynette Yiadom-Boakye's work in hers. This piece is called "Complication" (2013). pic.twitter.com/KHXWCJnCGl

The artist’s influence can be found in the accompanying digital book as well.

“Visually, the album’s zine with its dizzying design of lyrics finds a new way to communicate the themes of black sister- and brotherhood the singer has long explored,” writesW Magazine’s Antwaun Sargent. Sargent continues: “In the photographs released with A Seat at the Table, Solange reinterprets the British-Ghanaian artist Lynette Yiadom-Boakye’s vivid portraits of black figures into group scenes shot in nature and New Orleans, where the singer lives and draws artistic inspiration from.”

As the beauty of A Seat at the Table continues to unfold, it’s very likely we’ll see more of Yiadom-Boakye’s mark.