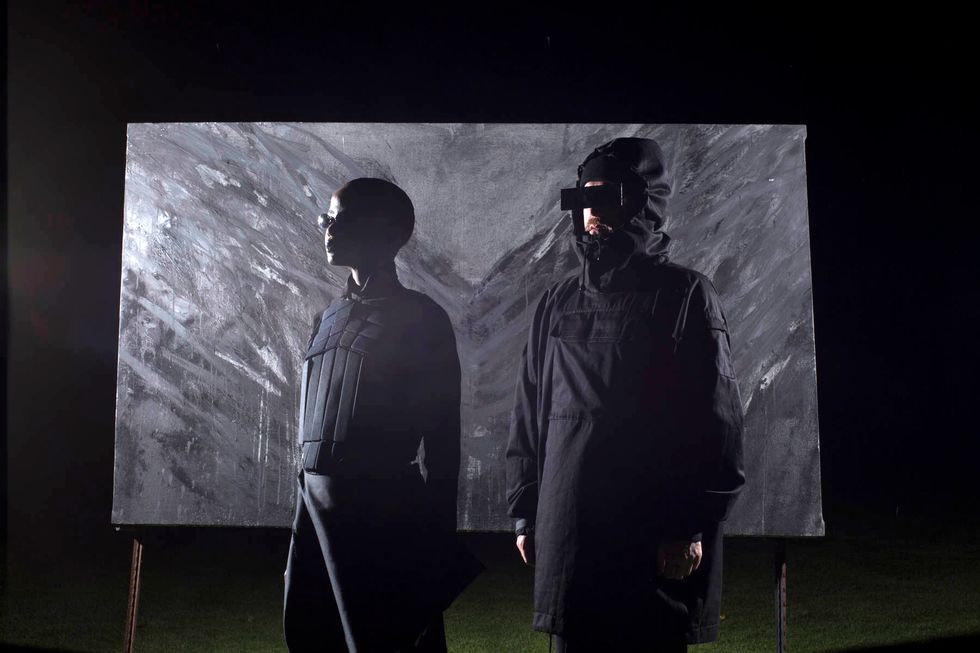 Their output goes far beyond music, including a new residency in Nirox Sculpture Park at the Cradle Of Humankind, located outside Johannesburg; a short film featuring a crisp array of changing colors and scenery; and a multimedia installation in London that includes a lighting system designed specifically for it. Each manifestation includes paintings by Jonathan Freemantle, music from the album, and dancing—both previously recorded and performed live—all of which is altered a bit each time.

Every piece is developed in tandem. They repurpose the choreography, video, singing, and production as they go, using a sketch of a game plan and chunks of previously finished material, and improvise from there. This method is a deeply rooted aspect of all their work together. "That's kind of a guiding principle for us," explains Okzharp, also known as Gervase Gordon. "We like to be prepared, but in the moment you have to trust your intuition to go off plan and improvise. That's how you get the best results in everything." The music wasn't even finished when they started the film, and they worked with demos for the album. "We had to choose which songs we would use in the film and hoped that Hyperdub liked them as well," laughs Okzharp. "Luckily everything in the film made it onto the album."

The collaboration between the three started with a short film called Ghost Diamond. Saunders had brought Okzharp on to do music for the film, and then they brought Ribane on as a dancer. Saunders wanted to go through a list of dancers and Ribane was the first he had mentioned. "I wasn't aware of her beforehand, but I was like we don't need a list, let's just approach her," Okzharp recalls of her immediate impact. Pretty soon after the film they released their first EP together and started touring with Saunders doing live video. "The beginning seed for this project was a film and the music came out of that," says Ribane. "It shows the different mediums that we want to explore."

Chris Saunders is a South African photographer and filmmaker who often works with local dancers and released a book on a style called pantsula. Okzharp has family in South Africa but was raised in the UK and was previously a part of the British electronic dance music group LV. As he got older and started making friends beyond his family, he started traveling to Africa more frequently, engaging with the music there. Ribane grew up in Soweto, a township of Johannesburg, and has been creating all her life. She first performed for Nelson Mandela at 8 years old, toured with Die Antwoord as a backup dancer a few ago, and recently created outfits for Black Panther.

While Ghost Diamond was very focused on Johannesburg, using the city as a character in itself, Closer Apart and the accompanying projects are somewhat region-less. Ribane performs in a collection of settings, with themes based on color, her makeup and outfits matching each space. They range from natural scenery, to undefinable built environments, with the paintings making stealthy appearances in the background. Musically, the project is even more slippery, primarily concerned with vibe and emotion over genre or location. "Music is a global language, it's within the experience of listening to the music and how you define that moment," explains Ribane. "For me, it's just connecting with different borders of the world, not just South Africa or the UK. It's beyond us, beyond the world even."