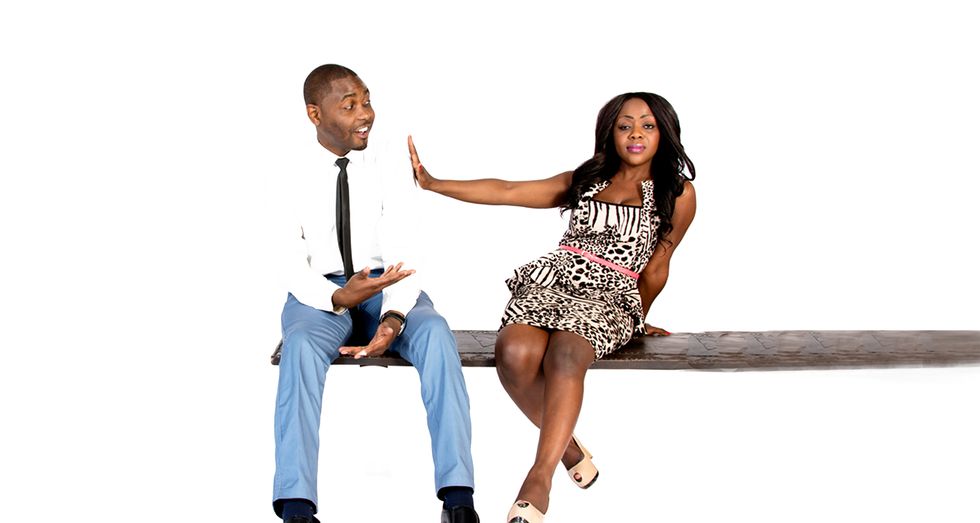 'Hope and Chi' have spent eight stormy years on air as the megaphone for Zambia's voiceless.

Hope Chishala and Chi Msimuko have, at times, been followed home, threatened and questioned by shadowy figures. For a time their studio was being raided regularly by the police. Typical for opposition figures in many parts of the world, perhaps, but arrest and harassment were never career goals for these two passionate Zambian creatives. They are not anarchists or even activists, really—they’re the hosts of the Red Hot Breakfast show on Hot FM, one of the most popular live radio programmes in Lusaka, Zambia.

This week Zambia will elect a new president, just over a year after current president Edgar Lungu came to power following the death of his predecessor Michael Sata. This will be an important moment for the radio hosts whose goal has been to use their voice as a megaphone to amplify the voice of those who would otherwise remain unheard.

In every episode, since it started eight years ago, Chishala and Msimuko have challenged the Zambian political culture in a sardonic and humorous manner that has captivated Zambians and given them a platform to speak directly to the people governing the country. People who are often hard to reach.

As their star has risen, the sound of Msimuko and Chishala’s megaphone has started to drown out the threats. The powerful must now take them seriously. With over a million listeners tuned in every day—in a country of around of 14 million—“Hope and Chi” as they’re known by their listeners are known for asking the tough questions. They often call out politicians on their failures and will always poke fun at them.

This has, unsurprisingly, earned them a few disgruntled fans. While their real fans have sworn allegiance to their satirical political party Kawalala (meaning ‘thief’ in native Nyanja)—with Msimuko as president and Chishala as his unconfirmed veep—the disgruntled ones have threatened them with incarceration, with little success. During the 2011 election cycle Msimuko was accused by partisans of paying people to call in to the show to speak against the ruling government which he denies. He was threatened with arrest. Another time Chishala was forced off the show when a group of police came on the show and demanded that it be shut down because she was "speaking against the government.” Despite many attempts, this week will mark the pairs’ fourth conviction-free Zambian Election cycle.

Photo by Tahilla Photography and courtesy of Chi and Hope

“Politicians have to understand that we speak for the people and it’s rooted deep in the truth. Some people like us, some people hate us but I believe in telling the truth so that is what we will keep doing,” Chishala tells Okayafrica.

Zambia has had quite an eventful few years, in terms of politics, with two presidents dying and three leadership changes in about eight years. It’s been hard to keep track of. During each election cycle, the duo will line up political aspirants, including presidential candidates and grill them on why the people of Zambia should trust them with their country.

This year, the contest has been quite heated with political violence breaking out on more than one occasion, usually with the ruling party and main opposition throwing verbal and physical blows at each other. Some have even lost their lives. It’s been one of the most turbulent election periods in a country that is known for its peace. Chishala and Msimuko will use their platform to share events in the lead-up to the poll.

“I must say when I think back it was always a deliberate plan to create a platform for this. I can’t say the threats were also welcome but I was never going to back down. It was about making people understand that you can channel your voice for good and we have done that,” Msimuko explains. For him, radio is a powerful tool that can be used for positive influence to shape how people understand their political and social context and he wants to be at the forefront of this change.

Chishala and Msimuko’s relationship has also strengthened over the years. Chishala, who started at the Red Hot Breakfast Show, felt that the show could be made stronger by an additional host. She hadn’t anticipated that this addition would come in the form of Msimuko barging into the studio. He plonked himself in front of the mic and just started to talk, live on air. Irritated, Chishala asked him who he thought he was, in turn he asked who she was and that was the beginning of the talking duo who, in between their on-air battles, have created a warm on-air chemistry.

In this election cycle the threatening calls are less frequent, the police visits almost non-existent, but their speech has not been tempered and the questions still burn like hot embers. The duo have proved that free speech and free press, if insisted on, can be attained and maintained.

Samba Yonga is the founder of Zambian based Ku-Atenga Media that creates bespoke communication platforms focussed on Africa. Her work spans the globe but her heart is set on producing content for Africa. Follow her on Twitter, @Kuwaha on Instagram, @sambayonga and check her new podcast, I expand=1]Stand For Peace.