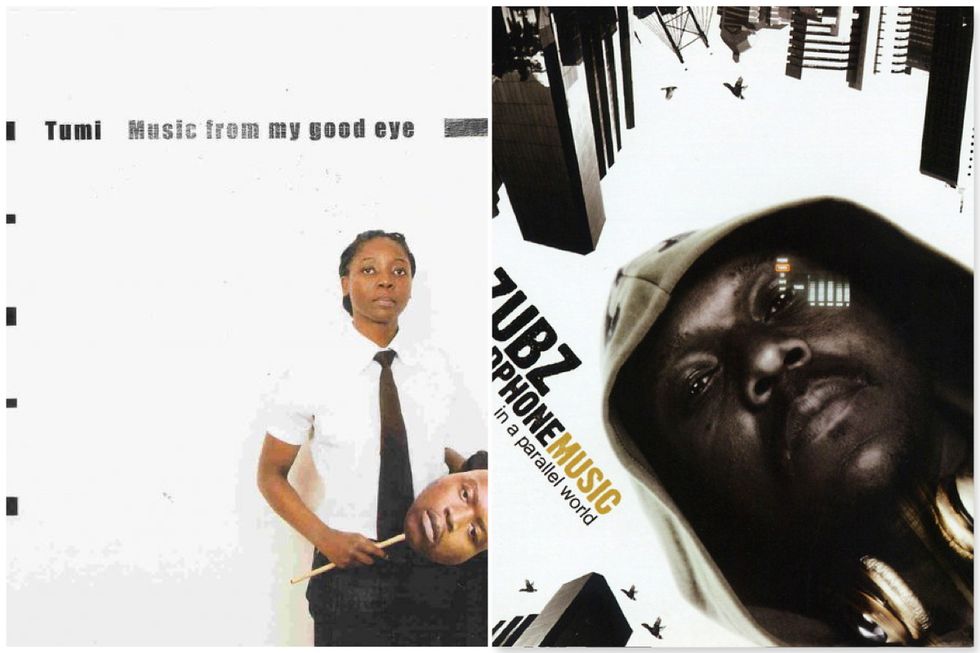 Zubz' "Victory" and Tumi's "Music From My Good Eye" both had the same beat by Mizi.

In 2006, revered South African lyricistsZubz andTumi (now known as Stogie T) released the albums Headphone Music in a Parallel World and Music From My Good Eye. On both albums, the opening songs ("Victory" by Zubz and "Music From My Good Eye" by Tumi and Fifi The RaiBlaster), both rappers used the same beat from Pretoria producer Mizi, who also produced most of Headphone Music.

It's been known for a long time that both Zubz and Tumi had no idea they were given the same beat until they had recorded the songs. They only went back to shout each other's names after hearing the songs.

Mizi recently shared how he got to give both MCs the same instrumental in a must-listen interview on Massiv Metro. Instro, another veteran SA hip-hop producer, invited his counterparts to his show Producers Paradise. "I know that Zubz used some live instruments, but essentially it's the same beat," said Instro about the instrumental.

"So I'd played [Zubz], let's say, 50 different beats, and he didn't seem to be keen on that specific one out of that whole batch," Mizi explained during the interview. "So, I knew that out of the beats that I had given to him, some were free. At the same time, I got introduced to Tumi by Nyambz who also wanted beats. So, I took the surplus beats from what I had given to Zubz, and a few others. So, it was a whole new batch, but it included some of what I thought was rejected. So, I give it to Tumi. Tumi listened to the track, the first time, he was excited about it, but then the second time, he was like, 'I'm excluding this one.' Neither artist seemed to feel the beat. Tumi, in the last session I had at Motif [studios], he said, 'Na, I'm not using that beat.' I said, 'Zubz also got it and he said, "I'm not sure about it."'"

"I didn't know of any of them would use it. The albums came out at the same time, it could have been the same week. And both artists released that one [song], not as the lead single, but the first song they put out just to test the water.

"The first releases from both albums happened on the same week, so it's quite surreal to hear on radio, the Tumi version and the Zubz version. They are slightly different, but it's fundamentally the same beat. I think they had both forgotten that they had initially rejected the beat at some point, so the question from both of them was, 'Why did you give the beat to this dude?'"

In retrospect, Mizi has no regrets, as he feels the beat was part of 90s' hip-hop and R&B culture. "For me," he said, "it just reminded me of the 90s, where beats would be given to both a rapper and an R&B singer. Like that "MCs Act Like They Don't Know" beat, [it was given to both] Monifah and KRS-ONE. It also leans to more the reggae culture—the riddims."

Nyambz on Making Music In This Era

Earlier on in the interview, Nyambz, who was a mainstay in the mid-2000s era of SA hip-hop, expressed how it would be difficult and actually pointless to make the same beats he did back then in this current era.

"There's a certain thing about creating art in a period of time, that I think is specific to that period and the people that are receiving it. It's very hard to replicate the same thing in a different era."

Instro asked, "So you are saying the time for that is done?"

"Yeah, I think it has a certain place in nostalgia, unless it connects with the new era. I think it's very difficult to redo… I think you'd have to create a new sound altogether that maybe embodies the same character as the old one, but it would have to be new, I don't think you can replicate it. And I think, as people, you also evolve, you never wanna be the same person; how you were at 15 is not how you are at 25, and it's not how you are at 35. Even with rappers, I wouldn't really expect a rapper to rap the way they did at 16. Your life is different, your experiences are different. So, I don't know. We will be releasing more material. So that's the fear now, because when you have a gap between releases, people have a memory of what you used to do. So, something new that's not that, there may be a bit of a disconnect."

Mizi, Nyambz and Instro are all very important names who contributed to hip-hop before it was the pop music of the day in South Africa. Nyambz has produced some of the most iconic hip-hop songs to ever come out of the country: "Microphone Sweet Home" by ProVerb, "Let's Wait a While" by Pro(Kid), "Once Upon a Time in Africa Remix" by Sifiso Sudan and Tumi, "Gangsta" by Zubz and Tumi, "Get Out" by Zubz, and a whole lot.

Mizi produced most of The Anvils' Independence Day mixtape, most of Headphone Music in a Parallel World by Zubz, "Go Away" by Teargas, among many others.

Instro's NASA (Now and Still After) mixtape is a cult classic, which the producer crafted in its entirety. He has also been working with Reason—he has produced on all of his albums from The REASONing toAzania.

Nyambz and Mizi have an album coming out soon, in which they work with Zubz. The project, titled Last Letta To Nina, will see Zubz rap over beats that all contain Nina Simone samples, courtesy of Nyambz and Mizi. The project was first announced in 2015, but according to Nyambz, it will finally come out this year.

Listen to the whole conversation between the three icons below and revisit our interview with Zubz and Nyambz about the upcoming project, here: