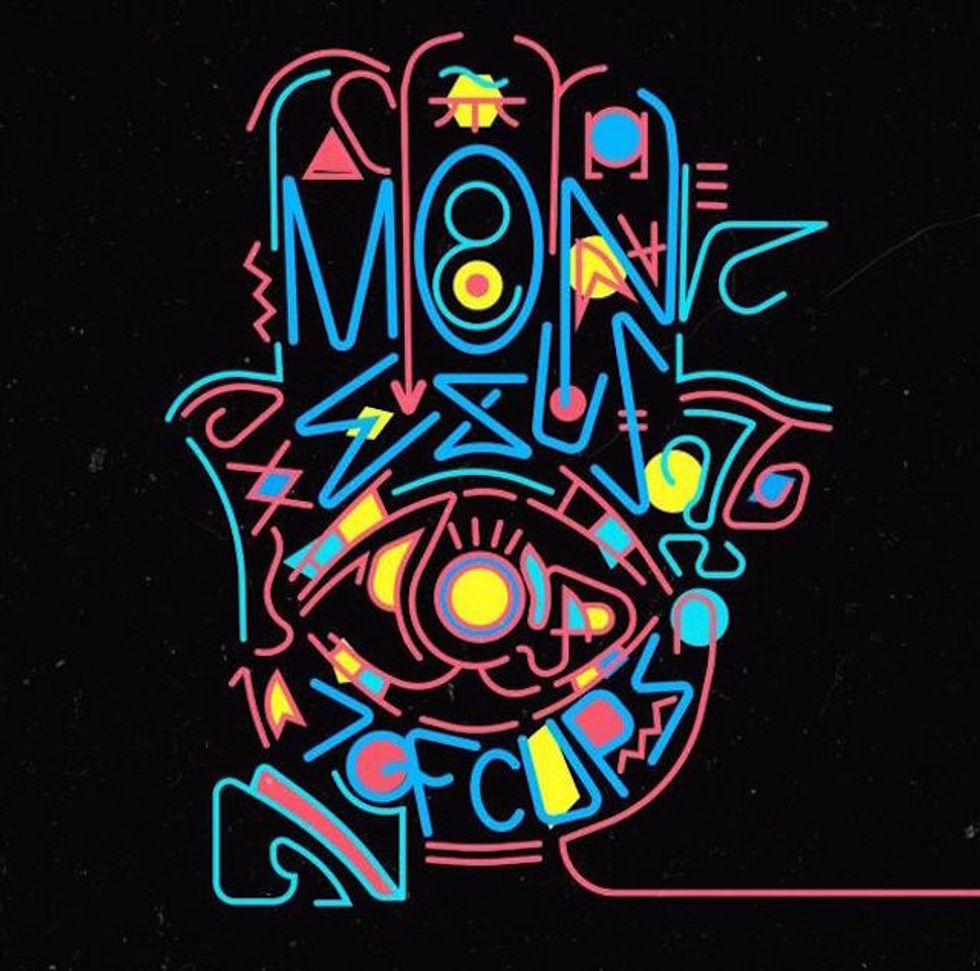 Born in Botswana and based in Johannesburg, electronic producer Monexus is breathing new air into the South African beat scene with his impressive debut full-length 7 Of Cups. The expansive 26-track album bears some similarities to the producer's recorded output over the last five years — which includes seven beat tapes and three EPs — but in many ways 7 Of Cups is set apart by its ambitious stride. The record moves in phases, maintaining no singular aesthetic or theme. Instead, the LP is marked by a confounding miscellany of unconventional genres and textures, from the curb-stomping ghetto grime of "Be Real" to the serene and celestial synth workouts of "Saturn Returns." These disparate and largely instrumental productions work to synthesize Monexus' vision of South Africa: the people he's met, the places he's recorded at, the venues he's performed in, and the wild array of sounds he's encountered along the way. We recently chatted with Monexus, born Moemedi Poncana, about 7 Of Cups and how he got to where he is now.

At what point did you transition from rapping to producing?

Monexus: Since I was 10 I was on my grandpop's Yamaha keyboard, coercing friends to jump on choruses I’d written over an entry level dynamic mic my dad had bought me. I would overdub vocals using a small Philips boom box and a Kenwood Hifi system. I got into rapping in high school when some friends and I came together to form the rap group Nexus. Around that time I took part in a rap battle and although my rapping didn’t get much love, due to a technical glitch, all the participants ended up using beats I had created with friends from another school. After the battle, I got daps and praise for the beats. At the time it just made more sense to me to focus on beatmaking. Composing has always come more natural to me than songwriting/rapping.

How long have you lived in Johannesburg?

M: For around 3 years now. Before that I was based in Pretoria for a hot minute, 7 years.

Tell us about the relationship between 7 of Cups and the South African beat scene. Is the music you make defined at all by where you live or where you come from?

M: The South African beat scene is hella hella diverse and the quality is really good these days. A similarity, as well as a huge inspiration, for the project was just that. I endeavoured to channel the past 3 years of my life experiences to create a project which is as meandering as everything has been to get to this point. When I got to Joburg, I literally only had my bedroom studio packed and stuffed into my single-cab Rav4. I got through the first few months crashing on fellow producer buddys’ couches. Having a laptop to stay creating as well as to archive until the right time was a great blessing, as these experiences and creations along the way contributed immensely to 7 Of Cups. Being 7 years in Pretoria, the underground scene there influenced my sound tremendously. The laid back yet enlightened views a lot of the people I met and chose to surround myself with have also helped me develop my sound in such a way that I completely let the music move me, and not necessarily what the charts said was hot.

What's the meaning, if any, behind your new project's title? Is there any connection to its tarot card symbolism?

M: Definitely there’s a connection. I felt that after 3 years of reinterpreting a lot of things, especially music and my relationship to Her, I had lot of different crazy ideas everywhere — loops, chord progressions, sample chops. Listening [to the ideas in their] disorganized state, [they] didn’t make sense to most people. After an epiphany which occurred while making a beat (the title track: "7 Of Cups"), I started going through all the material from a different perspective and I managed to synthesize, filter out and compress about 480 project files into the 26 track project 7 Of Cups. Before the epiphany, I was getting frustrated at the unlimited options I had (terabytes of new sounds and VSTs). I took back creative control, and completely relaxed.

Did your approach to recording this first LP change in any way from how you've worked in the past?

M: All of my prior projects were done from beginning to end in apartment/bedroom studios as a law student. Putting together a beat tape release in such a setting was simple enough and on average I got into a 2-3 month routine for each release. 7 Of Cups is a journey, as long and tedious with peaks and crevices akin to summer sunny road trips with the windows down and the breeze blowing. When I listen to it, I have flashbacks of the different places I was at, fiddling with my laptop, creating the initial compositions. From a bungalow along the Hartebeesepoort Dam to a double-story professional world class studio in Johannesburg, and lots of other places in between.

What are some of your favorite samples used on 7 of Cups?

I love them all! But Wee Gee's "Let Me Lay With You," the sample on Track 16, "Lay U" has to be my favourite! I fell in love with that joint when I first heard it on vinyl.

Do you remember the first time you heard a J Dilla beat? What were you doing and what was your reaction?

I heard a lot of Jay Dee growing up as a kid through my uncle and loved it before I even knew it was Jay Dee on the beat. An example I only discovered was Jay Dee after the fact was "Didn’t Cha Know" on [Erykah Badu's] Mama's Gun… it sent chills straight down my spine first hearing it! The sonic quality and the placement of the percussion over the groove! Priceless.

Who are some producers making music right now that you respect?

Monexus' '7 Of Cups' is available now on iTunes and Amazon.