Moonchild And Maramza Team Up On 'Inkwenkwezi' + Interview 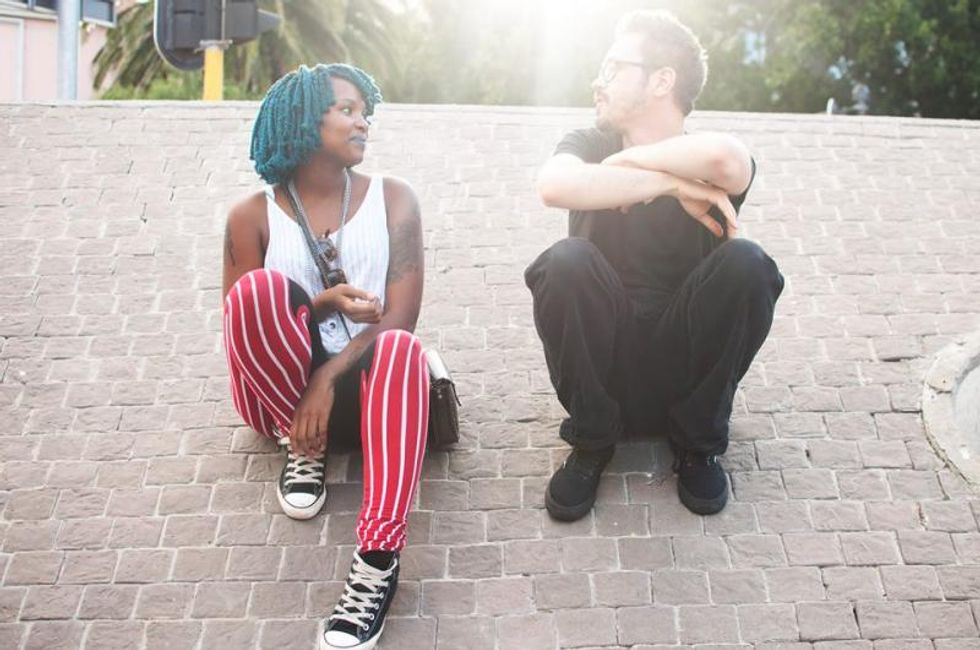 We first spotted blue-haired beauty Moonchild a year ago when she and BLK JKS drummer Tshepang “Rambo” Ramoba released the vocal finesse showcasing "Rabubi." Today, as singer and fashion designer, Moonchild has grabbed South Africa's creative scene with both hands and aims to maintain a lengthy stay as a woman of substance in the industry. Her dark, ethereal teaser collab "Inkwenkwezi" with Richard Rumney’s beatmaking alter-alter-ego Maramza is just a sneak peek into what her debut full-length holds in store. We caught up with the Moonchild and Maramza ahead of what promises to be a huge year for both halves of the collaboration. Listen to "Inkwenkwezi" below and scroll on to find out what the pair had to say about Jozi C.R.E.A.M. mentality, women in SA music, the multiple faces of Richard Rumney and more.

Sanelly: I'm originally from Port Elizabeth. I matriculated there then moved to Durban to further my studies; thats where I started performing solidly.

OKA: When did the move to Jozi happen and how do the scenes differ for you as a creative?

Sanelly (Moonchild): I'm not particularly in the know when it comes to my hometown scene. I was exposed to mainly hip hop growing up because we had a studio at home and my brother was a hip hop producer. I’ve been in JHB for two years now and the scene is very different. In JHB people are territorial... in Durban people work together and are more open. Durban has the most amazing artists, but what it lacks is the business. There, artists are driven by love, in JHB they’re driven by money.

OKA: Is it such a bad thing to be driven by money, especially when we all need it to live and create? If there’s one thing stopping people from creating what they really want, it is lack of money, isn’t it?

Richard (Maramza): Hmmm, I think there is some truth in the notion that people in Joburg are focused more on the profitability of their craft rather than the art. I feel like it's a stressful place and there is this feeling that if you don't have enough money to provide for and protect yourself then you're fucked, so people take less creative risks, because creative risks normally lead to poverty. Also Joburg is the City of Gold– Cash Rules Everything Around Me, C.R.E.A.M. Get The Money. People show their success with material wealth– cars, clothes and special dranks ;) (disclaimer: this is a generalization of Joburg. I still love the place because of all the dope shit that goes down that isn't what I mentioned above. But there is truth to any generalizations) I'm an iKapa cat now, and although I feel less pressure to be financially successful down here, it's still a big part of how people get by. The Cape Town dream is a lie!

OKA: There seem to be fewer female-fronted outfits as opposed to male-fronted outifts that are doing interesting things in South Africa at this stage. As a woman, and even as a mother, do you feel that you have a certain responsibility to your audience? What is it that the music scene needs in your opinion?

Sanelly: I feel as a performer one generally does have a responsibility to their audience. Mine is to raise awareness. I’m about empowering women. I want to raise awareness on issues like eating disorders… mainly because as a society we take those issues very lightly. In this industry where women tend to become objects, we as women need to have something super solid for anyone to take us seriously. We as females tend to think we need to sleep our way into getting things, meanwhile hard work helps... Yes, you don't get there any faster but you’ll last longer, especially knowing how hard it was to get there in the first place. We need to value ourselves and believe!

OKA: Tell us a little about Moonchild Cultwear. Are you first a designer and secondly a singer, or do they come from the same place? What inspired your look?

Sanelly: Moonchild Cultwear is my fashion label; how the name “Cultwear” came about was from me wanting to be so influential that I'd have a "cultural" following, in fact… a fashion church. My designs have been described as whimsical with a touch of dark, quite eclectic, almost voodoo doll will more doll than voodoo! (laughs) I'm more into high fashion though. People are more open to the brand now than they were before. Now they’re inspired by being different, and Moonchild Cultwear sells uniqueness. Fashion and music come from the same place. I studied fashion to mold and shape me; no one can teach you creativity. I'm inspired by emotions, by colours, by effect...

OKA: Let’s talk about your upcoming album. You’ve worked alongside many other powerhouses already, such as the gorgeous Thandiswa Mazwai. What can we expect musically?

Sanelly: Expect fun. I'm a writer so I try and raise awareness in a light form. In this album I'll get you singing along without caring what you’re saying, but when you actually listen, you’ll hear I'm a very serious topic tackler... I just package it in the sweetest wrapper. People don't want serious in a suit... hence, play with it! I’ve mostly worked with Matthew Fink on mastering and my big brother Tshepang Ramoba (BLK JKS drummer); he gets me in ways that are inexplicable. He has been so amazing. Working with him is dope and also being able to pull out the little sister card is awesome. I just shot a video with Justin McGee and Roger Young for one of the tracks called "Starring," a song that is basically about James Bond becoming an alcoholic and not able to serve his purpose because he is worried about his martini being shaken not stirred, just like our justice system's uselesness! Roger (who has always existed in my music life) heard it at my Rocking the Daisies performance last year and wanted to do the video, so we did. It's coming out in mid February. So excited!

(From the upcoming "Starring" video)

Richard: In terms of Moonchild and Maramza it will likely be more single online releases than the traditional album format. Soundcloud, iTunes, Beatport, etc. That's my ish!

Sanelly: Working with Richard has been an experience, he managed to bring the soul side out without it sounding cliched. We haven't done a lot together but I love how he has a way of getting me to be more emotional. His sound has a way of doing that to me. It does things, good things. He tapped into my emotions… I love it, and I love his work… That guy is amazing. I have this song as my ringtone, I sleep to it, I wake to it. I can't get over it!

OKA: Richard, clue us up on where you are musically. You’ve done a lot for Red Bull in South Africa, you’ve been through all sorts of endeavors and seen a lot of different music...

Richard: For years I've worked in SA music, originally as a hip-hop producer, then as an electro DJ guy, then as a future kwaito guy (as a very basic overview) and Maramza sums that all up. Maramza is actually just the continuation of where I left off with Richard the Third back in 2012. The reason I moved onto that name, is because I felt "Richard the Third" really doesn't fit the current vibe I'm into, it made sense when making trill hip-hop and playing indie-dance, but I needed something fresh and Maramza was a nickname I had earned in Studio, a play on my surname, and so I adopted it. It also gave me an opportunity to play around with a persona online. So I started Maramza as some guy on Facebook making facetious remarks and that has kind of stayed the same. It's dope to sort of adopt a persona, in the case of Maramza a daft, simple, money-lovin, wannabe DJ and inject that into the music in some way. I'm still regularly Maramza on FB, and he's always really harmless in the things he says and claims to do, it's clownery if anything. Although now my cover is well and truly blown!

OKA: How did this collab come about and what is it about Moonchild as a performer that peaked your interest?

Richard: Her name has been causing a bit of a buzz and I saw her improv on a beat at Great Dane while I was playing there during Red Bull Bass Camp and I could see what the fuss was about– a really beautiful voice with amazing range and a kind of tripped out, yet solid soulful vibe. Moonchild– Keeping It (Ethe)Real, know what I mean? Also personally I could see we would get on. I'm a weird guy, she's got a strange thing going on, so it turned out we could really hang out. She asked me to send her tracks, I did, she connected with some of them, and while I was in Jozi, we recorded in my brother's (the artist Twelv) small studio and we now have "Inkwenkwezi."

OKA: Why Inkwenkwezi as the first single, and what is this “search for stars” that inspired the song?

Richard: That's just what was finished first, and we both really liked how it sounded, so we put it up on Soundcloud. As Moonchild explains it, when you're in the city, you struggle to see the stars in the night sky; much like how these days there are no real stars– as in personalities and role-models. You keep searching for them but you just can't really see them...

Moonchild's debut LP is due out later this year.