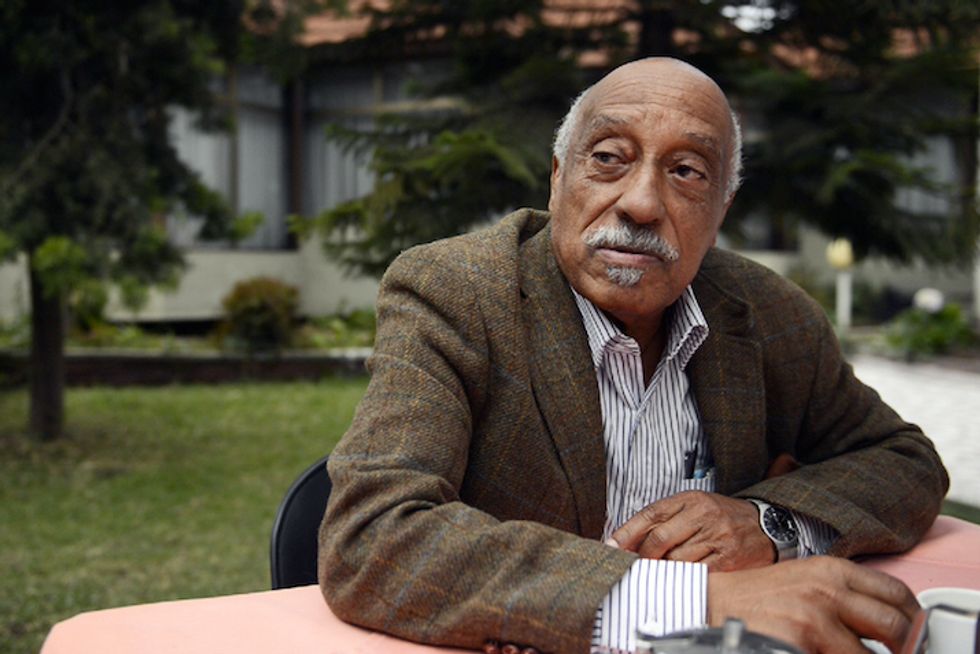 We talk to Ethio-jazz inventor Mulatu Astatke about his latest efforts in promoting East African music across the globe.

Age is not a factor for the great Dr. Mulatu Astatke. On any given Saturday, you can catch the 71-year-old Ethio-jazz inventor hopping back and forth from the timbales, congas and, of course, vibraphone with the same tenacity as his younger musical counterparts at his African Jazz Village club in Addis Ababa. This past weekend, we caught up with Dr. Astatke to discuss his latest efforts in promoting East African music and his thoughts on Africa’s influence on the world.

Juan Gomez for Okayafrica: It’s an honor to be here with you. What have you been up lately?

Mulatu Astatke: I’ve been traveling; I’ve been playing all over the world. Always, my base is Addis Ababa, but I travel and go in-and-out of Addis. I’ll be leaving next week to America and I’m meeting different musicians plus with a great promoter in New York. We’re gonna talk about starting this university of Ethio-jazz. I have also written a bit for an opera, which is called Yared opera. It’s based on the Ethiopian Orthodox Church and its contribution for conducting music.

OKA: What’s the project you got going on at your African Jazz Village club in Addis, and why is it so important to you?

We started with Tanzania, [Leo Mkanyia & The Swahili Blues Band] a fantastic group. They [were] here for about one month. It is a beautiful project—the fusion between Ethiopia and Tanzania. I hope this project will go on for a while. Earlier we did a music called the “Ethio-Kenya Fusion” with Eddie and Tabu Studios. It was a very beautiful experience, very nice.

Probably next week we’ll have a group coming from Uganda. Then, we’re working on another group from the Congo to come over, and also Kenya as well. After that, we are planning to get to Senegal and Western Africa. As soon as we just put the Eastern Africa together and see how it works, and see how it promotes East African music and art… we will try to get them from Senegal to come over. And I hope that in the future, we all somehow get together and develop our own music. We want African music to come out from Africa instead of coming from outside to us.

OKA: As we approach the 50th anniversary of Ethio-jazz, and the release of your A'fro-Latin Soul' LPs, what were some of your influences when you were in New York creating the sound?

MA: As you know, all these rhythms we’re talking about were born in Africa. And I’m an African. You have to listen to the combination of this music. We have five notes and four different modals in Ethiopia. That’s what I have used. The [latin] rhythm is one part of that combination of Ethio-jazz. And there is one part, [the latin rhythm] you’re talking about, you find this rhythm in the southern part of Ethiopia. You find mambo, you find 'cha-cha-cha,' and you find the basics of bossa nova. Everything here you find. Our contributions. What we’ve done.

Ebo Taylor and Gyedu-Blay Ambolley in Ghana have made similar claims about funk rhythms and the music of their Northern tribes. They point out how the Northern Fra Fra tribe has rhythms that are strikingly similar to funk. They claim James Brown was a Fra Fra man.

MA: That’s what’s talking about! You see Michael Jackson’s moonwalk? That’s a Tigrigna dance. The thing is, Africa has contributed so much. The bush people, those are the people who created musical instruments, different scales, different dances, different hairstyles… different artistic things, which the whole world is using now. You can see it in Southern Ethiopia. There are two types of diminishes scales that Charlie Parker used to create modern jazz. These tribes in the South use one of those diminishing scales. That’s why Ethio-jazz has respect all over the world. Because it’s basically all of these kinds of things put together. We’re talking about world music. We’ve been doing this since a long time ago.

Juan Gomez is a photojournalist, deejay, and researcher of African music currently based out of Oakland, California. He curates the music blog Digging 4 Gold and is a co-founder of the annual Umoja African Festival in California. You can download his Sound of Africa mix series here.