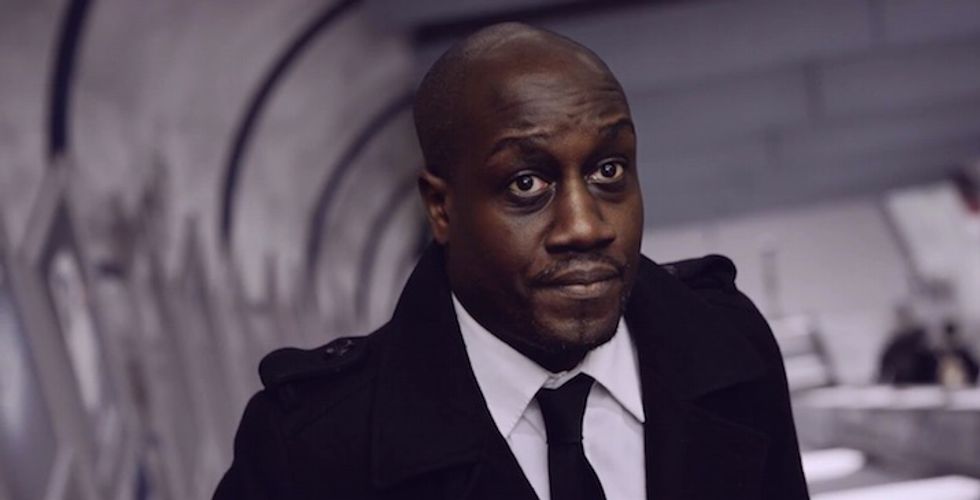 British-Ugandan poet, journalist and musician Musa Okwonga premieres the video for "Ring The Bells," off his forthcoming 'The Nomadic' EP.

British-Ugandan poet, journalist and musician Musa Okwonga offers a thoughtful tale of adventure and transition on his new EP, The Nomadic (due out July 14). The 4-track project, produced by UK-based multi-instrumentalist Greg Surmacz (of the British bass outfit Paper Tiger), documents Okwonga's departure from his hometown of London to Berlin, a move that brought about conflicting emotions for the multitalented artist. "I was in plenty of pain when I left London, a city that I thought I would never part with," he explains in a press release. "Yet, at the same time, I was growing excited about my new life, and I think that this contradiction is present throughout this record."

The Nomadic also reflects on the experience of Okwonga's parents, who migrated to Great Britain from Uganda in the 1970s. Their story provides the inspiration for the album's title. According to Okwonga, "My parents had broken free from the country of their birth too – from Uganda, some thirty years before. They had been nomadic once, forced into that state of brutal war, and I think that I inherited that sense of displacement from them. I have moved through many worlds where I have never truly seemed to fit, and so that's why, in the end, I think I chose Berlin: a city welcoming so many who have always felt gloriously, triumphantly, out of place."

Today, we're excited to premiere the video for the EP's next single, an infectiously reassuring track that reminds listeners to follow their course and "ring the bells, settle for nothing else." Shot in Helsinki, the Serdar Ferit-directed clip takes place primarily in the city's polished, railway, where Okwonga can be seen delivering his rhythmic spoken-wordplay as fellow passengers bounce along. Watch as the artist continues on his life-affirming journey in the video for "Ring The Bells," and read on for our full Q&A with the accomplished writer and musician.

Okayafrica: What inspired you to write "Ring The Bells"?

Musa Okwonga: The short answer: the train journey from London to Leeds. The long answer: my entire summer. I actually received the beat for “Ring The Bells” on the morning that I was due to catch the train to Greg’s [Surmacz] house and record the EP, and, having played it a couple of times, I thought, “wait, now what’s this?” It sounded like the perfect accompaniment to a journey, the soundtrack to a voyage, which is what my summer and indeed the previous two years of my life had been. I had travelled to Sweden, to Germany, to Slovakia and Abu Dhabi; I had just returned from covering the World Cup in Brazil; and I was just about to move away from the UK. My life has always been characterised, it seems, by taking sudden, dramatic leaps into the unknown, and it seemed as if my train was about to leave the station once more. And so that’s why I came up with the opening line, just as we pulled out of King’s Cross: “back again for more of the same, all aboard the train”.

OKA: What story did you want to tell with the video?

MO: The story is all thanks to Serdar Ferit, who directed the video and came up with its vision. He immediately thought that we should use a train, but then treat that as the starting-point for travel into the unknown; and so that’s why you see my character surrounded by fellow commuters and then venturing further and further from his comfort zone, out past the reaches of the city, into an icy, rugged countryside. In the video, my character, tieless, strides off towards a glorious uncertainty, which is pretty much what I did when I left my job as a lawyer to be a poet ten years ago. I had absolutely no idea what was going to happen: I was terrified, but I went ahead with it anyway.

OKA: Where did you shoot the "Ring The Bells" video? Why did you pick that location?

MO: We shot the video in Helsinki, which is where Serdar lives with his wife Paulina Tervo (with whom he runs a multimedia production company, Write This Down Films. At first we considered filming it in Berlin, but then quickly decided that Berlin was not “other” enough, it would be already too familiar to many viewers. Helsinki, though, and Finland more generally, has more of the spirit of the frontier that we were looking for: it has wilderness very close to the city’s borders, and it is the edge of Europe, the beginning of a seemingly endless North. So, it was perfect.

OKA: What was the process like securing the train car(s) for the shoot?

MO: Serdar did an amazing job with that. He contacted the city authorities some time in advance and they gave him permission to film within a certain period of time - just after rush hour until the evening, I think it was. And they didn’t charge us anything, either. They are far more relaxed about filming on public transport than they are in London, that’s for sure.

OKA: What were you listening to at the time that you wrote The Nomadic?

MO: I have actually passed this question to the EP’s producer, Greg Surmacz - I listen to a great deal of music, and at the time that I wrote the EP I had been listening to Amon Tobin, Seu Jorge and Nas, but Greg had a very particular approach to the EP. I have copied his words below:

"My listening habits are really varied, but I wanted to write music that I felt would complement Musa's specific vocal style rather than emulate anything in particular. What we do with Paper Tiger is often quite rhythmically complex with lots of high-end synths and melody - this music needed to be more reflective and sombre, but still maintain that sense of groove and vibrance. We had a lot of discussion about reference points while I was making the original demos, but the unifying characteristics were more about feel than particular artists: electronic music with warmth, texture, space and humanity. I made a lot of rough sketches to begin with, but it was a collaborative process to end up with these final tracks - Musa's vocals and ideas really helped to give the project a coherent sound, which I think has given us a pretty unique end result."

OKA: Could you tell us more about your parents' escape from Uganda?

MO: My parents were both medical students - my mum went to Manchester and became a GP, and my dad went to Cardiff and became a surgeon -  but they met during their evacuation in Uganda, where a couple of Scottish doctors helped them to secure safe passage from the country. This was in 1972, during the intensely murderous reign of Idi Amin, at a time when boys and girls were being dragged out from their dormitories, never to be seen again. The couple who saved them were Professor Sir Ian MacAdam and his wife Lady Pamela: MacAdam, the head of the department of surgery at Uganda’s Mulago Hospital, was later expelled from Uganda for infecting Uganda’s citizens with “political gonorrhoea”. However, he would be buried in Uganda after his death. Macadam and his wife saved my parents’ lives, and so, indirectly, they saved mine.

The Nomadic EP is due out on July 14. For more, listen to "And So I'm Here," which premiered last week on Complex.