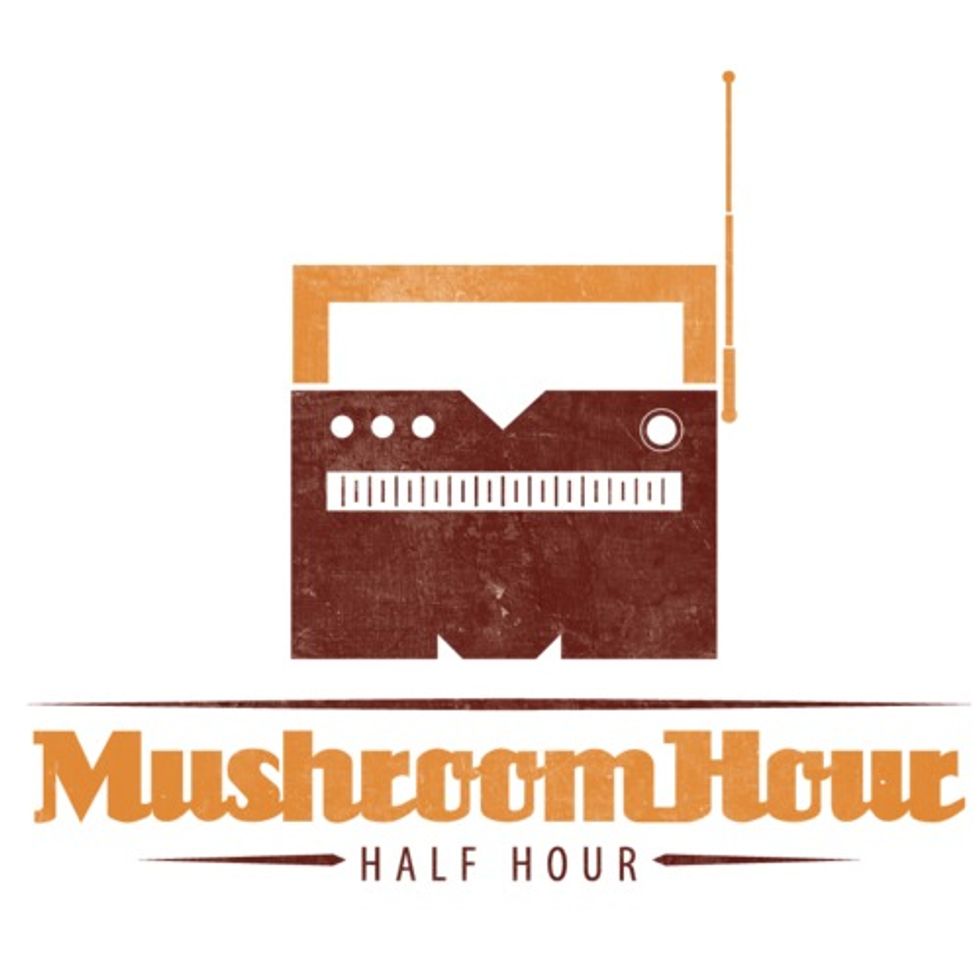 When three Johannesburg-based crate digging friends decided to take a roadtrip to visit the legendary poet Lesego Rampolokeng, their love of 70s soul instrumentals and spoken word saw the birth of Mushroom Hour Half-Hour, a new podcast/videocast in which “a few hours of unrestricted fun” are dedicated to playing from their very own vinyl collections, joined by fellow Joburg-based emcees rhyming over South African funk and soul classics. The Mushroom Hour Half-Hour forms part of a collective of artists called Mind Your Head, a group of musicians, filmmakers and photographers who share a passion for archiving South Africa’s arts and culture. In their latest jam they feature a lesser known, but terribly important voice in South African wordsmith history, Mboneni “Bra Ike“ Muila. We chat to two members of the trio, Nhlanhla and Andrew, to get the story behind the half hour. Listen to the "Scamtho Shrooms" session featuring Bra Ike below and scroll on for the full Q&A.

Shiba for OKA: Tell us more about Mushroom Hour Half-Hour, and fusing technology with things that work “on the ground.” How did this whole thing start?

Mushroom Hour Half-Hour: Last year we took a road trip and visited legendary poet, author and playwright Lesego Rampolokeng, at his then home in Zeerust in the North West Province of South Africa, with the aim of recording a podcast in a more curated manner. We took our decks, a couple of microphones, a zoom recorder and some vinyl that we thought would complement his character, lyrical content and style of delivery. The podcast we recorded that weekend was a deeply personal and beautiful thing for us and ultimately led us in a new direction. "Scamtho Shrooms" is the second installment in this new format, where we visit important South African poets and/or musicians at a space of their choice and record a curated show with them. Along with the resultant podcasts, we now film the shows and also broadcast them live on a ‘pirate’ radio frequency with a limited range, meaning people in the area in which we are doing the show can tune in and listen on the radio.

Regarding the fusion of technology with ‘things that work on the ground,’ we came up in the South African hip hop community, and hip hop, in our view, has always been about manipulating current technology to break ground, develop new styles and deliver messages from the ground up. No one imagined the use of 2 turntables for scratching and mixing before Kool Herc and his contemporaries came along. People were sleeping on the Roland TR-808 drum machine before Afrika Bambaataa & Soulsonic Force dropped “Planet Rock” in 1982.

We are in many ways Analog Brothers – we only play vinyl – but it is 2014 and we embrace the technology that allows people on the other side of the world to download and listen to our shows.

OKA: What is it about Bra Ike that you wanted to show us in this segment? How did you come across him? Tell us a bit more about S’camtho.

MHHH: We saw Bra Ike perform early in 2013 and were blown away by his performance. Although he was performing accapella, he delivered his poetry with a flair and poise that we felt was a perfect match for the South African soul ‘45s we had been getting emcees to rap on. So we tracked him down and visited him in the latter half of 2013 at his house in Mofolo, Soweto. That visit led to a number of follow up visits, which in turn led to the recording of the podcast and ultimately a great friendship.

Bra Ike’s poetry is delivered in Isicamtho, which is an urban slang-based lingo that fuses the eleven languages spoken in South Africa. As Allan Kolski Horwitz says in the foreword to Bra Ike’s first published collection of poems, titled Gova: "Ike Mboneni Muila stands out as a South African original – not that he is the first to write in Isicamtho (many others have done so), but that he is the first to build a developed body of work that is entirely in Isicamtho and makes no apology for that."

The form of S’camtho used by Bra Ike is an urban argot no longer widely used and one of a number of such dialects that fall under the South African umbrella term of ‘tsotsitaal’ – loosely translated as ‘gangster speak.’ Although Bra Ike’s style of S’camtho was used in the streets of Soweto as far back as the 1970s, it was borne from ‘Kofifi witty,’ which was initially spoken by the gangsters of Sophiatown - an urban area close to Johannesburg city that was also known as Kofifi and was a cultural hub during the 1940s and 1950s. Although no longer in use, the S’camtho used by Bra Ike was the basis for an ever evolving and dynamic urban slang currently used on the streets throughout the country.

OKA: So what about Bra Ike did we want to show you with this podcast?

MHHH: Apart from his lyrical flair and flow, we wanted to capture the wit inherent in his poetry and in S’camtho. Here is a guy who, in a tale of gastronomy gone wrong – "Inside of Me" – talks of the "home made brews and beers" and the "sponge lungs chicken bean bones / flat tubes atchar" inside his stomach, followed by the profound words "inside of me someone is knocking passionately to no avail." Also, as the Mushroom Hour Half-Hour is a vehicle through which we intend to archive important and rare treasures from our country’s culture, we wanted to showcase Bra Ike - the man, the cultural icon and the artist who kicks poetry with the poise of a pantsula dancer.

OKA: Does Scamtho unify a nation and help create awareness of the different dynamics of South Africa’s social status? Is it aimed at a certain sector of the populace or is to meant for everyone to enjoy as more than a form of entertainment along with the reasons stated above?

MHHH: As the S’camtho spoken by Bra Ike is not widely in use today, we will focus on the urban slang that grew from it, which these days is used throughout the country, whether in urban or rural areas, and is also an amalgamation of various South African languages. As there are many different cultures and ethnic groups in our country, most of which have their own unique mother tongues, this slang is indeed a unifying force for a large majority of our country’s population, as it enables peoples from all these different cultures to communicate through a generally understood street code. It is especially helpful in a city such a Johannesburg, which since the days of the gold rush has been a place where people from different cultures all over the country come to settle and look for work.

That said, the street slang that comes from S’camtho is primarily spoken by the black majority in South Africa and by and large is not a mode of expression used by people who form part of the minority racial groups in our country. So although it is a unifying force for the majority of our population, it is not so in the romantic "Rainbow Nation, everyone is cool and has forgotten about Apartheid" kind of way.

Regarding the second part of your question, it is important to note that these slang dialects – both the S’camtho of old used by Bra Ike and the current day street slang – existed or exist outside the realm of entertainment, although many artists such as Bra Ike do naturally make use them as part of their repertoire.

OKA: How do the words of the older generations influence your work today?

MHHH: With the current format of the Mushroom Hour revolving around our vinyl collections, we are by default heavily influenced by the older generations. This is amplified by the fact that we are now trying to use the Mushroom Hour as vehicle for archiving the work of living legends.

But outside of the Mushroom Hour, we as individuals have always consciously tried to engage with the older generations in different respects, including both their words and their music, whether through literature or as music diggers. Having come from a hip hop background, the tradition of sampling naturally led us to collecting old, second hand vinyl or digging into our parent’s collection, which in itself was an exercise in attempting to bridge a generational gap of sorts. Also, beyond hip hop, our community (which includes artists and musicians of all persuasions and styles) tends to generally appreciate the importance of having a firm grasp on history in order to move forward and innovate.

The older we’ve grown, the experience of the older generations as passed down through their work takes on a richer and perhaps more meaningful quality. It is humbling to think of the standards of excellence they achieved, often with scant resources and technology. "So far ahead we're behind you" ~ Ice Oscillator, Analog Brothers

OKA: Having looked at the leadup to last week’s elections and the state of things right now in South Africa, do you feel that this generation has less of a hunger for story-telling, or just has different ways to tell them?

MHHH: This generation has a different way of expressing itself. Everyone has a different way of telling a story; it’s intrinsic to our human nature. It’s kinda like the analogy of a broken telephone, where the same story changes from person to person according to levels of subjectivity and varying attention to detail.

It does however seem that certain people these days do not realise or choose to ignore the fact that they are part of a bigger story. Perhaps that is why we as the Mushroom Hour Half-Hour find ourselves going back in order to move forward. By attempting to fully understand the bigger picture and the context in which we are placed, we aim to remain grounded in that larger narrative and by doing so hope to ensure that any moves we make are sincere, informed and not mediocre.

OKA: Any other projects we should keep an eye out for?

MHHH: In terms of up and coming projects, we will be dropping the debut album of a hip hop crew called The Pharaoh Express before the year is out. In terms of the Mushroom Hour, we have started holding jam sessions with Johannesburg-based musicians, which we will be putting out (hopefully on vinyl) in the future. We are also working on a mixtape and 2 new podcasts, all of which should be out in the next few months. For other podcasts or mixtapes recently released by Mind Your Head affiliates, check out an Ebony audio narrative that the Mushroom Hour’s own Kool oNe Ebony did for The Fly Machine Sessions and a kwaito odyssey by our Mushroom Brother, Soul Diablo.