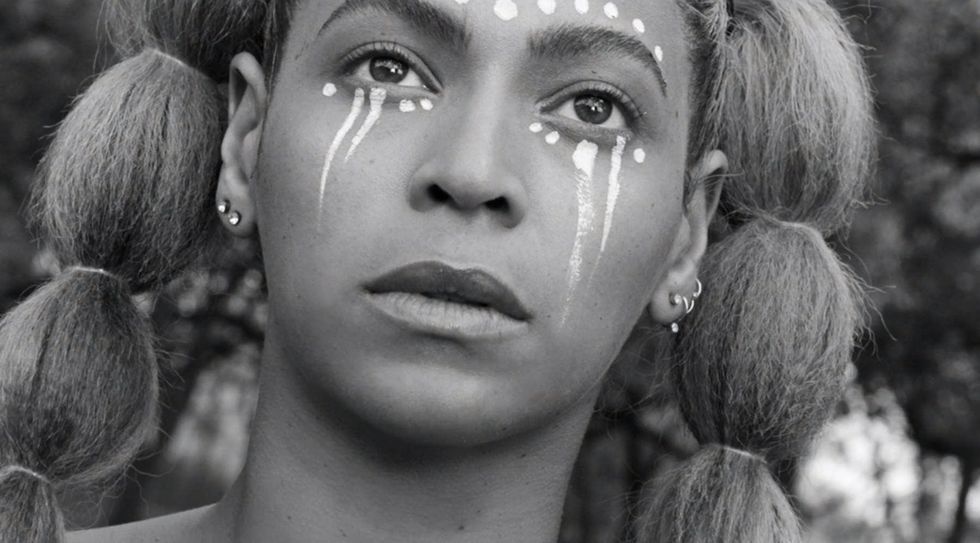 When picking our favorite music videos this year we not only looked at their visual appeal but also, and probably more importantly, their message.

2016's been a trying and taxing year—most of all for minorities and people of color. It's far clearer now than it was just back in January how important it is for the art we love, cherish, and routinely consume to speak-up, loudly, for what we believe in.

Whether bringing social injustices to light, celebrating black excellence, or showcasing female power, you'll find that all of our choices for The 16 Best Music Videos of 2016 are political statements, in their own particular way.

Below, we compile our favorite music videos of the year along with commentary from our staff and contributors.

Nigerian visual artist Laolu Senbanjo’s work plays a major role in Lemonade—the visual album from Beyoncé that premiered as a one-hour film on HBO—with body-painted dancers in his signature Afromysterics style taking up a portion of the hourlong event. His Yoruba-influenced markings even adorn Beyoncé at one point.

Overall, Lemonade is packed with references to afro-diasporic religion, afrofuturism and southern gothic tropes. Featuring cameos from the likes of Serena Williams, the Ibeyi sisters, Chloe x Halle, Amandla Stenberg, Zendaya, and the poetry of Warsan Shire, Lemonade was easily one of most compelling albums and videos that came out this year. —Aaron Leaf

If I’m being totally honest here, Branko had this song last year that’s made me cry on a few occasions. The song in question is “Let Me Go,” off the Lisbon-based Buraka Som Sistema co-founder and producer’s multi-city solo album, ATLAS, and features one of my favorite vocalists, South African star Nonku Phiri, and Soulection beatmaker Mr. Carmack.

Their encounter resulted in a dreamy pairing of Branko’s zouk bass and Phiri’s gorgeous Venda and English-sung melodies. Though the song’s conception may have been in Cape Town, its visuals are a love letter to the city of Johannesburg.

Africa's newly-crowned 'best group' Sauti Sol returned to their old high school, Upper Hill School, in Nairobi to record the music video for “Kuliko Jana,” a standout single from their album Live and Die in Afrika.

The beautiful a capella song, which features the Upper Hill school choir (Redfourth Chorus), speaks on the “steadfast love of the Lord,” the band mentions. Its stunning black-and-white music video was inspired by an earlier visit to the same school, in which the band was filmed singing a special rendition of their single with the school's students.

That initial impromptu video went viral. Now, the official version is on its way to becoming a global hit. —Kam Tambini

The Black British experience is a dream and nightmare in Sierra Leonean-British artist Brother Portrait’s “Seeview/Rearview.”

The clip starts off in a beautiful and breezy loft, in which Brother Portrait sips tea and enjoy a meal with friends and family, before things quickly shatter into a maniacal warehouse scenario drained of all color.

The video was directed by emerging Algerian photographer and filmmaker Nadira Amrani, a visual artist “interested in the migrant memory and new generation of Africa,” she mentions. “The film really looks at this idea of cultural limbo and understanding self dual identity.” —KT

“To Li” is featured on Ghanaian vocalist Jojo Abot’s conceptual EP Fyfya Woto, which traces the love story of the fictional Ghanaian title character against a backdrop of “slavery and divide."

“To Li” is described by Abot as “a term used to call out a questionable narrative or put a narrator on the spot. It’s a dramatic term that cuts through the bullshit and calls it for what it is. In a generation of young people determined to take life by the horns with little tolerance for injustice and inequality, ‘To Li’ contributes to that narrative and spirit of cutting through the layers in search of honesty and truth.”

The song's video—directed by Robert Kolodny with the story by Abot—features doubles, and triples, of the singer as she floats in front of graffiti and paint-peeling Brooklyn brick. It harkens back to a long forgotten time of NYC folklore: summer. —Abel Shifferaw

It’s kind of hard to go wrong when you have two stars of this caliber on one track. Tiwa Savage and Wizkid, two of our favorite Nigerian artists around, came through with an all-around boss anthem in “Bad.”

The two superstars can be seen tagging graffiti on a wall and stunting on a motorcycle as they drop their verses over the P2J-produced beat. The music video features cameos from Banky W, Funke Akidenle, Denrele, and—of course—plenty of dabs. —KT

Given the simultaneously pointed (Don’t touch Solange’s hair. Period.), yet abstract nature of “Don’t Touch My Hair,” the track’s transition to visual is a smooth and continuous one, with no apparent gaps between the two mediums.

And if the hairstyles are the paint, then the Black bodies are surely the canvas, live works of art and vehicles of an unapologetic perspective from a person confident enough to leave it open to interpretation. —Patrice Peck

Now, more than ever, we need art that encapsulates the experiences of women of color.

Princess Nokia’s “Brujas” is just that. A highlight off the Afro-Nuyorican MC’s 1992 mixtape, it’s a much-needed celebration of Afro-Latina identity and its rich spiritual heritage.

The 24-year-old New Yorker (Destiny Nicole Frasqueri) draws on Santeria and Yoruba spirituality to deliver a blazing track that highlights the many layers of her Afro-Latina identity. “I’m that Blackorican bruja. Straight out from the Yoruba, and my people come from Africa-diaspora Cuba,” the singer rhymes over chopped and screwed production.

The mystifying aura of these divinities is reproduced in an ethereal video. Co-directed by Princess Nokia and New-York-based, Turkish filmmaker Asli Baykal, it sees the artist and a group of her sisters—who look like deities themselves in their afros and all-white garments—channeling the spirits as they congregate in a forest to serve pure black and brown girl magic. —Damola Durosomo