My Dirac: Exploring Culture and Belonging Through Clothing 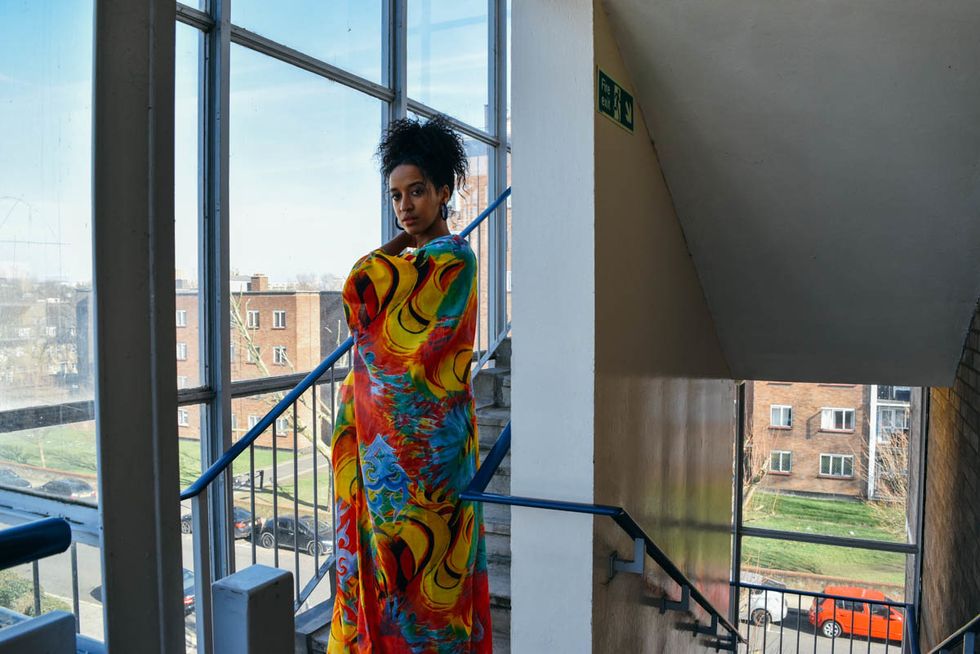 In this essay from her new websiteIna'Xaashi, the author explains how the Somali dirac came to symbolise the connection between her British and Somali identities

Ina'Xaashi (meaning daughter of Hashi) is an online project exploring cultural belonging for Somali diaspora through fashion and writing by London-based writer Hoda Hashi. Issue One on identity and belonging opens with this story about Hoda's relationship with the Somali dirac dress and its significance to understanding her own diaspora identity.

The bedroom filled with the thick scent of uunsi as hooyo (Mum) lifted her dirac dress from where it hung to reveal the fiery dabqaad (incense burner) hidden beneath it. Endless clouds of smoke billowed from it, reaching toward the bedroom walls like an outstretched hand.

Uunsi, a traditional Somali incense, was a smell that planted roots in everything it touched and laughed in the face of our modern attempts to wash it away. I looked down at my pyjamas, resigned to the knowledge that they would forever smell like uunsi.

Perhaps this was not surprising; uunsi had stood the test of time. Maritime traders as far as back as 1 AD marvelled at the abundance of frankincense offered by Somali traders and I smiled at the thought of our ancestors being enveloped in the same sweet cloud of smoke.

Hooyo slipped on her dirac and I watched the metres of fabric elegantly drape down to the ground and layer her tall frame like the soft branches of a willow tree. Her smooth, caramel-toned skin shimmered with tinted moisturiser as the last rays of the evening sun pierced through the window. She looked two inches taller with the dress on and I stared at her, slightly open-mouthed, wondering whether there had ever been a woman more beautiful.

On the rare occasions that I was home alone, I would sometimes creep into my mother's room and try on her diracs before carefully slotting them back into the wardrobe, but they never looked the same on me.

The quirk of the dirac is that it is a shape-shifting item of clothing which takes on the form and characteristics of the woman inside it—on my hooyo, it had a towering quality that exuded confidence whereas my teenage reflection projected something quite different. I certainly looked like hooyo on the outside—my long, slender nose and laughter lines attested to that—but there was little resemblance in terms of our experiences.

The youth of 1960s Somalia were not concerned with the old guard's criticisms when they developed their own, new forms of poetry and recited them in vibrant, scandalously mixed parties under cover of night.

For me, the uunsi-stroked walls of our council flat represented a border between two worlds that I occupied simultaneously: the traditional Somali household and modern Britain. Hooyo also lived in both worlds, but as the head of the former who had arrived in this country as an adult, she had a strong sense of where she belonged in the scheme of things. A sense of surety that she wore as clearly as the hijab on her head.

By contrast, I existed on a wide spectrum somewhere between the two, belonging to both and neither at the same time.

At one end of this spectrum was a rigid sense of Somaliness (or "Somalinimo") that was uncompromising in its demand for total adherence: put simply, you were either all in, or out. Grounds for expulsion ranged from the very serious (like marrying a non-Muslim or being openly gay) to the reasonably trivial (like wearing revealing clothes).

There were members of my own family who had broken the rules and were never spoken of again—if you ran into their parents and found yourself routinely asking about their children, there was a silent understanding that the disgraced child's name would be politely omitted from your enquiries.

As I grew older and made decisions that were not seen as in keeping with this standard of Somalinimo, I found myself on the receiving end of the Voldemort treatment. "How's your son?" people would ask my mother, as if I had never existed. My mother, who has never in her life taken an insult lying down, would routinely fire back "Why don't you ever ask about Hoda?", but it was a question to which she knew the answer.

As I stood in my mother's bedroom, it was easy to understand why her dirac weighed heavily on my teenage shoulders. How was I supposed to meet this threshold of Somaliness in a way that was authentic to me when my entire life had been spent in East London?

If being British in the twenty-first century could mean whatever you wanted it to mean, then did it mean anything at all?

I had always been fiercely proud of my Somali roots but the truth is I never felt like I fitted in with the mindset of the Somalis around me. I did not perceive this difference to be something that made me better than anyone else, I just accepted it as the nature of things, like the rising of the sun or grey skies in London.

At the opposite end of the spectrum was multicultural Britain which, much like the dirac, was a one-size-fits-all model designed to paper over differences. Unlike my Somali side, multiculturalism was more of a laissez-faire model of identity characterised by its willingness to let people create their own definition of what it is to be British, without judgement or interference.

But this model's strength was also, at times, its weakness because when something is as shapeless as multiculturalism, it is difficult to pin down exactly what one belongs to.

If being British in the twenty-first century could mean whatever you wanted it to mean, then did it mean anything at all? I asked myself this question many times before eventually coming to the conclusion that perhaps openness and tolerance of difference were its modern central tenets. And with that knowledge came the next question: how could I marry my open sense of Britishness with the sense of Somalinimo that was also such a big part of my life?

The central flaw in this question was the notion that Somalinimo, as I knew it, was a fixed thing that belonged to and should be determined by someone other than me. As if there had been a meeting of elders that I had missed in the early '90s where the parameters of Somali identity in Britain were drawn, with edicts like: "we decree that no Somali shall marry a non-Somali without feeling the weight of social exclusion -- unless that Somali is a man, and he feels like it".

Members of my family who had broken the rules were never spoken of again.

The children of immigrants are often set impossibly high standards by parents who single-handedly carry the heavy mantle of cultural preservation on their backs, with the disapproving spectre of their ancestors' in tow, looming large like an evening shadow. The result is viewing any challenge - even if this is evolution, rather than revolution - of the old ways as anathema.

In reality, I am both British and Somali, and I have every right to refashion this narrative in a way that authentically reflects my outlook and experiences.

The idea that culture is a stagnant thing that should be immune to scrutiny or development is illogical. The youth of 1960s Somalia were not concerned with the old guard's criticisms when they developed their own, new forms of poetry and recited them in vibrant, scandalously mixed parties under cover of night. Anti-FGM heroines like Waris Dirie and Leyla Hussein were not afraid of disturbing the established way when they set out to end this indefensible "tradition" through a coordinated campaign of criticism.

This realisation irreversibly shifted something in me; my outlook would thereafter be defined by a different kind of Somalinimo, the kind where I unapologetically showcased my love for Somalia's colourful traditions of music, theatre and traditional dress, without waiting for anyone's permission to do so, secure in the knowledge that my claim to it is as legitimate as that of any other Somali.

And when I wear my dirac today, whether it is in the traditional form or my own contemporary interpretation, I wear it with the same commanding sense of confidence, and ownership, as the women before me, and it fits perfectly.