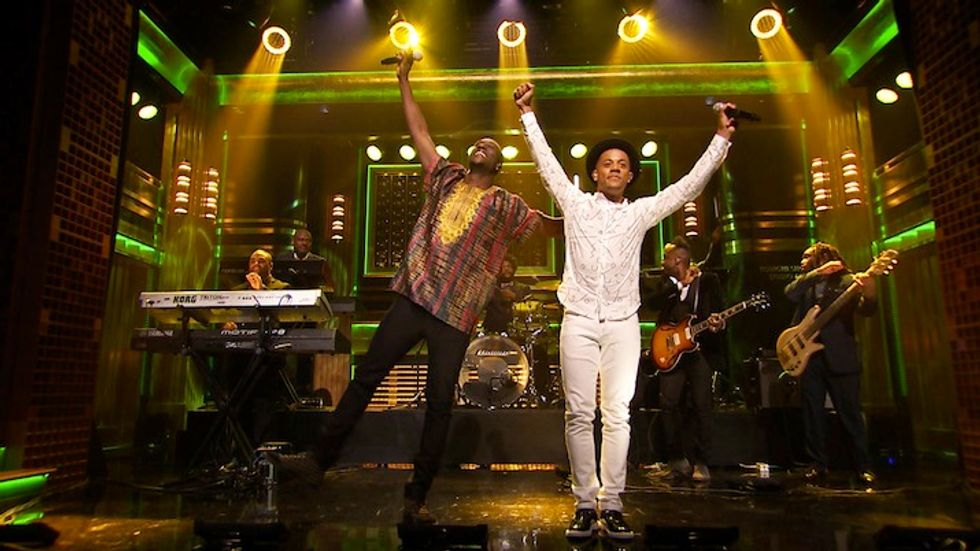 Afro-Norwegian singers/songwriters Nico & Vinz perform their summer anthem "Am I Wrong" live on The Tonight Show With Jimmy Fallon.

Afro-Norwegians Nico Sereba and Vincent Dery, more famously known by the duo’s stage name Nico & Vinz, have taken over airways with their infectious, feel-good, summer anthem “Am I Wrong” (the track is the most shazam-ed song at the moment, top 5 on iTunes singles charts, top 5 on Spotify's most played tracks and has become a multi-platinum #1 hit… I could go on but I digress). This week the Oslo-based pair rocked The Tonight Show with Jimmy Fallon backed by The Roots with a rousing live performance of their 'no clouds in the sky'-ready single. The singer/songwriters of Ivorian and Ghanaian descent respectively got the Tonight Show crowd on their feet with some Azonto-infused dance moves and contagious energy that filled the studio.

Often joking that there ARE black people in Norway, Nico & Vinz are extremely vocal about their blended ethnicities and the many spaces and places that shape their eclectic, pop, West African dance, reggae fused sound. Recently, the pair paid tribute to their African heritage in the Kavar Singh-directed visuals for their chart-smashing hit, for which they traveled to Maun, Bostwana to capture some light-hearted, everyday moments that are often overshadowed in Western media by representations that cloud Africa in tragedy and old and tired tropes.

The pair will be bringing their 'stay true to yourself' anthem — which was inspired by their personal experience possessing huge dreams in a small country — and their genre-bending borderless music to stages around the world as they embark on a run of shows opening for Bruno Mars' "Moonshine Jungle" tour. Listen to an interview where the duo talks more about their African roots and check out Nico & Vinz's Tonight Show performance below.