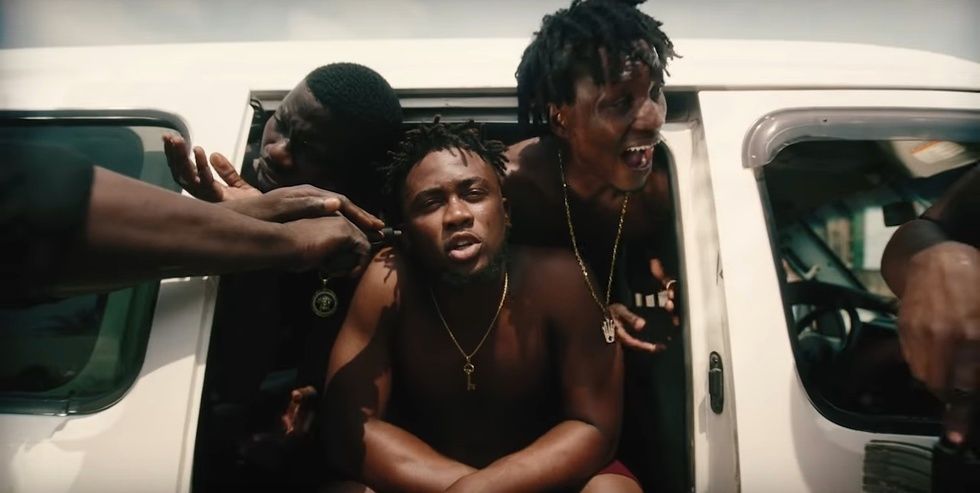 Read ahead for our selection of the best Nigerian songs of March.

A millennial's fear is well expressed in the first verse off Nonso Amadi's first big single of the year: "'cause you and me hit it one time / all we have is this one life and / call me back when you're online." Exhibitionist bike riding (not advised) is featured in the scenic video, set in a seaside town, but what most holds the attention is Amadi who has a very watchable screen presence that was not evident in his older videos. It could turn out to be an enjoyable part of his live performances.

"This song will undoubtedly be soundtracking a lot of nights and dance floors" we previously wrote about Yemi Alade's "Yaji." Brainee's terse guest verse is fleeting while Slimcase is ever the welcomed presence who rarely outstays, in several guises as hype man, background vocalists and street sage with a pithy phrase:"if you no money, get sense." "Yaji" is Hausa for a sweet and hot ground pepper and "gbe body" is Yoruba for "move away," an in-trend phrase used for its authoritative ring but turned into a dance instruction by Yemi Alade who has always excelled over throbbing, uptempo production since her first hit "Johnny."

In the video for "Agu", Phyno has forced into harmony beautiful shots of landscapes with footage from his concerts which, in Onitsha (Eastern Nigeria), brought in a reported 25,000 fans in its first edition in 2017, rising to 50,000 in 2019.

The urging song title is little needed on account of the strongly melodic beat and Wande Coal's engaged singing voice. The sex-as-food reference is meant as humor but goes overboard in one instant: "dem wan chop my facility."

The work of producer Young Willis, this playful, mid-tempo beat is common fodder for rappers to flex about being fly and savvy. A feel-good song about feeling good may seem cheesy, but Ice Prince's knack for catchy hooks is even more enjoyable when anchored by winning guest verses from Phyno and Falz.

This is trap-psychedelia. Feelings of justified spite towards a lover rendered in sweet melodies and a soothing voice that makes heartbreaks seem seductive—unless they are: "did I mention I'm feeling fucking great / you gon' wash them dishes on them dates / no more loving you I'm good, I'm straight." "How" is the first single from "Gemini", the much anticipated debut album by Tay Iwar, the singer and producer who is one of the leading lights of Nigeria's much discussed "alte" music.

Worth over $10 billion, Aliko Dangote is the Nigerian businessman whose surname Burna Boy has used as a song of aspiration. The sun-dappled piano recalls the lush goodness of his much loved song "Like To Party" while the yearning in his gruff voice makes for impassioned singing which tugs the emotional strings. The latest in a run of very impressive singles released by the singer this year, and who, this March, has also dropped a collaborative 4 track EP with LA-based electronic duo, DJDS, titled Steel & Copper.

Seyi Shay has siphoned the most enjoyable bits of Lagbaja's evergreen classic "Konko Below" as the hook for her collaboration with Tanzanian singer Hamornize. Her lyrics rely on Nigeriansisms and snatches of Yoruba while he incorporates pidgin when singing in Kiswahili.

The near 8 million views Skiibi's last single "Sensima" reached on Youtube are impressive for a newcomer and raised expectations for its follow-up. "Onaema" does not disappoint, especially in the way Skiibi's affecting melodies are married to the heavily rhythmic production that insists on being liked. The video doesn't stray too far from the template half naked models and nice furnishings which, in this case, is tasteful.

The otherwise opposing sensibilities of humility and pride make happy partners on this paean to money. Over a swinging melodic beat, on account of the short and repetitive violin phrases and a roving guitar, both Patoranking and Davido blend well enough by not getting in each other's way.

LADIPOE 'Jaiye ( Time of Our Lives )'

Producer Johnny Drille relies on the tingling goodness of a marimba to define the production on this orphaned single that is not included in the rapper's debut project, Talk About Poe, released last October. The "Jaiye" of the title is a celebration of good times and can be viewed as the victory lap of a rapper enjoying early success.

Kizz Daniel delivered a superior album last November when he released, No Bad Songz, a title that is true of all 20 tracks on his sophomore effort. Produced by Young John, "Fuck You" is another little marvel of songmaking about a spurned love: "na you the cheat na me the beg / make una check ogbanje / shebi na me the find sisi yellow." The repetition of the offensive song title has real bite and could easily be tasteless if done by another singer.