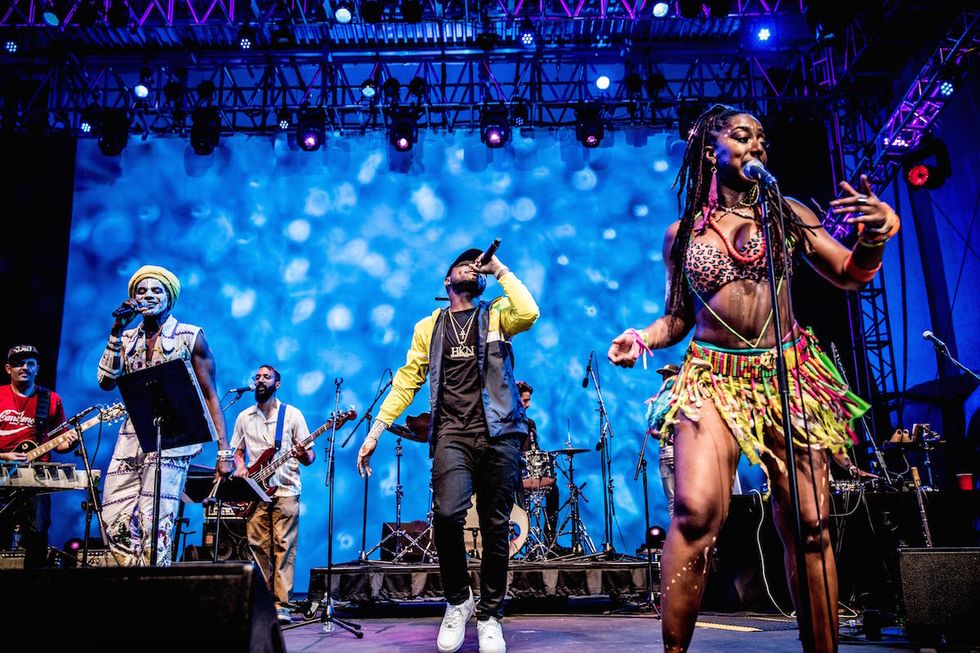 Choosing one’s top ten prized fruits from the good harvest of 2016 is no small task, but I'm under orders from the editor and being employed does have its appeal.

More to the point, it’s been a bountiful year for Nigerian pop or Afrobeats or afrobeats or Afro-pop or, less confusedly, pop.

It's been interesting watching how albums released this year are denoted on Apple Music or Spotify, which have since become the all-conquering overlords who unified the different and disparate musical tribes as streaming sites, charts and soon will be everything that is to do with music.

The confusion might be Spotify or Apple's, but it's also emblematic of the state of Nigerian pop which has also rapidly blossomed.

The ten songs here are as subjective as they are objective, in the same way public reception is as important as personal tastes, and good music is as convincing as bad music. Enjoy.

“Who's your daddy?” in Nigerian parlance could double as preamble to an actual pick-up line and as a status identifier.

It suited the pervy older man that Banky W characterised on "Jasi." It doesn't suit Ycee,a young man, but when he's rap-singing the line in the hook and verses for "Omo Alhaji," this hybrid delivery—American-accented rap and the indigenous preference of afrobeat fans—wins you over.

The references might be essentially Nigerian, but E. Kelly’s beat is undoubtedly Ghanaian in its use of hi-hats. This blend of in-dance and in-sound is a sure winner. No doubt, the track's a big reason why Ycee was such an attractive proposition for a deal with Sony.

Patoranking is the real deal. His afrobeats cred is not up for debate. But how much of a true dancehall artist he is was confirmed for me when a Brixton roadman I know bigged him up.

His blend of patois and pidgin is seamless, requiring close attention to unpick. Ghanaian star Sarkodie is a mad-fluent spitter whose verse here is faultless in cadence, as always, even when delivered in Twi.

"No Kissing Baby" was produced by GospelOnDeBeatz, who uses a syncopated hi-hat that is uniquely Ghanaian (see our previous song choice), but is being borrowed by an increasing number of Nigerian producers.

The songs's music video, released in June on YouTube, has already broken ten million views. The number has been steadily growing since then, which must mean that it's still being watched by returnees with unsatiated appetites.

Tekno 2.0 ("Dance" being version 1.0) started in earnest with "Duro," which made the rounds on SoundCloud and YouTube before its not-as-exciting video dropped and gave the song a wider audience, making it a sure-fire hit. So it must have made sense to capitalise on the success of "Duro" with another song in the same tempo.

"Pana" is a slow soother, much like "Duro" and "Diana." The lyrics don't add up to much except memorable rhymes on account of their clunkiness (fajaba, lagbaja, gwagwalada). Priorities, man.

Put it this way, if Tekno was allowed to headline his and Dbanj’s recently cancelled London concert, after the furore between D'banj and the promoters, most ticket holders would have happily made the trip to O2 in the winter cold, prepared to skip past Tekno’s unsubstantial catalogue, only for the one moment when he decides to play "Pana."

Olamide "Who You Epp?"

Until just over ten years ago, Nigerian rappers proudly flaunted both true and false African-American accents and colloquialisms. Now, afrobeats has grown into a confident genre that would rather make its Nigerian-isms fashionable (confirm = confam, paper = pepper and, here, help = epp).

This is a chief attribute of the indigenous rap wave (hopefully it's more than that) which is to take pride and ownership in one's own culture, colloquialism and idiolect, doing away with imported and rooted ideas of propriety—“I don't know how to knot tie.”

Shizzi is said to have made the beat in 15 minutes and Olamide, as always, raps as if he's shrugging someone off, a style that is effective here as he tells off, presumably, a one time associate who has returned to his fray now that he's made.

Reekado Banks is the one artist possibly able to fill in the crevasse left behind by D'banj’s departure from Mo Hits.

Reconstituting into Mavins with the addition of Korede Bello, Di'ja and Tiwa Savage, Don Jazzy produced Banks' first single, "Chop Am," in 2014. But production duties for his array of artists have since been delegated to his lieutenant Babyfresh, who crafted "Problem"

Rekaado Banks' debut album is a pot of gems from which "Problem" sparkles. His singing, never an octave high, shows an improved confidence on account of being mannered and unshowy. Neither has Babyfresh’s tag “this gbedu is a problem” ever been as apt or his beat making as mature.