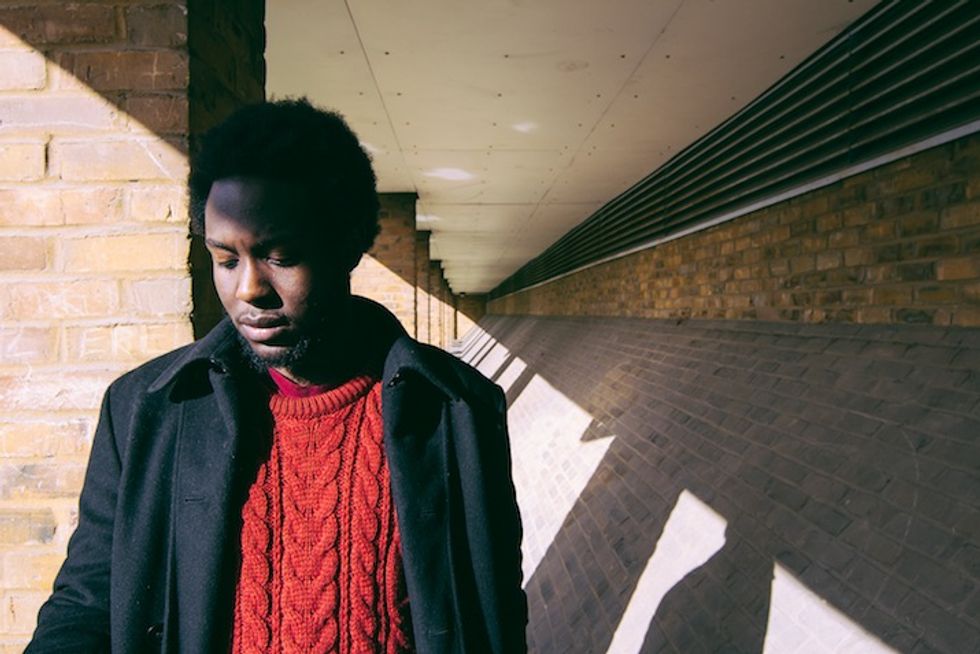 Earlier this week Nigerian poet Caleb Femi reached out to us with his spoken word account of a young African generation in London's Peckham district. A teacher as well as a member of the UK-based SXWKS creative collective, Femi says his work deals with the ineffability of the British-Nigerian experience. Children of the 'Narm, he wrote, "tells a personal story of the African residents of Peckham, London touching on issues involving assimilation, memory, displacement, education, gang culture and its treatment in the British Media." The poet recently set the spoken word piece to jazzy beats and scenes around Peckham in a video shot by Jolade Olusanya and Siobhan Banful. In the email Q&A below, Femi tells us more about his poetry and the "children of the 'narm."

Okayafrica: Who are the "Children of the 'Narm"?

Caleb Femi: The children of the 'Narm are children and young people who grew up in Peckham during the 90s, 00s and even today. They are children who come from Africa and the Caribbean, who live or lived in the estates or houses in and around Peckham.

'Narm derives from the word Peckham. During the early 2000s, children that lived in the estates decided to give Peckham the name 'Vietnam' to draw parallels between the high knife and gun crime culture they experienced and the warlike environment of the Vietnam War. The name soon transformed into 'Pecknarm' which is a merging of Peckham and Vietnam. Eventually, that was cut down to 'Narm.

OKA: What inspired you to write this poem?

CF: This poem, like all my poems, is inspired by my personal experiences. For me, this poem was a form of self-healing and growth. It brought me to a point where I had to examine and confront my childhood experiences by looking at the things that I long convinced myself was 'normal' or 'not a big deal'; things to do with culture, belonging, crime, standard of living (to name a few).

Ultimately, I decided to release the poem as I believe that I have a duty to represent a generation of people that grew up in Peckham (and by extension other areas of the UK that is similar). Our experiences should not be forgotten or marginalised instead it should be used as a point of reference in order to draw strength and wisdom from.

OKA: Who did the music for the "Children of the 'Narm" video?

CF: The music is by a producer from Manchester U.K named Riddle.

OKA: Where did you shoot the video? Why did you pick these locations?

CF: I shot the video in three main locations in Peckham as well as a drive-around of the area in general.

Locations: Yellow Brick Estate, Damilola Taylor Center and Gloucester Grove estate. I picked these locations because they are the last remnants of the 'old' Peckham and I wanted to give viewers (especially those who are familiar with Peckham) a sense of the environment I grew up in. This is especially true with Gloucester Grove Estate as it almost identical looking to the old North Peckham Estate. I also heard that the Damilola Taylor Center, perhaps the only physical representation of my generation in Peckham, was financially in trouble and could face closure so I wanted to give it some exposure, don't know it will make any difference. Since the gentrification of the area began many of the tower blocks and buildings have been knocked down (ironic because this is what should have been done decades ago).

OKA: What was your experience growing up in London?

CF: When I was 7 years old, I moved to London from Jos (Nigeria). A small one bedroom flat in the heart of the notorious North Peckham estate was where my parents, four other siblings and I lived. The area had a very high concentration of ethnic people and that was the main reason why my parents moved there; to draw solidarity from people facing the same issues in life. As a child I didn't enjoy that same feeling of solidarity as there was a clear divide between the Black-Immigrant children and Black-British children. Our culture, accents and even the games we played were ridiculed to the point where became determined to shed ourselves of our 'African-ness'.

North Peckham was notorious for its high crime rates, and as a child I didn't fully grasp the severity of the situation until I was 10 years old when Damilola Taylor, a boy the same age as me and whose face I knew, was stabbed to death on our estate. I can still remember the morning we all found out, the journalist, the cameras, the silence amongst the children and the shaking of heads from the adult residents. Damilola was the first not the last. Even after the estate was knocked down, the violence remained especially during my teenage years as many of my friends were killed by knives or guns and ended up serving long stretches in prison. Even I, with my 12 GCSEs, wasn't exempt from this violence as I was stabbed and shot (separate incidents) in my late teens. The media made it a whole thing about knife and gun related crime but the truth of the matter is it was deeper than that. It had systematic ties beyond the knowledge of the everyday Peckham resident.

Music was a big part of my life growing up. I was heavily involved in the rise of Grime music in the early 2000s. My friends are I formed a relatively well-known Grime crew that had a two hour slot on radio stations such as OnTop Fm and Real Fm.

OKA: How would you describe the British-Nigerian experience?

CF: For me, the British-Nigerian experience is a cocktailed experience where I interpret my environment and the events that occur from the scope of a Nigerian child, a Black British child and a Black British adult. These three perspectives have been moulded by distinguishable cultures, discourses and politics and together inform the nature of not only my poetry but my everyday life.

CF: SXWKS (Six Weeks) is a creative collective comprising of photographers, videographers, poets, writers, musicians, rappers, illustrators (the list goes on). There are around 15 members in the collective all from an African or Caribbean background and based in London, Bristol and Leicester. SXWKS was established with the aim of perpetuating the childlike freedom pursued in our youth. The name of the collective is inspired by the British 6 weeks summer holiday which, for us, represented a time of unadulterated and guilt-free freedom; it invoked the inceptions of ideas, the abandonment of convention, the emancipation of our minds. Our vision is bring creativity and passion back to the forefront of everyday life especially with the younger generation.

The collective has a variety of purposes that either serve the individual members and the society we live in. One purpose is collaboration; working together to develop and expand our creative disciplines (we usually have SXWKS events to showcase our work). Another purpose is to use our art to inspire and develop a creative drive among young people; we have put on a few poetry and illustration workshops in secondary schools around London.

OKA: Who are some of your favorite poets?

CF: A few of my favourite poets include: