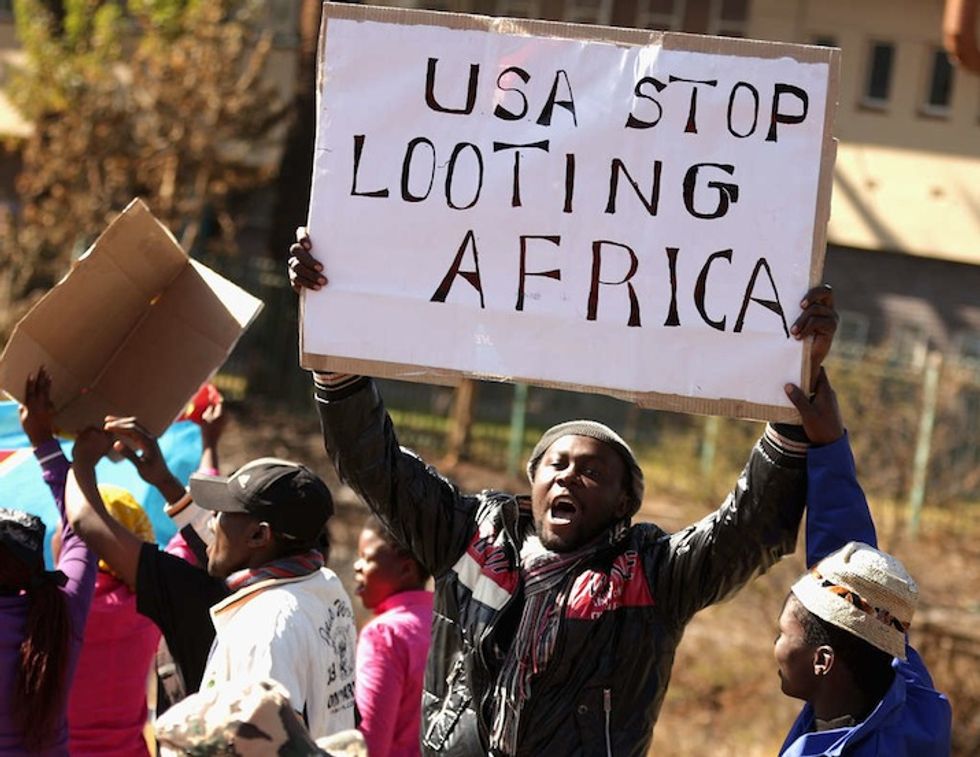 The issues underlying the anti-U.S.A protests that met President Barack Obama on the South African leg of his 2013 African Tour

Obama’s weekend trip to South Africa was certainly not what he might have expected when he was inaugurated in 2008. The light of the (once) shining star of the developed world was dimmed by anti-Obama and wider anti-American protests. The protests marked the resurgence of the anti-American sentiment that was briefly mopped up by the excitement surrounding the election of the U.S.'s first black President.  Obama's election shifted the conception of America from Bush-era 'Bully of The World' to a beacon of hope and progress.

But the number of the disillusioned and disgruntled has grown as Obama has distanced himself from his African connection and positioned himself firmly as an American President. Leaving the less attractive aspects of American foreign policy to come to the fore,  the luster of an "African son" becoming American president has faded for many South Africans.

The first sign of upset came when University of Johannesburg (UJ) students and lecturers protested the institution’s decision to confer an honorary law degree to the American President. While the students and lecturers cited the fact that it was “undemocratic” and against university policy to confer honorary degrees to sitting presidents, the main point of contention was alleged human rights violations by Obama. The university dismissed the objections and decided to continue with its conferment.

The next opposition call came from the Muslim Lawyer’s Association of South Africa. Pointing to the likes of U.S. drone attacks in Pakistan, they appealed to the South African Police Service (SAPS) and national director of Public Prosecutions to have Obama “investigated, charged, arrested and tried in a South African court for war crimes, crimes against humanity and genocide” in accordance with International Customary Law enshrined in the Rome Statute Act. This application was quickly dismissed by the National Prosecuting Authority (NPA).

By Friday morning it was the hashtags #ProtestUSA #NObama and a coordinated march from the Caledonian Stadium in Pretoria to the US Embassy in the city attended by the NObama Coalition. Along the way they chanted their grievances: “Free Palestine. Free Swaziland. Free Zimbabwe. Down Obama, down!” A large banner picturing Obama read “Meet the world’s top assassin,” another demanded “Obama stop supporting dictators in Africa. No oil here, move on.”

By the time the Obamas arrived at the Union buildings of Pretoria by helicopter, the SAPS were particularly conspicuous on the major highways and roads of Pretoria and Johannesburg. Just days before, several helicopters had been seen circling the suburbs of both cities.

At the Union building discussions with South African President Jacob Zuma he threw his weight behind the extension of the African Growth and Opportunity Act (AGOA), and cautioned against the influence of China. Meanwhile, in response to the discontent registered amongst South Africans, United States Charges d’affaires Virginia E Palmer said, “We support freedom of expression and right to opinion.”

Come Saturday, Obama had accepted the honorary degree but said he would not receive it during his visit, citing too many other commitments. As part of his Young African Leaders Initiative, he held a town-hall style meeting at the UJ’s Soweto Campus where he discussed youth leadership and empowerment. The meeting recalled the glory days of first election campaign of Obama as an electric and exceptional leader, not yet blemished by unfavourable foreign policy decisions.

On his Sunday visit to Cape Town, he stopped by Robben Island, the prison where his icon Mandela was prisoner for almost three decades. Later he delivered an address at the University of Cape Town (UCT), where a group of NObama Coalition protestors could be seen close by carrying placards and protesting.

POTUS had saved the best for last. It was during this address that he announced his $7 billion Power Africa initiative. The aim of the initiative (read, carrot)? To shine “light where there’s currently been darkness.”