NON Is A Worldwide Resistance Movement For African Artists 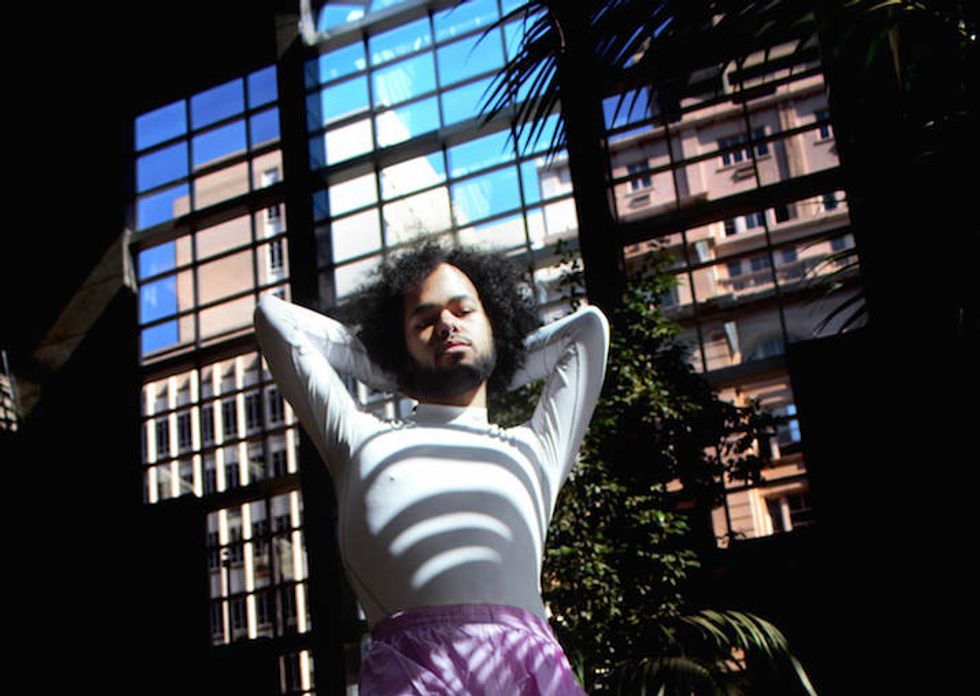 The Richmond, Virginia-based Nigerian producer and artist Chino Amobi has been making music since his early teenage years. He’s come a long way from his adolescent rap group Neo Negro League, and is now one of the co-founders of avant-garde pan-diasporic movement NON Worldwide alongside Cape Town’s ANGEL-HO and London-based artist Nkisi.

NON describe themselves as “a collective of African artists using sound as their primary media, to articulate the visible and invisible structures that create binaries in society, and in turn distribute power.” They’ve brought their brand of confrontational glitch music to museums like MoCADA and clubs around the world. We caught up with Chino after his London gig to discuss NON, community and acts of decolonisation.

Where did the name NON come from?

Chino Amobi: ANGEL-HO and I were initially talking about a name for the label that we wanted people to be able to identify with. We wanted the name to be based on our experience and the experience of our intended community. NON fit perfectly because it describes us in terms of our relationship to institutions, the music industry, daily living, plus our identities nationally, politically, and aesthetically.

NON described exactly who we thought we were. I like it because it allows room for others to enter, it’s defined by its rejection of definition. And we didn’t want to be limited as a label, we’re beyond that and we want to think of NON as a way of moving forward, a movement.

Could you explain the idea behind your manifesto, “NON SUPPORTS ITS CITIZENS OF THE UNITED RESISTANCE”?

When I think about United Resistance I think about any movement that runs counter to the (massive) exploitation of members of the African diaspora. We’re resisting this exploitation by encouraging unity, cultivation of the arts, social growth and economic autonomy.

Sound is where we start the resistance from, but ultimately it transcends into all other realms, and whenever I see people resisting hegemony then I’m like “ok this is a NON moment, this is what we identify with, this is what we’re going to publish, this is what people need to see.”

How does that resistance manifest in the sound of the music you put out?

Sonically, I try to represent that resistance by using sounds that aren’t traditionally thought of as black or African sounds, I try to buck up against that.

I use sounds that people hear in daily situations, but use them in a repetitive and trance-like way that forces people to think critically about the sound they’re hearing in a new context. I try to make confrontational rather than escapist music. I want people to think, “what’s my next move gonna be after hearing this?” Using cacophony and unusual sonics, I reject the passive experience of listening, and try to use sounds that are active to wake the listener up and to bring them into the moment.

It’s the sound of us taking ownership of our oppression and that is very important. We’re mutating and unifying through the sounds we’re making.

How does your experience of growing up in Virginia with Nigerian parents, if at all, influence your music?

My African upbringing and heritage definitely influences my creative output in terms of family values. The Nigerian community I grew up with in Virginia was very close-knit and all about working together.

But at the same time there’s a disconnect I’ve always felt, I can’t speak Igbo so I never fully felt Nigerian or black American. And it’s that interstitial space that I inherently bring into my work, exploring the gaps criticality, and that’s definitely been influenced by my experience as a first generation Nigerian growing up in America. I then also translate that into a worldwide context because there are gaps that are bridged and connected internationally. I think a lot about pan-diasporic unity through design, performance and art.

You recently dropped "Airport Music For Black Folk," can you describe the concept behind that?

Yeah that comes off a collection of tracks I made traveling. Having been in many different airports, I was interested in the idea of the airport as an international space and yet a totally Eurocentric & Western manicured experience.

I was thinking a lot about what a black experience is in that space, how it feels to walk through the airport with confidence and not feel like Western culture has superiority over you. I also want the music to transcend that and allow people to understand that they encompass the whole world in them and that they have the power and agency to be an airplane in their own mind.

The name is also a pun on Brian Eno’s Music for Airports. I also find that there’s a lack of criticality with black experimental music - it doesn’t get championed - in the same way that black philosophers aren’t championed. So it’s me claiming this music as culturally significant—we are making changes on an international level.

You’ve just finished your European tour, what kind of crowds did you play to and how has the response been?

It’s been good to meet allies at these performances, and that’s been important. I played in Warsaw at an event called Intruder Alert. There’s currently a heavily right wing government in Poland but the kids at the show were so supportive and I feel that. They’re also trying to exist and create in an oppressive environment. It was great to take part in a wider conversation.

Some of the kids hadn’t heard of us before and others had travelled from far out to come to see us, and I respect that. I like to challenge the notions of what a club environment can be—bringing criticality into the club, but not divorcing it from someone being able to lose themselves in the crowd.

NON seems to be about afro-diasporic, subversive voices taking up space, particularly in the digital sphere. How would you like that to manifest in the physical world in the future?

The spark happens on the internet, but it’s the physical meeting, the forming of communities that makes all the work in the digital space worthwhile. You know you can post music and get 300 likes but what does that actually mean, whereas when you have an actual interaction, you realise this is what the seeds were sown for and the importance of culturally manifesting our philosophy.

Physical space is important as that’s where social justice and change actually occurs, the digital space simply facilitates it. Teaching, helping to feed one and other, sharing platforms with each other, our own architecture—wholistic, total immersion.

We’d also love for it to develop, to have NON as chapters around the world. So people feel able to say, “Oh I’m going to do my own NON event.” In the same way the Panthers had thousands of chapters I’d love for there to be groups mobilising around the world.

Have you played any shows in Africa yet, as ANGEL-Ho is based in Cape Town and you’ve got links with Lagos?

Not yet, but the goal is to work more there, travel and work in the communities extensively, training, learning, facilitating cross cultural exchange to empower the community through music and other avenues. Whether it’s challenging the perception of what African music can be or just empowering the people in the communities.

You previously released work under Diamond Black Hearted Boy. What caused the shift to releasing under your own name?

Yeah, I was performing under that name during art school, and I used a mask. It was very much centred around being a character, a kind of superhero. Then I turned 30 and I realised I didn’t want to hide behind a mask and that I wanted to claim ownership of what I was making, to be able to face someone as me without an alter ego. In the same way that Wangechi Mutu or Richard Serra or Philip Glass create, I want my work to be an extension of me.

Who are your influences, musical, literary or otherwise?

Malcolm X, Octavia Butler, Amiri Baraka, situational theorists, people who interrupted spaces and their critical reflection on contemporary popular culture. Beyoncé and Rhianna are also influences. Most people I listen to are my friends, like ANGEL-HO, Nkisi, Rabit, Scraaatch. I also listen to a lot of classical music like Arvo Pärt, Bulgarian folk music, and artists like Haleek Maul, Gaika and Burial—I always come back to Burial!

What can we expect from NON in the near future?

We’re currently working on a NON album which will feature the co-founders ANGEl-HO, Nkisi and collaborators. It should be out before the end of 2016, possibly on vinyl! And we’ve got a NON publication in the pipeline too.

Your music sounds like auditory decolonisation. What advice would you give to listeners who want to free themselves of the deeply-ingrained white supremacist paradigm?

Intentionally make an effort to build a local and international community, allowing you to transition from a passive consumer to an active producer—whether it’s through writing, performance, cooking, feeding each other, dancing, taking care of each other.