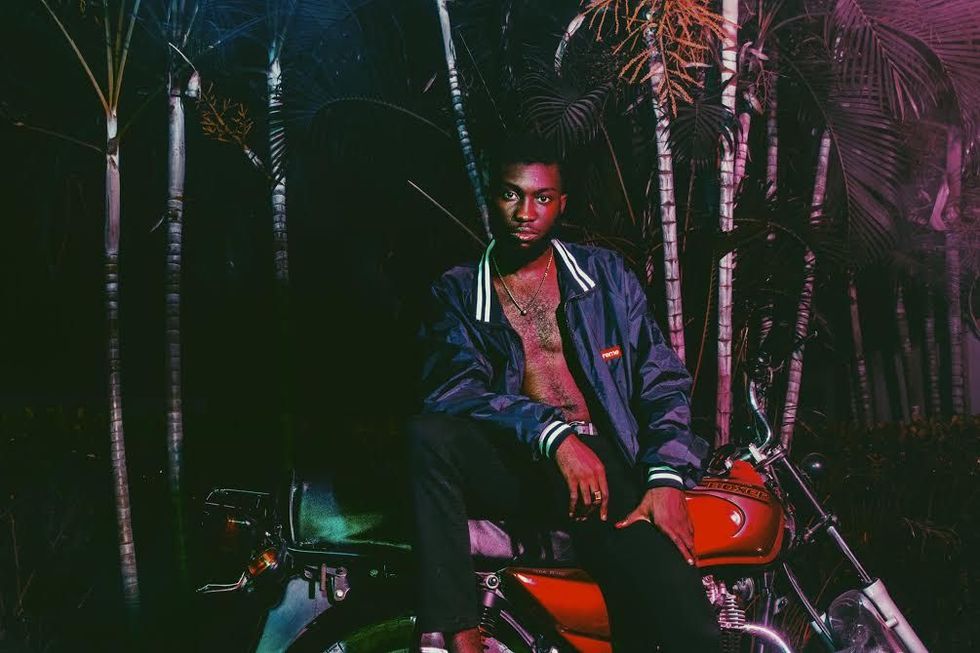 With his unique blend of afro-fusion, Odunsi is creating a sound that expands what it means to be an African artist.

Lagos’ creative culture is booming and we're seeing a wave of young people throughout Nigeria who see the possibility of taking their creative talents to the next level.

Artists like Odunsi The Engine, also known as Odunsi, are using their globalized world as a way to explore different cultures and shape their own sound.

Odunsi's approach to music mixes genres like afrobeat, soul, R&B and electronica. His style, which has been coined 'afro-fusion,' creates an experience that many people in the world haven’t heard. With it, Odunsi's shaped a sound that's not only hard to replicate but that also expands what it means to be an African artist.

His music has been received so well around the world that his track “Situationship” recently made Spotify’s U.S. Viral 50 and was featured on Billboard.

He's worked with artists likeSanti, whom he collaborated with on ‘Gangsta Fear,’ a track that made it on our best of 2016 song list. With no major label behind him and only one EP in, there's definitely a lot in store for Odunsi.

We got a chance to chat with Odunsi about the creative scene in Lagos, his inspirations and what is next for him in the New Year. Read on for our conversation with the artist.

At what moment did you decide that music is what you wanted to pursue full-time?

I decided to pursue music professionally on January 25, 2016. That was my “Yeah, let’s do this” moment. This was after I had recorded a song with GMK, I felt at that point that I wanted to do music for real.

If you weren’t making music, what would you be doing?

If I wasn’t making music, I might have become a lawyer or a professional football referee.

How has growing up in Lagos fueled your passion for music and inspired your content?

Growing up in Lagos, has been my biggest influence musically, because I have been able to interact in a place that is so energetic and very competitive.

At a young age the city really instills in you the value of your personal hustle and work ethic. Lagos also teaches you to find a way to create something out the little you have and that’s one major thing I have got from growing up here. It has taught me balance and how to work with different people and approach different situations.
"Growing up in Lagos, has been my biggest influence musically, because I have been able to interact in a place that is so energetic and very competitive. "

Talk a little bit about Nigeria’s creative scene and how it is shaping in the new generation?

Nigeria’s creative scene has been growing daily. There's always new content and new people creating and the amazing thing about it is a lot of the artists are really young. This is really new for Nigeria, to see a whole generation of young icons, people representing their culture in different ways through music, photography, music, movies and fashion.

What makes it even more beautiful is that there's a lot of collaboration and willingness to help. More young people now have mentors to look up to and are able to learn quicker than previous generations. It’s inspiring that more people are taking charge of their lives at a young age and more people are creating their own way to be successful.

You describe your sound as 'afro-fusion,' how would you explain this style?

Afro fusion as a style has been around for ages. I don’t know if the name has been around for as long but the style definitely has. We have had people like Angelique Kidjo and Wale Thompson that were afrofusion. They were creating music by blending direct influences from their roots and other places they experienced, which created a very unique sound. Over time, the genre has gotten bigger and now we have people like Burna Boy, Black Magic and newer artists who are still building a presence.

Your song “Situationship” recently made Spotify’s US Viral 50 and was featured on Billboard, did you expect the reaction for the song to be so big?

The song was an intentional release because I wanted to put out a song that had a style that no one had heard before, but at the same time, any one in the world could listen to. That’s what I try to do with my music, I want anyone in the world to be able to pick something from it, something to hold on to. So, I am not surprised that a lot of people could relate to it outside of Nigeria and Africa, but getting featured on Billboard was a big surprise and I’m thankful.

What was the experience like working with Santi on the track "Gangsta Fear" and seeing the video on MTV?

Santi has been like a brother to me because I grew into my complete artistry with him and learned a lot while working on the last project he put out (Suzie’s Funeral). It helped build my confidence and I learned a lot of things technically and how to relate with people.

"Gangsta Fear" was just a record that was a bit impromptu, we were on Skype one day and GMK was making the beat. I wasn’t interested in the song at first but Santi sent me an email after he had finished his part and asked me to jump on it. The funny thing is the song almost didn’t make it on to the project, little did we know that it was going to be a favorite for everyone. I still haven’t seen the video on TV unfortunately but I still get calls from people that they saw the video and like it. It’s a good feeling knowing that something you did while having fun has gotten so big.

Who are some of the Nigerian artist (any art form) that OkayAfrica readers should look out for?

There are so many talented artists coming out of Nigeria. We have Santi, Nonso Amadi, Lady Donli, Aylo, GMK, Zamir, Tomi Thomas, Genio Bambino, Bridge, Mafeni, DJ Femo, Tonero, Le Mav, Higo, Tay Iwar, Funbi, Dami Oniru and Doz. Then we have photographers like TSE and directors like Demola and UA. I can’t even mention all names because there are so many people doing amazing things in Africa, it’s a big family of creatives and were all growing together.

You currently don’t have any music videos out; can we expect any personal visuals in 2017?

There are going to be a lot of visuals, from short films to videos, photos and documentaries soon. I was taking my time to learn more about visuals before putting anything out.

What piece of advice would you give your younger self on how to approach the music industry?

"...just focus on my own sound, keep developing myself and making sure I am the best version of me and not trying to compete with anyone."

If you could do a show in any city, where would it be?

Sao Paulo, Brazil would be a go-to location. I have an obsession with that city and I don’t know why. I like the way the place is set up and the architecture. I really like the whole vibe there and I think of it as a place that could one day be my home.

What’s next for Odunsi?

I have a project that’s very important to me dropping this year and a major single dropping just before the summer. The project is going to be very different from my last one because I have grown a lot more and I have a lot more to push in terms of groundbreaking sounds.

There’s a lot more fusion in this project and I just want to make a statement to the world. I want people to see that it’s possible to make any kind of music and blend anything together.