Opinion: Why Is Bono So Wrong About Combatting Violent Extremism? 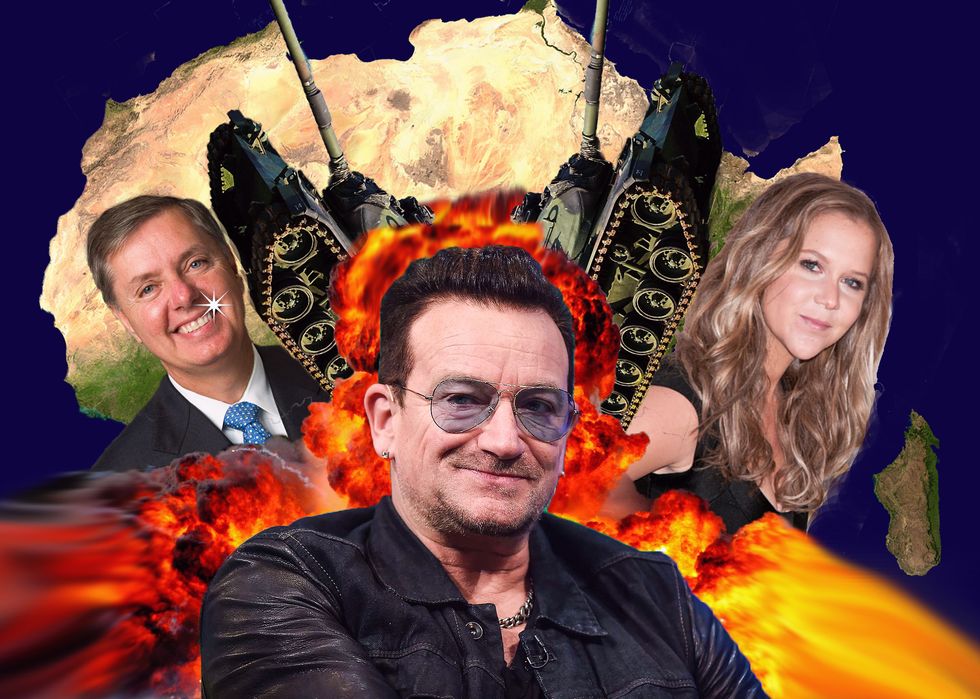 No, you clown, sending comedians to fight violent extremists does not solve anything.

Last night the Irish crooner suggested during a Senate hearing that the world should send the comedians Amy Schumer, Chris Rock and Ali G to combat violent extremism in the Middle East and Africa. The internet had a collectivefit.

“How can anyone possibly be this dumb,” most people wanted to know. Or one hopes that’s what they said. Actually, a fair amount of people, conditioned as they are by TED talks and similar contrarian dunk contests, asked if, perhaps, the clown had a point.

But Bono tends to be wrong about almost everything so it’s no surprise that he’s also wrong about this. His wrongness stems from major ideological blind spots and a warped sense of his importance in the world. If you read the transcript or, god forbid, actually watch the clip on C-Span you will be treated to a string of word vomit that conflates a grab bag of humanitarian talking points like Middle Eastern turmoil and African poverty; refugees and violent extremists; aid and trade; migration and European existentialism. All with the stated aim of trying to influence American policy on the subject. Which subject? All the subjects!

Admittedly, his press release through the One campaign does a much better job at teasing out the issues as well as the various policies he’s advocating for. But while the document saves him from complete inarticulateness on these subjects, he’s still mostly wrong.

The first and biggest of Bono’s blind spots is the belief that the West, and its client states, have no role in the creation, maintenance and/or future growth of violent extremism. America is framed purely as the savior and never the problem. Bono, like other charlatans and profiteers in the war against terror, is focused on combatting Daesh/ISIS/ISIL’s narrative.

The problem is that Bono and his kind are ideologically and monetarily (if they want to receive American funds for their programs) compelled to do this in a way that doesn’t address the biggest of so-called extremist gripes: that they live in a unipolar world where wealth flows primarily one way and bombs the other way. It’s imperialism, stupid, and if you plan on ever addressing a violent extremist, pretending it doesn’t exist will get you exactly nowhere.

Bono and his travel buddy Lindsey Graham’s supposed expertise on these matters stems from their apparent wealth of knowledge about these issues stemming from multiple trips to “the region” (the poor violent region). But while it’s true that many people’s understanding of the world expands through travel there is also a phenomenon I’ve observed, especially among rich white men, where travel, especially to the so-called "Third World," actually narrows the mind. For people like this, notions they had about poverty and culture become, through travel, deeply ingrained orthodoxies. The myopic worldviews they left home with stay just as myopic but now have a smattering of first hand details and experiences with which to buttress their ignorance.

So while Bono and Graham saw many things—orphans and refugees, poverty and squalor—because of their ideological blindness, violent extremism gets explained away as the fault of "vain young men" and brown corruption with no mention of Western complicity in all of this.

It’s fitting, then, that Bono has become so close to Lindsey Graham, a venal politician who voted for the Iraq war—a conflict that has killed hundreds of thousands of people, destabilized the region and unleashed hundreds of armed splinter groups funded and provoked by rich proxies flush with cash. These are the building blocks of ISIS. Nevermind American corruption: tax havens and the like. Nevermind the global trade in American arms and munitions. Nevermind a global system of free trade where former colonial countries stripped of their wealth and human capital are forced to “develop” without access to any of the tools which rich countries previously used (See Ha Joon Chang).

Rather than sending our best—Chris Rock—and brightest—Amy Schumer—to die at the hands of extremist groups (Who is Sacha Baron Cohen again?), we should instead offer up Bono, fresh from a week-long intensive improv class at the Upright Citizens Brigade, to go test his theory on Boko Haram. Worst case scenario is no more Bono. Best case scenario is no more Boko Haram. Either outcome seems better than the status quo.