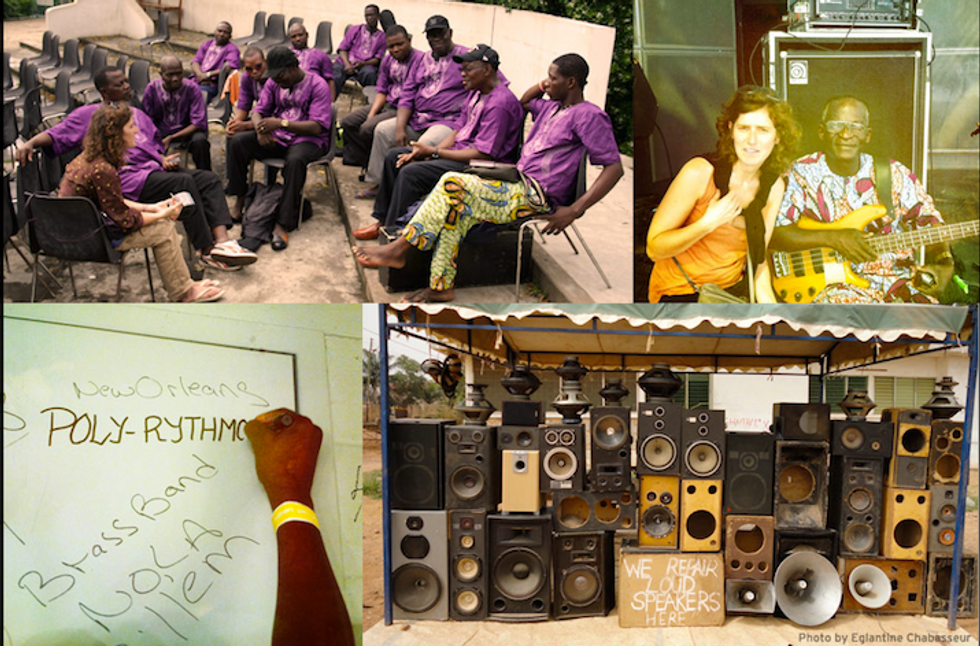 How Elodie Maillot and her label Sound'ailleurs reunited Orchestre Poly-Rythmo

Elodie Maillot is a James Bond in the world of music journalism and radio, executing her mission to produce documentaries with cleverness and finesse. She's traveled the world to sample sonic culture, produced over 200 shows for Radio France and managed to reunite one of the most popular voodoo afro-funk bands from Benin: Orchestre Poly-Rythmo.

Check out the documentation of the band’s come back in these episodes.

Orchestre Poly-Rythmo was hugely successful across Africa in the 1960s and 70s. Their music is a mix of different traditions that was accessible and appealed to people from the North, South, East or West. The sound is rooted in Sato or Sakpata rhythms, original voodoo beats and the integration of vertical drums with psychedelic guitar, sewn together with genuine funk and soul. On top of all that, the band draws from the Agoudas heritage — descendants of former Brazilian slaves who returned to West Africa at the end of the 19th century and brought with them the proto-samba songs and dances. With these layers of depth, it's no surprise the band played with Fela Kuti, Manu Dibango and Gnonnas Pedro and recorded over 500 songs. What's surprising, however, is that the band never toured outside of Africa — until Elodie Maillot.

Elodie sought out the band for an interview and ended up being the catalyst to reunite and mange them to finally have their long-awaited and well-deserved international debut. She jokes that this group of older African men put a voodoo spell on her, as she has become the manager, producer and founder of the label that would give them their second wind: Sound’ailleurs.

Sound’ailleurs translates to ‘sounds from other worlds’ or ‘they are from elsewhere.’ The mission of the independent label is to connect the dots in the constellation of great music worldwide, as well as cross-pollinate and support overlooked music. The label goes the extra step to deliver —  in addition to high quality music production — the essential and often missing element of storytelling. Along with the sounds, you get to learn about the life, culture and context of the musicians, with audio, visual, and intellectual musings to get you there. The record received a lot of love from music collectors, including Gilles Peterson who called the album “essential listening."

Sound’ailleurs has continued to grow its catalogue and do amazing projects, including workshops linking Brazilian Olodun to their West African cousins, producing a web documentray with Le Monde, crafting the Luzutopia Project to involve artists from Brazil, Portugal, Benin and create collaborations, and more. Sound’ailleurs is now bringing new talent to the USA including some amazing artists that should not be missed like Frenchman and DJ Nicolas Repac who samples his own recording of Chiekh Lo and Bonga on his album Black Box (below).

Elodie keeps the world lit to her inspirations by continuing to produce top shelf radio shows. Her new show, Radio Desert will be airing everyday from Monday August 26 through to September 1 on Radio France at 4pm Paris time/ 10am NY time. To drop in on the show and hear Elodie in her exploration of music from the Sahara, Sinai, Negev, New Mexico, Sertao, Laponia and more, head here and search Radio Desert.