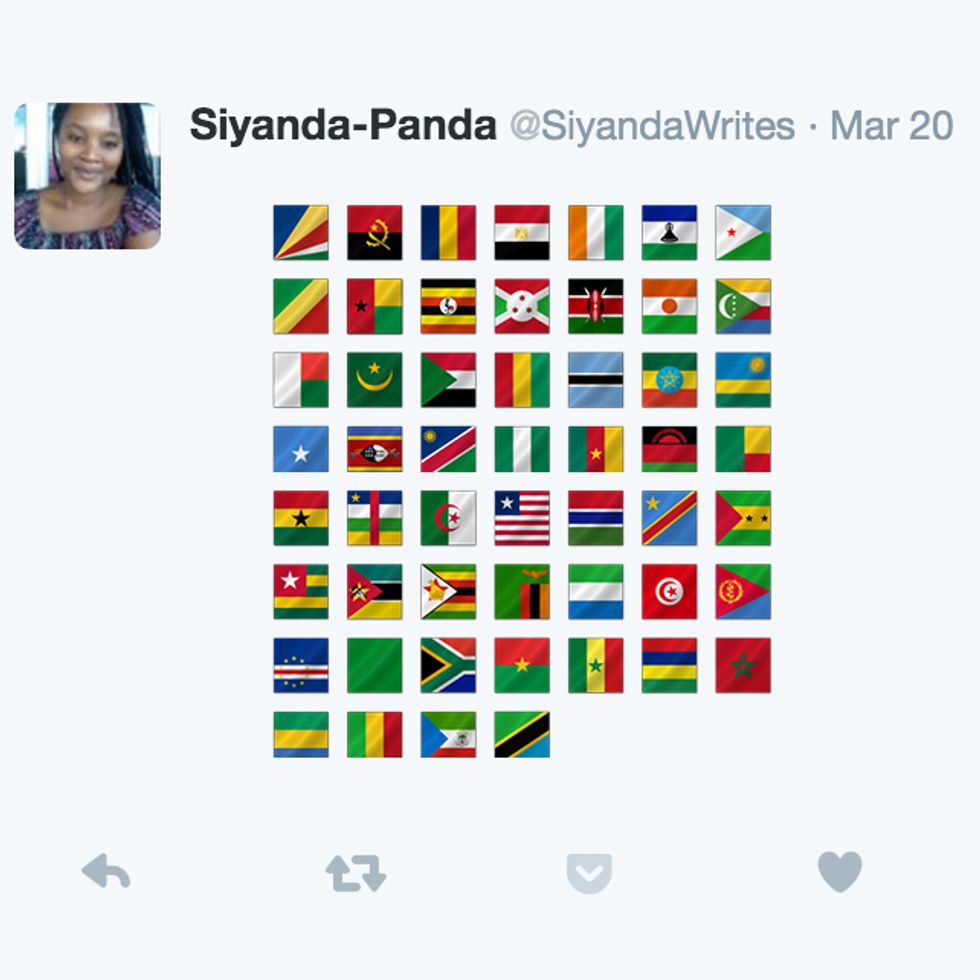 Last year I made a promise to myself to make my Twitter timeline more pan-African. To my roster of South African thought-leaders, I added Kenyan movers and shakers. And just when I thought I had mastered some of the subtleties of political thought in both these African giants, I took on the mammoth task of trying to “get” Nigerians on Twitter.

I am grateful for how immediately my foolishness became clear to me. Twitter would not be an easy thing for me anymore. First of all, I had to quickly get a feel for the different types of humour that are hits on these different parts of African Twitter. For years I had dealt in the slapstick satire of South African Twitter, comfortable in that, my natural home. Being a peculiar combination of Nguni-Sotho-speaking, the slipping in and out of vernacular was easy for me to follow.

Soon, I would add to that a quick familiarity with the Kenyan tradition of dry observation. But the addition of Nigeria threw things off a bit. Even now I have to spend a little time figuring out if the larger-than-life proclamations of Nigerian Twitter folk are indeed jokes.

Then there was the larger matter of trying to keep the names straight. Luckily the languages in South Africa, Kenya and Nigeria are so different from each other that I could at least guess relatively well what politicians were from where. But keeping all the issues straight? That would prove to be near impossible for an armchair analyst of even my years in the biz. (I am still unsure if newly-elected Buhari is a complete disaster or a gift from the gods. Nigerian Twitter’s mood swings are still a bit hard to follow—are they in anyway related to the price of oil at any given time? I’ll find out and get back to you on that.)

But there is one thing I am sure of. And that is that following random-ass people online has absolutely changed my life.

Scrolling through my timeline on my jet-lagged nights awake in Vancouver, I became suddenly intimate with the chaos of my Twitter home-page. I became so intimate in fact, that after scrolling for a few hours, the chaos seized to be chaos and the incoherence of a Timeline that hopped from the blame-game surrounding the Naira-crisis, to the outrage at education “reforms” in Kenya, to the deterioration of the #FeesMustFall campaign in South Africa, took on an almost holy glow. For a few moments in my cough-syrup-induced haze in Canada, I felt I understood the feeling of omnipresence.

So, what are the merits of following random-ass people online?

People cease to be statistics

The thing is, whether we are aware of it or not, when we read news about far-away countries, we do this thing where we let numbers stay numbers. Do you know what I mean? We allow the consequences of disasters big and small to remain as empty statistics.

But when you follow random-ass people on Twitter from Burundi, like I did before the election-crisis of 2015, when disaster strikes you are plunged into it too. Visualising, as it were, the real-life danger faced by some guy you used to have witty back-and-forths with online, the chaos of this far-away country becomes chaos on your TL, in your life. It shifts from your peripheral view to the bright, almost blinding light coming from your smartphone screen at midnight. And the people, for at least one painful moment, become people. And you are united, even briefly, in the suffering of humanity as whole. Like Buddhists, but without the robes.

I didn’t actually realize this, but I had suffered under the illusion for years, that far-away countries did things because they just did. When you read a story about some random-ass country passing some random-ass law, unless it caused you outrage, you probably flipped the page in the newspaper (or scrolled down on your Facebook feed) and thought “Well, those [insert random-ass country]-ans sure are crazy!”

But when you enter the online world, and seek out, even half-heartedly some of the more outspoken people from different countries, you begin to realize that they, like you, are varied in their support of the government or industry their countries are known for. And that for every random-ass law passed by a random-ass country, there are people from said country who are as outraged or mystified as you.

Here is an example. One would think that Nigeria’s international reputation for deep-rooted corruption was something the country just accepted as a monolith. If you, like I, were unable to think beyond statistics, to move beyond seeing a country as one big actor, you would be shocked by how many brilliant people in Nigeria were as equally flabbergasted by corruption as you are. The same goes for South Africans who for a time were often likened to the downtown thugs of their capital Johannesburg. The number of Africans who are absolutely sick of the status quo will wake you up from your unacknowledged belief that Africa is just Africa.

I am sure this applies to everywhere. I began to follow Indians online too (for some reason) and was daily confronted by the lively movements against issues that made international headlines. The stories of gang-rapes and such took on a different light. It became clear to me that there were numerous Indians who would not accept things as they were. Women’s groups and university students were raging against this war on women the way people in South Africa do, the way people in Ghana do, the way people in the Netherlands do, the way people all over the world do!

Following random-ass people online, became to me the manifestation of the teachings that all religions aim to instil in their followers -- the truth that all people are people like you: conflicted, passionate, apathetic, strong, weak, confused, brilliantly clear and people just like me.

Siyanda Mohutsiwa is a 22-year-old writer who is obsessed with Africa and the internet. In her spare time, she studies mathematics at the University of Botswana. Follow her ungovernable tweets at @siyandawrites.