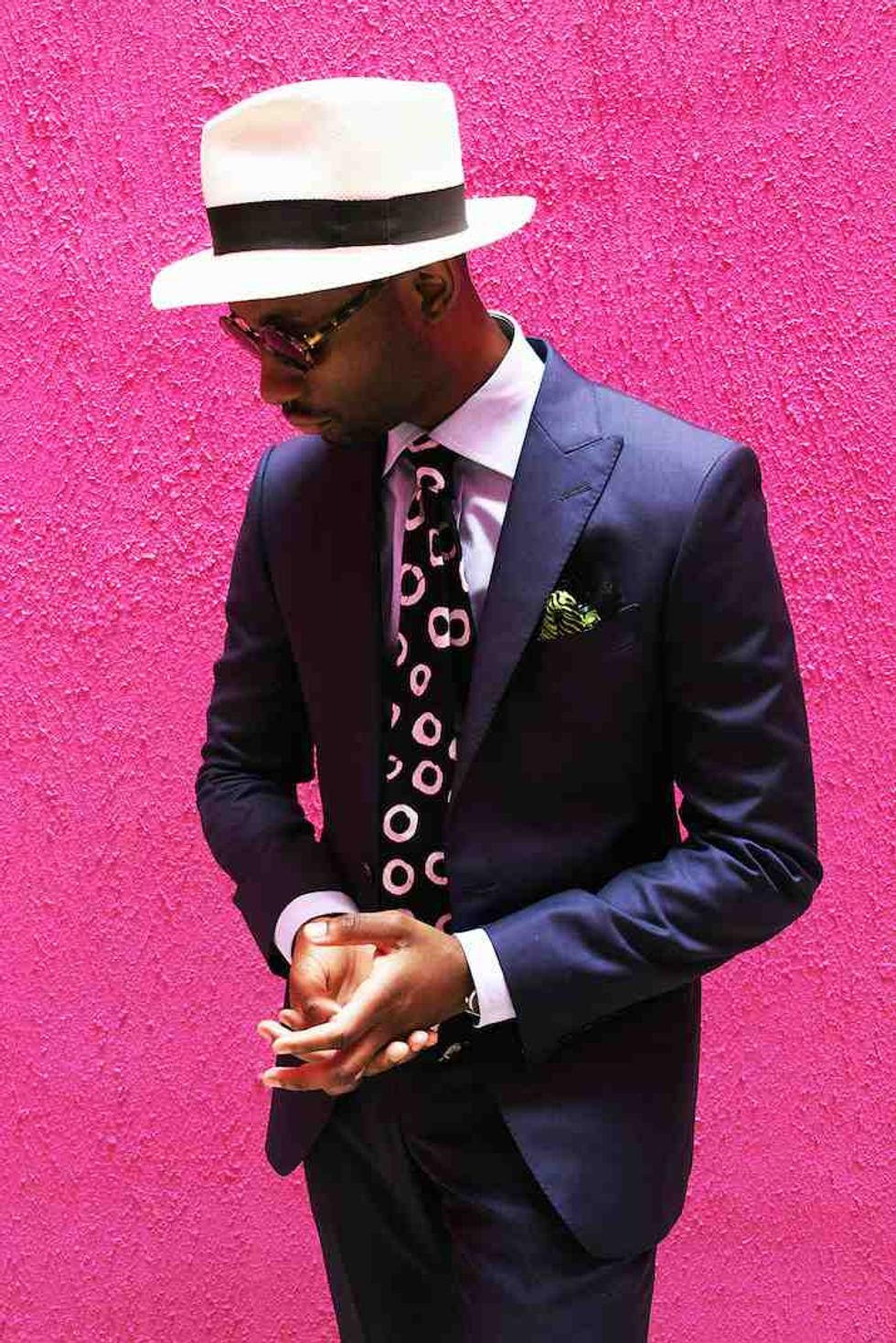 While florals for spring aren’t necessarily “groundbreaking,” something should be said for those of us able to rock print and color year round. This fall Creative Director of Post-Imperial, Niyi Okuboyejo, will be introducing scarves to his men’s accessories brand. Post-Imperial products approach cultural concepts from a modern perspective. Designed with a brave new world in mind, these pieces offer a new adaption on an old tradition. Okuboyejo’s previous Spring 2014 collection featured products treated in adire – an old dying process developed by the Yorubas in the Southwest region of Nigeria.

While recently showcasing at the MAN / WOMAN trade show in Paris, Okuboyejo was able to give us some insight as to what to expect for Fall 2014 and the evolution of the brand. “When I started Post-Imperial it was important for me to try to work with a medium that is connected to the diaspora. I decided to pick adire as a starting point because of my familiarity with it culturally. As part of the Yoruba group in Nigeria, I have a certain understanding of what it means because of the cultural connection. It allows me to approach the process with a certain level of respect. This is just the starting point, and I hope to achieve the same type of familiarity with other forms of textiles within the diaspora.”

Not to be mistaken as an "ethnic project," what sets Post-Imperial apart is the emphasis of cultural comprehension. With the rising dialogue on "African prints," the ethos of its significance has become lost. “I think that what we do is pretty amazing in the fact that the brand is a testament to the globally interconnected web that the world has become. I source fabrics from different parts of the world, dye those fabrics in Nigeria with a mix of old and new patterns, and make them in New York. Post-Imperial feels intercontinental, but not in the granola sense and we want it to stay that way. Using the selling point of how your clothing is single-handedly saving some obscure village in the middle of nowhere has always felt a little troubling to me. This is more of an exercise on how to make something so culturally sacred to the diaspora inclusive to everyone.”

Okuboyejo states that he strictly creates for tomorrow, but that doesn’t mean he neglects his clients’ needs now. When asked what inspired the introduction of scarves he explained, “It was just the next step into expanding the line. First it was pocket squares. Then came ties. And now, scarves. It was also an opportunity for me to make my very first unisex product. Many women inquired about scarves before I decided to make one… I am excited about the opportunity of having female clientele. It allows me to have a clearer vision of who I believe the Post-Imperial woman is. While working on men’s accessories allows me to solely focus on one thing in that moment, once I get that down I will be able to expand into other avenues such as a full RTW men’s and women’s line, collaborations with other brands and artists, and possibly my own factory mill where I provide exclusive prints for other entities. At the moment, the sky really is the limit. The key is not growing too fast and perfecting what I do now.”

If you're one to sport bright colors rain or shine, keep a look out for the collection this Fall. In the meantime we scoured through Okuboyejo's Tumblr and Instagram for sneak peaks of the Fall 2014 scarves in the gallery above.