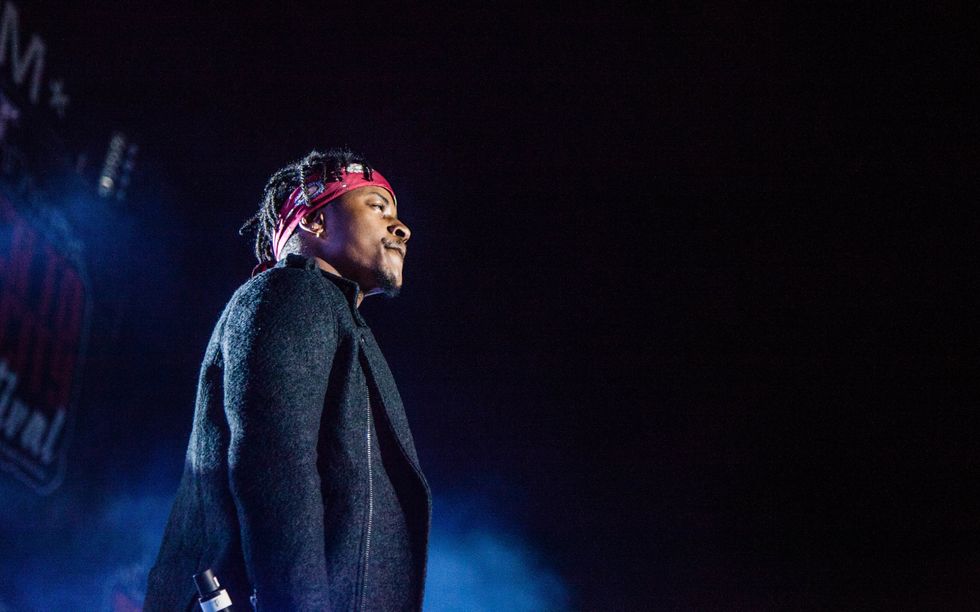 This is one hell of a story. 🤔

South African rapper Priddy Uglyis a real one. He always gives the realest answers to interviews and in his interaction with fans and fellow artists on Twitter.

In a new interview with the hosts of the podcast The Sobering, the MC, who recently released a deluxe version of his 2017 album, E.G.Y.P.T., shares a story about his relationship with fellow rapper Riky Rick.

It all began when his verse was kicked out of the video version of Frank Casino's 2016 single "Sauce." Priddy wasn't bitter about this as he assumed his longtime friend had his reasons.

"The backend of the story why they cut out the verse was politics," says Priddy during the interview.

"The Gs he (Frank) was rolling with at the time, Cut Throat, the Rikys… I'm not really cool with them, I will say it."

He added he doesn't take anything away from Riky. "I won't lie, as a family dude, he's a stand-up guy, as a musician, the energy, the aesthetic, he's Riky. But I had a more personal experience with him."

Priddy says around the time he was working on the song "In The Mood," Riky was keen on working with his producer Wichi 1080. He was then alerted by the photographer and director YeahLenzo that Riky wanted to jump on the remix of the song "OMG" from Priddy's debut EP You Don't Know Me Yet.

"I'm like, 'that shit already dropped, Wichi is already on that. I got some new shit, can I bump him some new shit?'"

"At first," says Priddy, "I didn't believe Lenzo because he was hitting me up, but Riky wasn't saying nothing. I'm like, 'yo bro, you telling me about Riky, but Riky ain't saying nothing to me.' But okay, it's all love. Eventually Riky hits me up on some, 'yo bro, I need you to come to the crib. Before that, he had started tweeting about my project, so I'm like, 'all right, shouts to Riky Rick one time.'"

Read: Why Do We Act Shocked When Rappers Live Up To Their Lyrics?

Priddy then visited Riky's crib. He took with him his frequent collaborator and producer KLY and Wichi 1080. Priddy played Riky some songs, including "02Hero" and "In The Mood." Riky was interested in "In The Mood."

"But that night got weirder," Priddy says about the time he was at King Kotini's house. "A lot of people came through. It ended up being like an audition session of some sort. I didn't really understand what was going on. We were bumpin' my music and beats, but then there were other producers who were also bumpin' their stuff. And then the Major League DJz came through, Cassper's DJ came through. And niggas were like 'bump that shit again.' And now Riky's not in the room, so I didn't really understand what was going on. But he was on the phone handling some shit, I could tell. And I was eventually like, 'this thing, I don't know, I'm cool. I'm cool with the situation, let's leave.' It was late anyway, 2am."

After two weeks, Riky hadn't contacted Priddy. "I hit him up, and he mizes me, doesn't respond to the text. I think I did a Major League Gardens the week after that. I see the G and he walk right past me, like we didn't know each other. And I'm like, 'oh okay.'"

Priddy says he hollered at Riky one last time, to ask if he was still keen on the song, after all he was the one who showed interested. Crickets.

"Next thing I know," says the rapper, "he's hitting KLY up, they shooting the "Too Much" video, I'm not invited [to the shoot]. That was mine and KLY's joint actually. But it's cool, they removed my verse and I wasn't' trippin.'"

"They pushed that joint. When the joint dropped. I think Riky met Frank through KLY, because KLY was doing 5AM in the East." Priddy continues. "He wanted to sign KLY, but Maphorisa was also in the picture, and I know that caused a feud now, like, 'who you with now?' You with them or me type situation. And then Wizkid went and shot another video with KLY. He paid for the video and everything. That was like a problem with Riky's camp, like, 'are you with me or with them niggas?' From what I know, 'Too Much' wasn't getting pushed by Riky neither. And I will say this upfront, and he knows it, too, like, 'yo we shot this video, [but] Riky's not tweeting about it.' Nothing."

This was around the same time Riky Rick became close to Frank Casino, and jumped on the remix to his single "Whole Thang."

"Frank was his homie now," adds Priddy. "But we saw it as what it was, he's pushing Frank, no hate to Frank. I guess what he wanted to do with me, he ended up doing with KLY, it didn't work out with KLY, then he ended up doing it with Frank. They did their thing, yeah man, they really ran the decisions behind a lot of Frank's move then."

"And me and Frank also had special conversations like, 'your niggas don't fuck with me, I don't know what it is.' And he also didn't know what it is. He's like, 'it's kinda weird bro, but it's also love, but I still want you to be in the video, though.'"

"At the time I had heard I wasn't gonna be on the song no more, they weren't shooting the video with my verse on it, it was Riky's decision. He can come out and say something else, but this is what I heard. So I was like, 'all right,' and ever since then me and Riky hadn't been cool. I saw that because when I see him it's like yo, 'I was the nigga that you invited the crib once upon a time, now it's like when I come greet you, it's like heita.'"

In the same interview, Priddy Ugly talks about why he left Ambitiouz Entertainment, and how he still owns the music he made under the label. Artists such as B3nchMarQ, A-Reece and Fifi Cooper left the label last year, and they don't own the music they made while still signed to the label.

Priddy Ugly also talks about how Speedy wanted to sign him, how Frank Casino put him on, among other interesting stories.

Listen to the interview below and stream Priddy Ugly's latest release E.G.Y.P.T DLX underneath. Be sure to subscribe to The Soberingif you are interested in in-depth interviews with South African hip-hop artists.