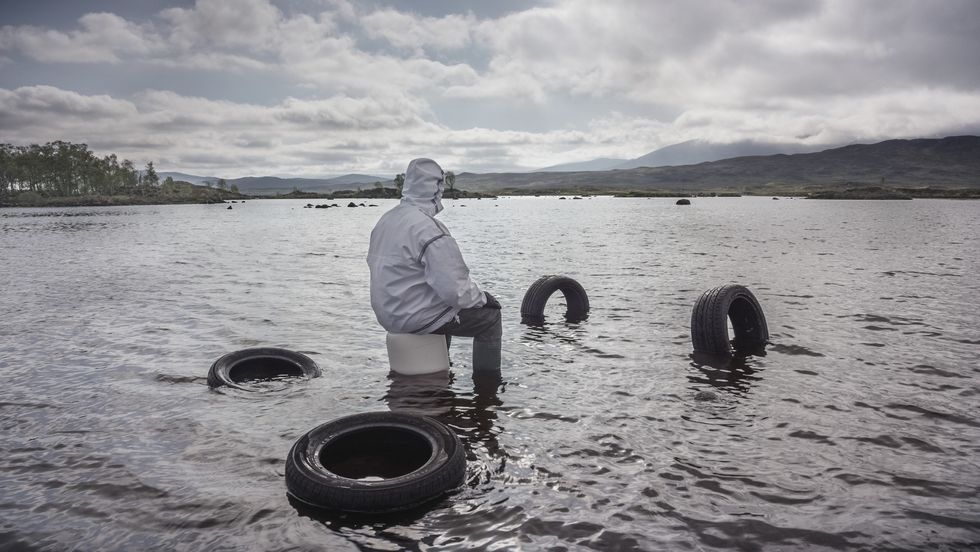 Purple is John Akomfrah's ambitious rendering of the effects of climate change and a special commissioned by the UK's Barbican gallery. The Ghanaian-born, London-based filmmaker has created a six channel video installation, each one laced to the next, for which he combined myriad archival footage with newer ones, harmonised by a sweeping orchestral score.

Akomfrah's previous work, Vertigo Sea (2015), was a three screen installation which addressed the industry of whaling but also the role of the sea in migration and slavery. The film is part of Akomfrah's substantial and weighty body of work that includes "Auto Da Fe" (2009) for which he was awarded the Artes Mundi prize for 2017, the international award for visual artists held every year in Cardiff, UK.

Purple addresses the anthropocene, the geological time period characterised by human influence on the planet that has led to mass extinction of plant and animal life, rising sea levels and changing weather patterns. The Anthropocene is itself a modification of the Holocene which covers the entirety of human presence on earth, and, unlike the former, is formally recognised by the International Union of Geological Sciences (IUGS).

Purple runs to a full hour and consists of six parts each of which is prefaced with evocative titles - "Into The Petrified Waters", "The Toxic Body and a Love Story", "The Liquid Spirit of Things", "The Alien in the Body", "Oh Earth What Changes Hast Thou Seen" and "The Winter of Our Discontents" —a structure which makes digestible a subject of such scale and importance its total impact on the planet still beggars belief.

Akomfrah has chosen a pointillist approach to make "Purple", using film clips lasting mere seconds and from disparate sources, from a television assembly plant to Greenpeace activism, from swarming locusts to those of the great Ghanaian leader Kwame Nkrumah on official engagement, all of which the viewer is encouraged to accept as a seamless whole by sweeping orchestral arrangements.

Akomfrah does not present authoritative scientific facts on the ecological destruction of climate change, or anything by way of an argument on what an appropriate response ought to be.

If "Purple" was not primarily designed to be a sensory experience, it succeeds well enough as one - helped by active recollection from the different memories and thoughts each image and their sum total bring to the fore.

Watching the film could also be a cerebral experience depending on the viewer's prior knowledge of the discourse around climate change, and familiarity of experimental filmmaking.

The most obvious framing device Akomfrah has deployed is the depiction of the human life cycle using shots of babies at the moment of birth and laterly shots of a cemetery (with blooming purple flowers).

The title "Purple" was chosen for its artificial nature, being a combination of red and blue, both natural colours. The anthropocene is believed to be artificial because it is "man-induced" and not an accident of nature.

The easy reasoning crystallizes a gargantuan concern which required clever film making inventions from Akomfrah to have /be rendered past the heart and intellect, and aimed for the senses and the existential.

Purple is showing until January 7th at London's Barbican gallery.