A Talk With Quantic Ahead Of His 45 RPM D.C. Show w/ Sinkane 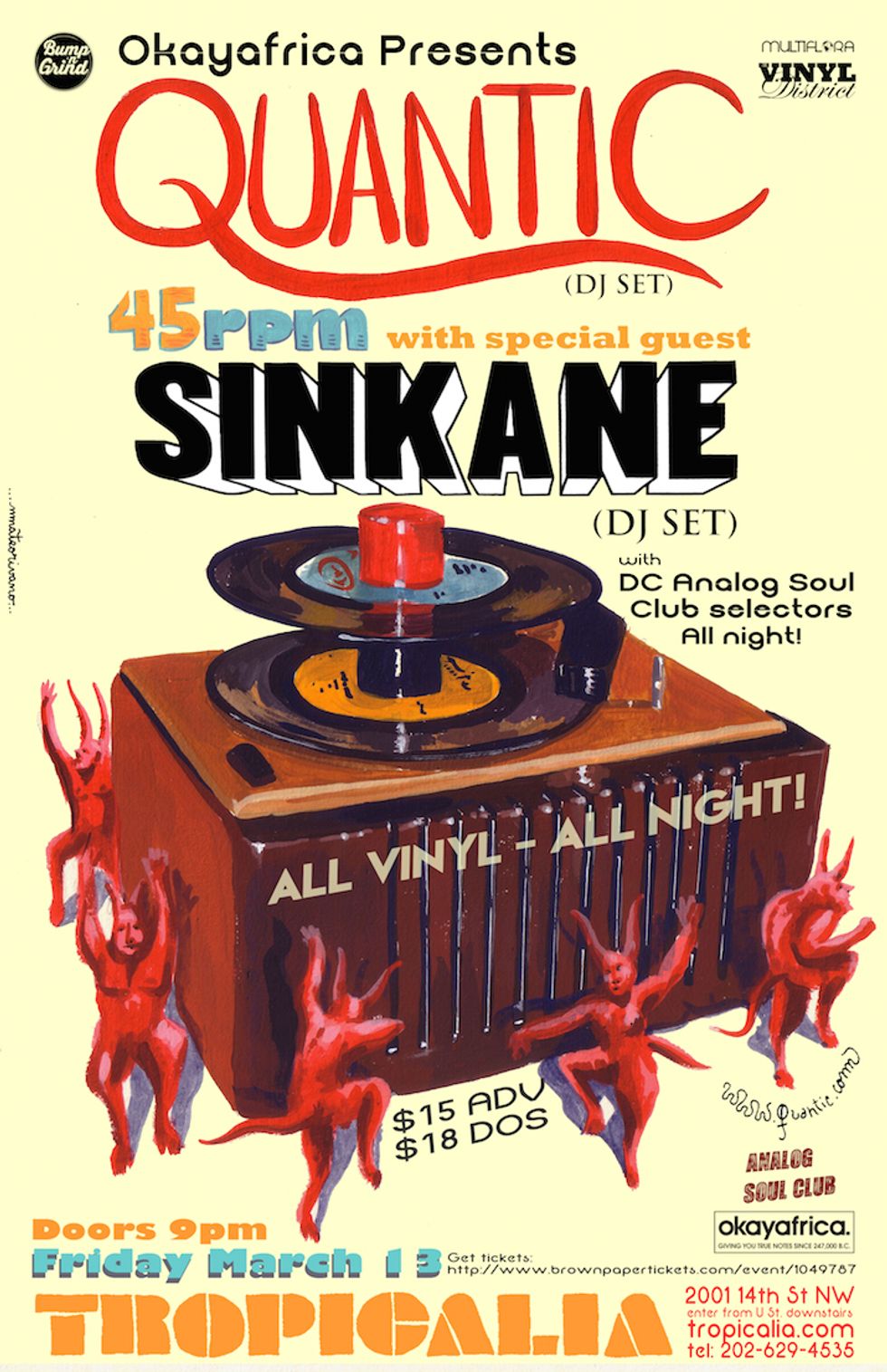 Quantic will be playing an all 45 RPM DJ Set alongside Sinkane on March 13 at Washington, DC's Tropicalia venue.

Producer and selector Will Holland aka Quantic is embarking on a month-long North American tour dedicated to the 45 RPM record. The 18-city tour will see Quantic DJing his transatlantic blend of tropical-soul sounds from Africa, Latin American and the Caribbean, as showcased in last year's Magnetica LP. For his Washington, DC stop at Tropicalia, the producer will be joined by Sudanese/BK songwriter Sinkane and DC Analog Soul Club selectors.  See all the info on the March 13 show in the flyer above. We chat with Quantic about his love of the record single and his favorite African 45s below, as well as revisit this Okayplayer TV apartment visit.

Quantic: By its design the 45 is a very compact, portable format but you can squeeze a lot into it. As most 45s don't have covers it's down to the music to do the talking, a no frills approach to music marketing. From a product life standpoint, for many of the used 45s I own, I'm the third, fourth, maybe fifth owner so they last a long time too. In short, the 45 is a quicker hit, a cut to the chase, a refinement, you pick your best songs and run with it.

OKA: What makes it so suited for the dance floor?

Q: In theory, the faster the record spins, the higher the audio quality produced. The humble 78rpm disc, though now extinct from clubland, would arguably make a better club format, but since most club record players only play 33 and 45 that's not possible. This makes 45s the next best thing, easier to carry too! On a sidenote, I think it's increasingly important in shows to visually show people that you are presenting music to them in a live way. I often see sets where I really have no idea what is going on behind the illuminated Apple display. That doesn't mean that I'm against the use of a laptop, most of the music I play was made with one, but I guess it's about being more connected to the audience.

OKA: Tell us more about this limited edition 45 you've put together for the tour. What's the recording on it?

Q: On my last Magnetica tour we sold a 5" sized clear vinyl of a song called "El Yage," it was only available at our shows and it sold quick! This time around we are doing a special run of clear vinyl 45 hand cut by The Carvery in London. The song itself is a dancefloor cut I made especially for the tour and it won't be available elsewhere for now.

OKA: Lastly, what are some of your favorite African 45s in your collection?