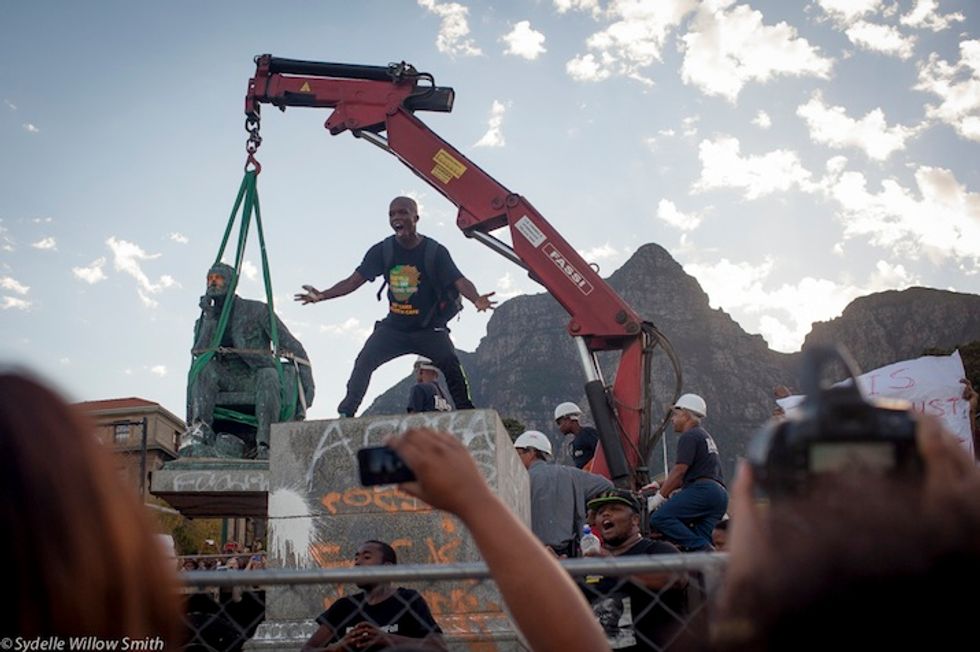 On April 9, 2015, students gathered at a mass meeting at the University of Cape Town to see the statue of British colonialist Cecil Rhodes finally fall.

Today, after a month of demonstrations, the statue of British colonialist Cecil Rhodes was removed from the University of Cape Town. The statue, which was unveiled in 1934 and sits atop UCT's rugby fields and leads to the university's iconic Jammie steps– became the focus of protests and a countrywide movement after 30-year-old political science student Chumani Maxwele threw human excrement on the monument in a call for it to be taken down. "As black students we are disgusted by the fact that this statue still stands here today as it is a symbol of white supremacy," Maxwele told the Cape Argus. "How we can be living in a time of transformation when this statue still stands and our hall is named after (Leander Starr) Jameson, who was a brutal lieutenant under Rhodes?"

Earlier this week the student-mobilized Rhodes Must Fall Movement called for a mass meeting to take place on April 9. "The statue is only a single object that represents the colonial narrative of South Africa," the movement's Media & Communications Team wrote in a letter. "Its removal thus represents the narrative of decolonisation that has begun in our country." The meeting, they said, is about joint struggles against oppression. "Oppression in all it's intersecting forms: racially, economically, physically, sexually, geographically, politically and epistemologically," they wrote. A day prior to the meeting, UCT's Council voted in favor of removing the statue.

On Thursday, large crowds gathered at UCT's upper campus to see Rhodes finally fall. South Africa/UK-based photographer/filmmaker/researcher Sydelle Willow Smith was on the ground to document the mass meeting. She told us over email:

"This movement is heavily steeped in the need for decolonization and the need for black voices to be heard so I dont want to write too much as a white South African it is now the time for me to speak less and listen more.

I can only speak from where I stand. South Africa's wealth remains in the hands of a few mostly predominately white hands who have not had to do much to shift their approach or position in the so called New South Africa thus a statue that symbolises that oppression must fall in order to serve as the beginning of transformation at one of the top Universities in Africa that is Eurocentric in its knowledge production, its attitude and the symbols it holds up and memorializes. This fight these Rhodes Must Fall students have begun is incredible and must flow out into greater society because we cannot continue to sit in our mansions and positions of comfort in one of the most unequal countries in the world . Something has to give. History is part of that process and these students are writing it."

See photos from the mass meeting, shot by Sydelle Willow Smith, in the gallery above. What follows below is a full statement read prior to the removal of the statue.

The Rhodes Must Fall statement read out at the mass meeting and prior to the removal of the statue:

Exactly a month ago, the pain of one black student led to an action that implicated the university community and South African society as a whole; an action that called into question the neo-colonial situation and the rainbow nation mythology that is suffocating our country. The pain of a single black student, and the pain of millions of black South Africans has now culminated into the movement known as Rhodes Must Fall.

In the time we’ve spent at Azania House we have begun to understand the need for a new language that challenges the pacifying logic of liberalism. This logic presents itself to us in these ideas of ‘reform’ and ‘transformation’, which are legitimised by the Constitution- a document which violently preserves the status quo. Transformation is the maintenance and perpetuation of oppression, hidden within meaningless surface-level change. We have recognised that what is needed instead is the radical decolonisation of this institution, which is necessarily linked to the black condition both nationally and internationally. Our existence as black people is defined by a violent system of power. The university’s processes and language naturalises that colonial system. Therefore, if we wish to get rid of that system of power, we have to destroy the processes altogether. Decolonisation is this very destruction.

We have realised that the systems of exploitation which confront oppressed people at this institution cannot be tackled internally, precisely because they are rooted in the world at large. Black bodies, female bodies, gender non-conforming bodies, disabled bodies cannot become liberated inside of UCT whilst the world outside still treats them as sub-human. The decolonization of this institution is thus fundamentally linked to the decolonization of our entire society. Therefore when we say Rhodes Must Fall we mean that patriarchy must fall, that white supremacy must fall, that all systematic oppression based on any power relations of difference must be destroyed at all costs. These are battles that we cannot fight alone.

The removal of the statue by management is not something we should be grateful for. Management has undermined and antagonised us throughout this process. They described Chumani’s protest action as reprehensible, they insist on defending Rhodes’ legacy, and they have made it clear that they think that black pain is debatable. Last night, we stormed a meeting of Council and refused to leave, declaring that no decisions could be taken about us, without us. After insisting for an hour that the laws forbid a decision to be taken in the presence of uninvited visitors, management eventually realised that we were not going anywhere and promptly chose to make the decision in our presence. The fact that Council was able to contradict the same rules that they had just tried to use to exclude us, illustrates both their hypocrisy and the effectiveness of our radical tactics of engagement only on our own terms without compromise.

We must at no point forget that management are our colonial administrators, and their removal of the statue is merely an attempt to placate us and be perceived as sympathetic. Our freedom cannot be given to us- we must take it. We want to be clear that our only regret is that we did not take the statue down ourselves. Going forward, we will no longer compromise. Management is our enemy.

The next step to be taken by our movement is a three pronged approach, based on workers, academics and students. Firstly, we will be launching a campaign against the unjust exploitative system of outsourcing, used by UCT to cut costs and shirk responsibility at the expense of workers’ lives. Secondly, we will be launching a campaign around the financial and academic exclusion of black students. Thirdly, we will be focusing on the underrepresentation of black academics, which goes hand-in-hand with our continuing research into the development of a decolonised curriculum.

Finally, let it be known that Azania House is ours, and we will not leave.