You Are Going to Love Riky Rick’s ‘Stay Shining’ EP 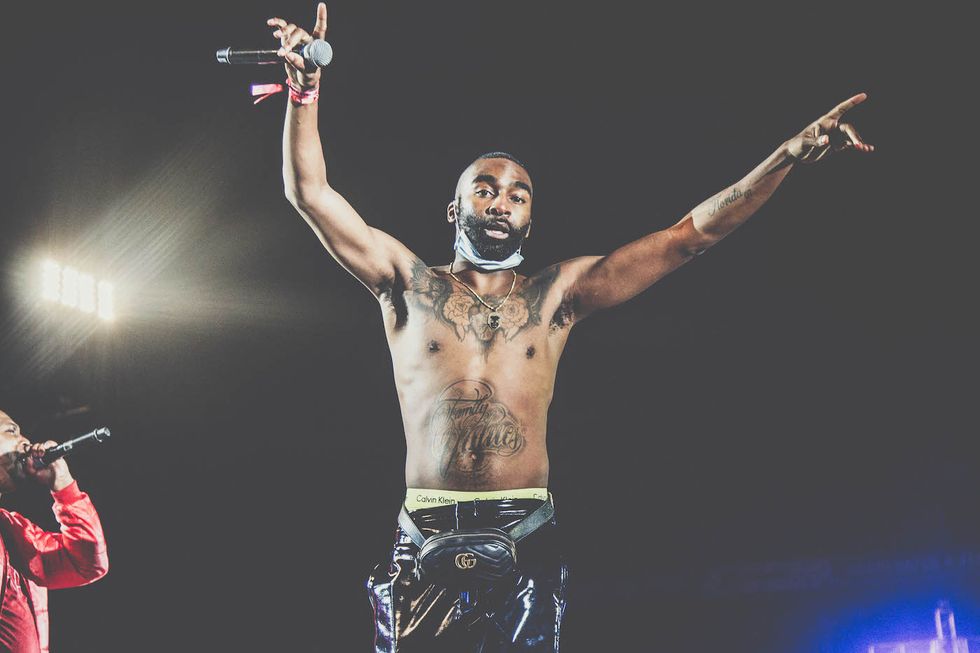 Riky Rick bares his soul while making you dance on his latest EP, 'Stay Shining.'

South African rapper Riky Rick loves you, and he wants you to be your best. But he's also not shy to remind you that he dresses better than you.

On his latest EP, Stay ShiningStay Shining, King Kotini opens up about seriously personal issues, like missing his private life which celebrity has stripped him of. He raps on "Joy," the opening song after the ominous "Jordans Intro":

"I had a dream about last night/ I'm really missing my past life/ Ain't got no love for the fast life/ I remember walking in the mall without people begging for pictures/ Baby mama mad 'cause I'm travelling over Christmas/ the other day, my son called me by my stage name/ I thought it was funny, it took a moment for me to think about it and understand what it means."

"Joy" is an oxymoron because the instrumental, which has kwaito and bubblegum influences tells you to hit the dancefloor, yet Riky pours is heart out, it's so hard to dance.

The song is microcosm of most of the project, as Riky tells his story, holding very little back, over music that induces happiness with catchy rhythms and hard-hitting 808s.

To prove that Stay Shining isn't just a collection of random songs, Riky's guests drop fitting verses. A-Reece on "Pick You Up," gives us a glimpse into a tumultuous time from his recent past, recording his debut album Paradise. He raps, "Funny thing about this whole shit, making Paradise was a living hell/ I don't even have a clue how the album did , but I know I'm doing well," over reserved synths and a big bass line.

Nasty C reflects on fake friends, his place in the industry and shares some advice from his father ("I reconciled over my father over some good food/ He told me nothing could travel slower than good news") on the Tshego-assisted "Vapors."

That's before Riky gives us yet another extremely personal account of his glamorous life, regretting missing his mother's birthday and looking richer than he actually is:

"I thought life is easy after you blow up
I guess life is harder when you grow up
I'm stressed out, I'm thinking about what to do
When I started rapping, it wasn't about the moves
It was about copping sneakers and macking honeys
Now it's all about hype and making money
And plus I got the text man tryna take it from me
I'll probably never make a real million in this country
I know a lot of rappers who bubbling in the hood
I'm in a nice house, they struggling in the hood
So when they see me shining, they thinking I'm good"

On Stay Shining, Riky is introspecting when he isn't telling you he dresses better than you—which is highly likely to be true. After gracing the cover of GQ Fashion earlier this year, hanging out with A$AP Rocky and rocking Gucci like it ain't a thing, the rapper is the trendiest among his counterparts. And we are totally here for it.

Songs like "Stay Shining," "Buy It Out," and "Buy It Out Remix," see the man loosen up a bit and celebrate himself. While "Murdah" is a love song that, sonically, fuses afrobeats and dancehall by way of Davido and Gemini Major.

On "Buy It Out Remix," Riky enlists an array of fellow fashion killer rappers: J Molley, Frank Casino, KLY, Stilo Magolide, YoungstaCPT, Frank Casino, and the father of South African new school rapDa L.E.S (Riky introduces him as "the OG of this swag shit," which is an undisputed fact). We are seeing few and fewer posse tracks in South African rap, and Riky just gave us one to debate over who had the best verse.

Stay Shining is a balanced body of work that shows us different sides of Riky Rick, just like his 2015 debut album Family Values did. And he keeps the music interesting and varied without trying too hard.

Listen to Stay Shining below, and buy it on iTunes.