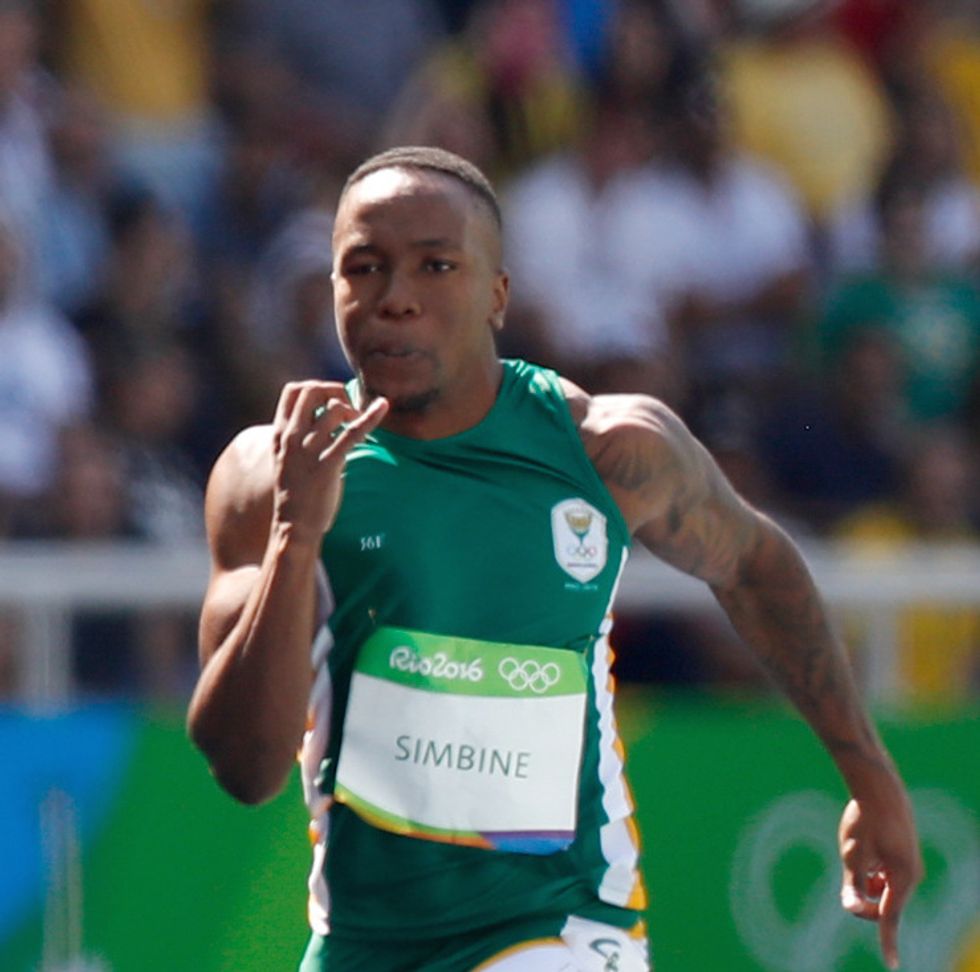 South African sprinter Akani Simbine may not have medaled, but his performance in the men’s 100m final should be celebrated nonetheless.

Today, as we all know, belongs to Wayde van Niekerk, the 24-year-old sprinter from Cape Town who won South Africa their first gold medal of the Rio Olympic Games and smashed Michael Johnson’s 17-year 400m world record in the process. But van Niekerk wasn’t the only South African sprinter to make history Sunday in Rio.

Akani Simbine may not have medaled in the men’s 100m final on Sunday, but his performance should be celebrated nonetheless.

The 22-year-old from Kempton Park, Johannesburg, ran a phenomenal race and proved he can hold his own against the world’s fastest men. In his Olympics debut, the current holder of South Africa’s 100m record came in fifth with a time of 9.94 seconds. He was just .01 shy of Jamaica’s Yohan Blake in fourth and .03 off of Canada’s Andre De Grasse in third. Jamaican favourite Usain Bolt led the way with his third-straight 100m gold, followed by America’s Justin Gatlin in second.

Lining up to the final was a historic feat in itself. According to reports, Simbine is the first South African man to make it to the final of the 100m event since Danie Joubert in 1932.

“What a time to be South African! You have done justice to the green and gold,” tweeted former sprinter and coach Geraldine Pillay of van Niekerk and Simbine’s performances.

“The day belongs to @WaydeDreamer - but congratulations to @AkaniSimbine who was also brilliant in the 100m final,” said presenter and personality Maps Maponyane.

Hip Hop Pantsulatweeted “Props to Simbine for HOLDING HIS OWN and keeping up with the wolves.”

DJ Freshsent props too. "Ran alongside titans and held his own!!!" he said.

Looking ahead to the 2017 IAAF World Championships in London, Simbine is certainly one to watch.

What a time to be South African! You have done justice to the green and gold @WaydeDreamer@AkaniSimbinepic.twitter.com/8EBtVfqMoR

Slow clap for Akani Simbine too. Tough race against legends, still managed to finish under 10 seconds. IN THE TOP 5. pic.twitter.com/GsRT2drOHo

Let's not forget @AkaniSimbine, what a race he ran #Rio2016

Props to Simbine for HOLDING HIS OWN and keeping up with the wolves...?????

The day belongs to @WaydeDreamer - but congratulations to @AkaniSimbine who was also brilliant in the 100m final. ?? pic.twitter.com/BiQWzei6dT

Great race by @AkaniSimbine 5th in the 100m final at Olympics what an achievement! #proudlysa@adidasZA@Rio2016_enpic.twitter.com/FdDfbPOBYv

MAD props to @AkaniSimbine ... Ran alongside Titans and held his own!!! #RioOlympics2016pic.twitter.com/sxNKdcm0Pv

#RSA#Champ@AkaniSimbine must be proud of himself. Getting into a 100m #Olympics Final sprint is no easy feat. Well Done Brother.