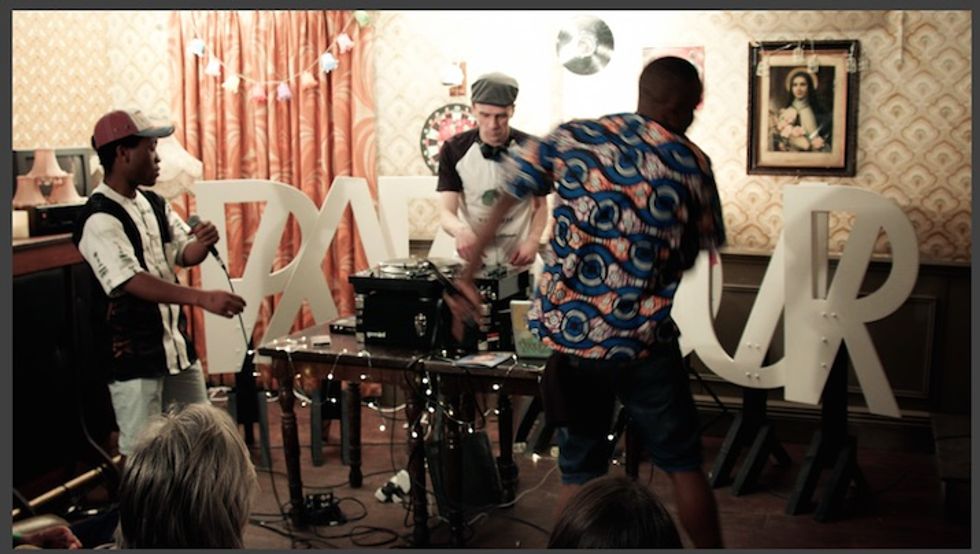 Rusangano Family is an Ireland-based hip-hop and electronic outfit made up of Togolese MC MuRli, Zimbabwean rapper God Knows and Irish producer mynameisjOhn. The trio, who've been working together for the past two years, deliver a potent blend of rhymes over rumbling bass and sliced-up break beats. Their recent solo and joint efforts like MuRli's Surface Tension EP and God Knows & mynameisjOhn's Rusangano / Family album have led to the group getting BBC Radio 1 airplay, as well as shows alongside Run The Jewels, Young Fathers, Snoop Dogg and BadBadNotGood.

Rusangano Family's latest single "Wasteman" features swift vocal deliveries from MuRli and God Knows over mynameisjOhn's frenzied, guitar-sampling beatwork. In an e-mail to Okayafrica, the group expanded on the track's meaning: "Ethics. Right versus wrong. Good versus evil. Morality versus sin. A universal conflict that has played on the conscience of the individual for eternity. Some argue that it is indeed the essence of the human condition. It is the foundation of all belief systems and religions, an inescapable conundrum for the entire world to face every second of every day. This antagonistic duality is a theme that is fervently explored in the arts, tackled by everyone from Aristotle to Shakespeare to Tolkien to George Lucas. And now, Rusangano Family step forward to present their philosophical insights on the matter. The condensed version is basically this — Don't be a wasteman, just be a good human."

Stream and download our premiere of Rusangano Family's "Wasteman" below and keep an eye out for an album from the trio coming soon.