The Black Indie Artist You Need to Listen to This Month: SATE 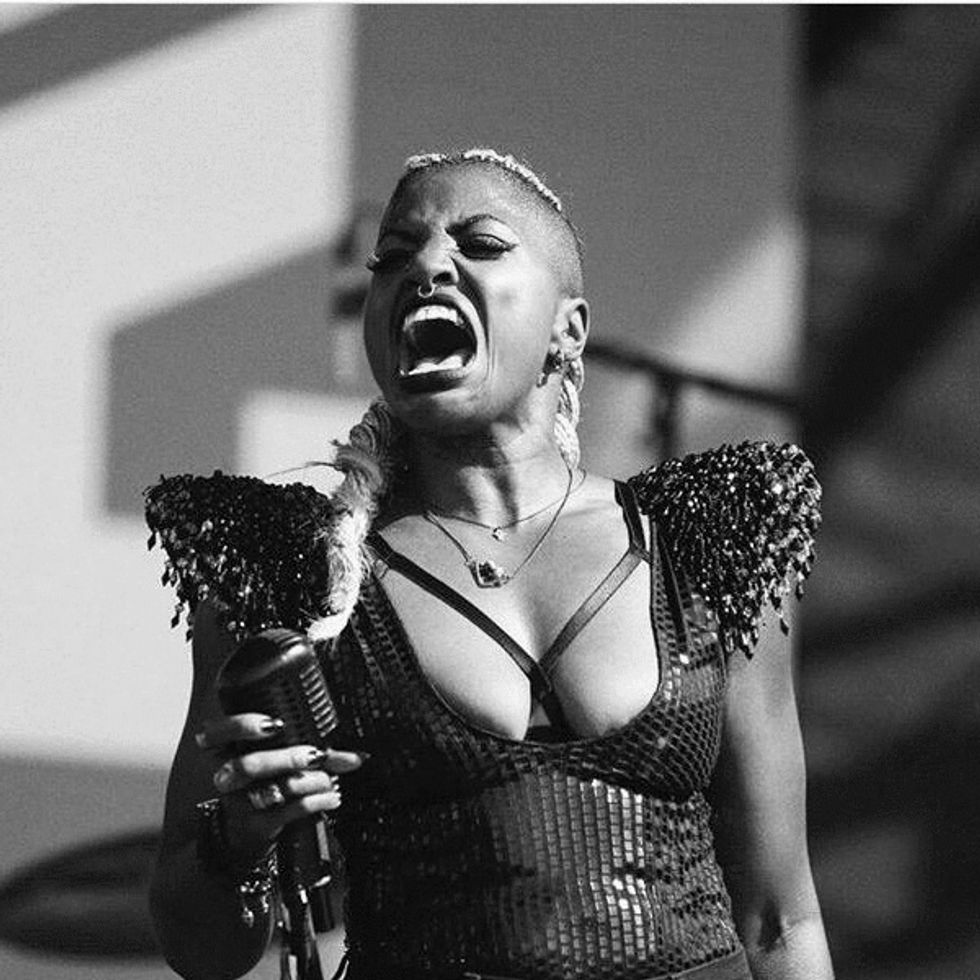 Sate. Image courtesy of the artist.

You need to hear SATE.

When she was a child, SATE's mother, the legendary jazz singer Salome Bey, used to put her on stage as soon as she could carry a tune. This is how Sate's musical career started and she hasn't stopped since.

Born Saidah Baba Talibah, the artist changed her name to SATE as a way to separate her onstage persona from the person she is in her everyday life. SATE was born out of desire to be more raw, vulnerable and confusing at the same time.

It would be unrealistic, despite her confidence and energy on stage, to believe that SATE is not affected by a lack of representation in a scene that is still overwhelmingly white and male. She recalls that every time she's on stage, "people feel the need to feel shock that I—a black woman—like and do rock music. It's funny most times, and then it's just hella frustrating."

At some point, SATE even wondered whether she truly deserved to perform as a rock act and if she really did belong to this world. Thankfully, she remembered, "the foundations and inspirations that are Chuck Berry, Muddy Waters, Big Mama Thornton... and I'm part of our ongoing legacy. So I keep walking through the fire in spite of the challenges."

The Toronto-based musician and singer's music is a savvy mix of rock and funk. Growing up, she was very much inspired by her mother and the diversity of music she'd come across while developing her own personal influences like Funkadelic, Fishbone, Living Color, Stevie Wonder and Prince.

SATE is not afraid of taking risks and being vulnerable. In her song "Mama Talk to Me," which she holds dear to her heart, she opens up about the changes in her life following her mother's decision to retire in 2011, and the pain of losing her to dementia and seeing a loved one not being themselves anymore.

"Mama Talk To Me" is featured on her first album, Red Black and Blue, released in 2016 after a PledgeMusic campaign, in which musicians use crowdfunding to raise money for their releases. The twist was that the public had a say in the songs selected, a process that SATE was completely fine with it. After all, they contributed to the piece. She even donated part of the money to a a charity dealing with alzheimer's disease and dementia.

The album's concept is divided in three parts, each one representing animals: the robin (which symbolizes renewal ), the panther (power), and the butterfly (transformation). Red Black and Blue is both SATE's birth and Saidah Baba Talibah's death, an album that starts with endings but yet, is the first of many more to come.

SATE is a artist who hates being told what she should do. She's punk in the purest sense of the world and she encourages her audience, through songs like "Warrior," to set fire what to what holds them down and take their own power back. Unsurprisingly, her songwriting process is just as free as she is: "It depends. Sometimes I'm coming in with a melody idea or I may just sit at the piano. I really let it flow, cause when it's forced it's no fun."

She's currently back to songwriting after a successful first European tour last summer where she played in the UK and France, her second home, as she calls it.

SATE is hungry. Hungry to give more of her music to the world, to empower her audience and to communicate her feelings, thoughts and experiences through her songs, to start a revolution.

What's next is her upcoming album The Fool. Eight songs have already been picked and, following the reception of her previous crowdfunding campaign, she has decided to share her recording process again by showing the whole production process on social media.