The Celestial Life of Zaki Ibrahim 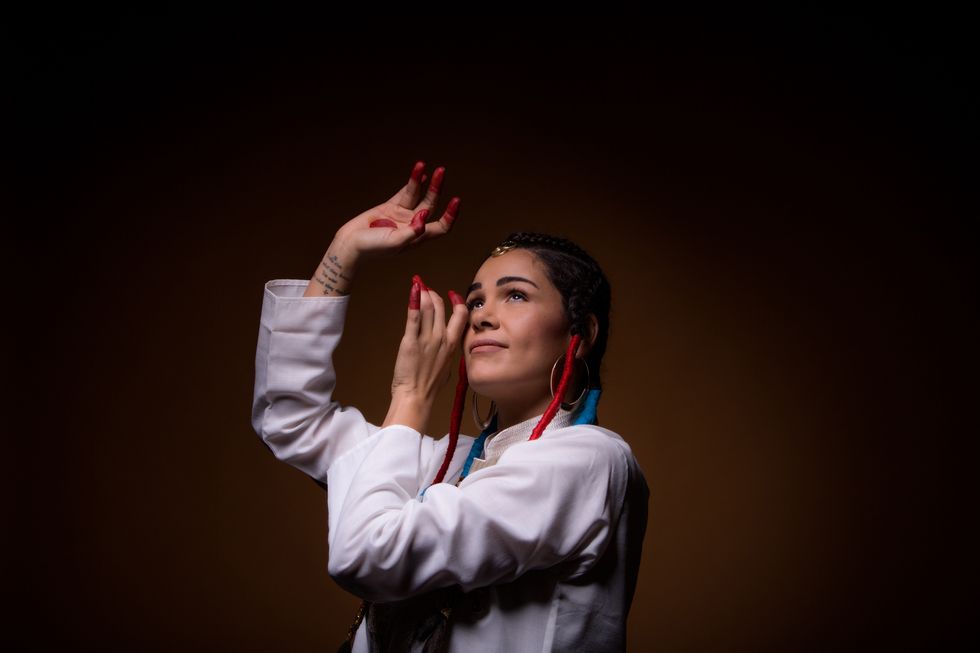 An interview with South African-Canadian singer Zaki Ibrahim on grief, family, rebirth and how "chaos is order."

Zaki Ibrahim is wearing a black and white geometric print summer dress. Her hair is braided, with pieces wrapped in red wool and beads dangling off the tips. It's a hot afternoon, and we're sitting at a cafe in the trendy Observatory neighborhood of Cape Town. The South African-Canadian singer-songwriter, mother and all-round creative is here to release her latest full length album The Secret Life of Planets.

It's almost unthinkable that she's under-the-radar for some. Born in Canada, Ibrahim was a fixture in the Toronto music scene before moving to South Africa. She released her first EP Shö (Iqra in Orange) in 2006 to wide acclaim followed by releases that span genres from hip-hop and house to soul and cosmically-inspired R&B.

It's almost six years since the release of her last full length album. Between then and now she's mourned the loss of her late father Zane Ibrahim—founder of Bush Radio one of South Africa's most popular community radio stations—and she's become a mother to her son Zayyir all the while working on projects spanning continents.

We talk about family, her upbringing and what we can expect from her in months to come.

Is it always a different shift or adjustment when you come back to South Africa?

I think so. Yeah, every time I come back I think it's a different task and a different experience. This time, I'm here partly because I'm here to release my album. I'm here with my son so that he can also see his family, so that I'm not away from him for too long and there's a sickness in my family now—on my dad's side. My late dad's baby sister who helped raise me is the one that's sick right now. Her health is deteriorating with cancer. So I'm here for my sister too, cause that's her mom.

Sounds like it's a lot to deal with in one trip?

It's a lot in one trip, but it's cool because my family is grounding as well. They remind me of who I am. They remind me of some of the philosophies or like the core values. There are certain things that I do out there and I've always been a nomad—always, always, always. But there are certain things I've stuck by and I sometimes need to be reminded why. Like, what's healthy and what's not and what comes from where. I always like to know the root of things no matter what it is. So it's good to come back and touch base even if there is drama or real challenges.

Do you connect more with your dad's side of the family?

Yes. When my dad left South Africa in the early 70s, he felt the need to create his own culture in a way. He sought spirituality, he sought redefining the scope of what it means to be black. It's not one dimensional. It's not the American black. It's not the South African black. It's everything in between. Him and my mom kind of just created their own thing. I think their intention for us was to create a sanctuary to be able to cultivate free thinkers and to create a space to counteract a lot of the stuff they went through.

Why was it so important for them to create a sanctuary ?

My mom comes from a police family—a White Anglo Saxon Protestant and Scottish Police family. I never knew them unfortunately. I met them. By then there was a lot of guilt and stuff and I don't actually like to speak about it often because it hurts my mom. She had to lose that, it's a lot of heartbreak for her. But for me it's a very real thing to be rejected by family.

How did you experience this rejection?

So it wasn't like "Zaki, you suck." My mom had disobeyed and gone outside of what was expected. It's a police family—they're heavy Masons, my grandfather was the Chief Superintendent, the head of the Police department and in charge of three different cities, really high level. So it was really traumatic for my mom; she was cut off because she had married and had children with a black man and at the time that was like the only wrong thing to do.

I've read a lot of earlier interviews on your earlier works where there are questions relating to your identity and your "refusal" to label your music. Is that partly because you identify with your dad's heritage quite strongly and at the same time you have this nomadic lifestyle?

No. I realise that in a lot of the interviews it's like "The genre-bending, no box, no-genre-having-artist." Honestly I don't know. I actually don't fucking know what to say genre wise. I'm not a marketing cat. If someone's like "what kind of style do you have?" I'm not going to be like, "well it's kinda Bohemian chic and a little bit of urban." I actually don't know and that's been the case for a long time. I have many influences. I am nomadic. I don't think there's a need to categorise my music.

I noticed you removed all your older pictures off instagram. As an artist do you feel like you need to immerse yourself in the "big bad marketing world?"

Sometimes marketing can be art too because you're delivering a message and you're finding interesting ways to connect to an audience, that can be artistry too. But I also wonder where the purpose is in all of that. If there isn't any purpose it's just depressing. There's gotta be balance in the world right?

So can you tell me a bit about your latest album The Secret Life of Planets what was the thinking there?

The themes around the album focus on meeting versions of yourself over and over again, within lifetimes. And the idea that time is not necessarily linear; there are a lot of theories around it. There are spiral timelines and overlapping timelines which sometimes explains the presence of ghosts, time travel and sci-fi references.

What I do like to do when I create is becoming and creating characters and it's very much based on my interpretation of reality. We emit tones and vibrations as do planets, so we are planets in a way. Everything reacts off of each other in a way. During the making of this album I was imagining myself as this celestial body in a way; bumping and feeling and being really sensitive in a way.

What's next for Zaki?

I'll be living in Ethiopia for a few months to work on a full length album with an Ethiopian filmmaker. The other project I've started working on is an album in the form of a sci-fi documentary film. It's been a fascination for a while. The film looks at this idea of migration and genealogy; the influence of Africa on the world and how Africa and Asia overlap in terms of the food, the cultures, the spirituality and even the magnetic points on the globe.

And quickly, what's it been like to be a mom?

It's amazing; it's the biggest test of fucking humanity. Being a mom is hard. I don't know, it's not quite blissful because the challenges are real and I'm constantly being tested.