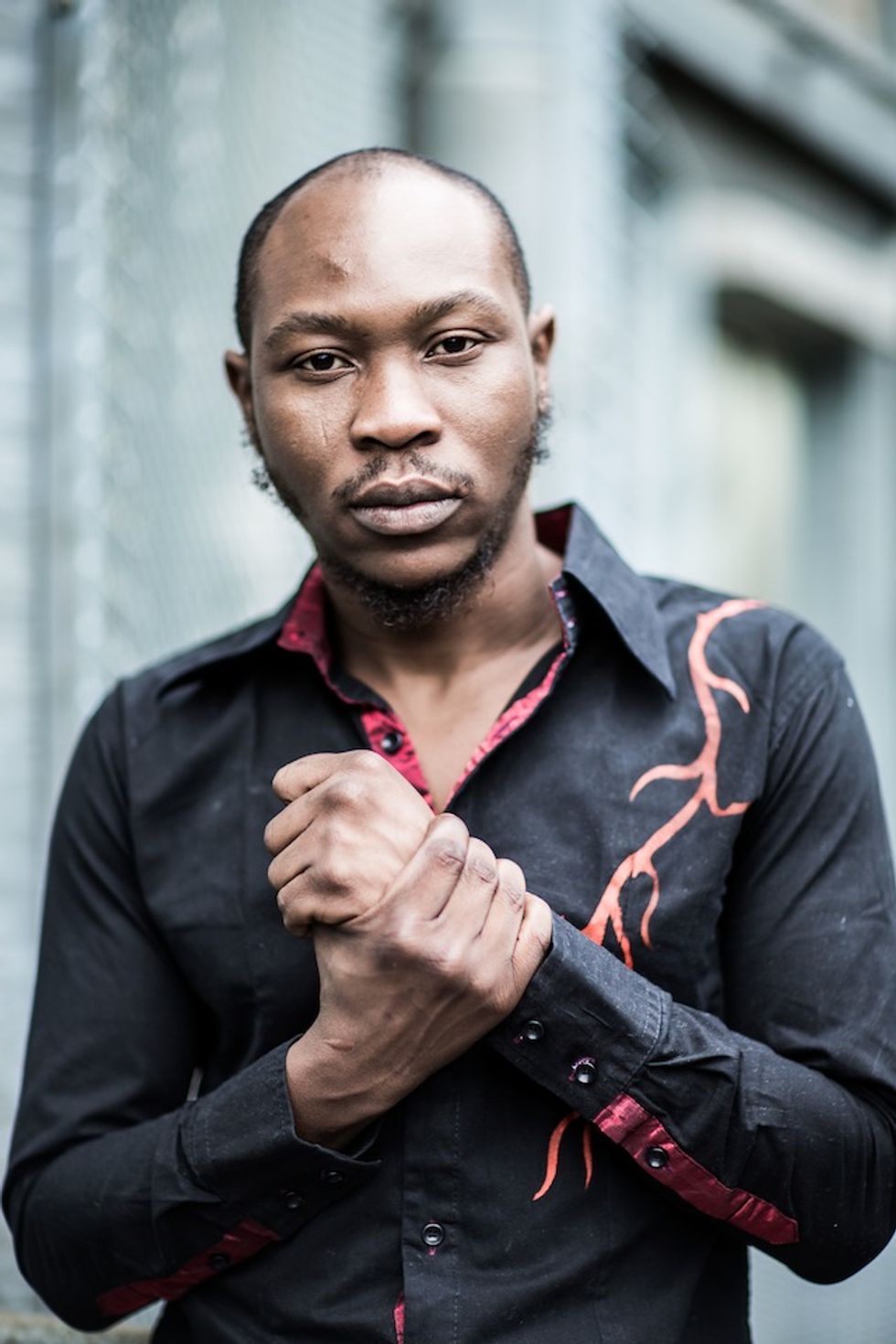 Seun Kuti talks his new album 'A Long Way To The Beginning' in an Okayafrica interview.

Last month Seun Kuti & Egypt 80 released their highly-anticipated third studio album. Co-produced by 'Black Radio' virtuoso Robert Glasper, 'A Long Way To The Beginning' is a relentless 7-track excursion into horns, drums and call and response. Glasper’s keyboard appears on several tracks, with additional collaborations coming in from M-1 of Dead Prez (“IMF”), Nigerian songstress Nneka (“Black Woman”), and Ghana's Blitz the Ambassador (“African Smoke”). This week the band kicked off their U.S. summer tour with a high energy performance (and a special surprise appearance from Glasper) at New York's Highline Ballroom. Okayafrica contributor Rob Scher caught up with Egypt 80's afrobeat scion Seun Kuti ahead of the show to talk the new record, growing up with Fela, rallying around #stolendreams and so much more. Read on for the full Q&A.

Rob for Okayafrica: What’s its like playing in New York? Do you have a favourite city where you like to perform?

OKA: You were eight the first time you were put on stage and played with Fela’s Africa 70. Was that Fela’s doing?

SK: I remember my first performance. Although most people think Fela told me to do it, I was never put on stage. He never asked anyone to do anything; he was that kind of dad. He wouldn’t even tell me I needed to go to school. If I didn’t want to go, I’d just say to him: “I don’t feel like going to school this morning,” and he’d say: “That’s fine. Stay at home.” I think that’s what has made his kids so great on their own because he allowed us to make decisions so early on in life. He always wanted us to decide things for ourselves. So we became experienced in making decisions as we grew. He also wouldn’t protect us from the consequences of our decisions. He allowed us to make those decisions and live through whatever consequences came from them.

OKA: What inspired you to decide you wanted to play with the band?

SK: It was after coming off an American tour that I’d been on with them. I remember they’d just played the Apollo. Remember, being a naive little kid I would see my dad on stage all the time, performing and having fun. And then, there was the backstage. Fela used to only take cash. Bank transfers or cheques were bullshit to him. Cash. So backstage, there’d be piles of money on the table, women everywhere, and I thought: this is the life; this must be the easiest job ever. When we got on the bus I said, “Fela, this is what I want to do. I want to sing.” He replied, “You wanna sing. Can you sing?” I said yes, so he gave me an audition. Of course, it helps when your dad is the boss. I did the audition and he said ok, when we got back to Lagos I could start working with the band.

OKA: Do you remember your first gig?

SK: It was at the Shrine, I remember it well. I was so excited when I got on stage. I remember trying to sing the song and get it right which involved having to also watch the band and get the cues. During rehearsals I’d been watching the band while learning the songs. So, when it was show time, I just did what I’d done during rehearsals: I grabbed the mic and faced toward the band throughout, you know, the way I did in the rehearsals. After the show Fela comes to me in the dressing room and says “Yo. You have to face them man. Face the motherfuckers!” I faced the crowd after that.

OKA: In a previous Okayafrica interview you speak of representing the majority through your music. How has this continued on A Long Way to the Beginning and what for you is so important about afrobeat music relating to people back home?

SK: Primarily, I’m still talking about Africa, if I go into specifics sometimes, then Nigeria, because it’s the first thing that impacts me. Even before I’m an African, I’m a Nigerian. For me, it’s absolutely foul for an African band to sing about champagne and money and fast cars and things that maybe only 2% of our population can experience. Maybe another 3% can fake it. You know in Nigeria, they pop champagne at night and then drink garri (ground cassava beans) in the morning because they spent all their money to show off [laughs]. So, why would I want to relate to such a small percentage, even if they’re the ones controlling the media, the ones with the money who can put out whatever they want? MTV Base will come to Africa and prop up that kind of thing, support it and tell everyone: this is the most positive message out there. It’s difficult to bring a real message of positivity to the forefront because there’s so much money backing this—I have to call it—ignorance. There are a lot of afrobeat bands now, not Nigerian, that are speaking for the majority of people from where they’re from. Brazil, France, New York, UK – this is the global afrobeat family and represents the music in its purity. They are the real global voice of the people, representing what the real people are going through.

OKA: What was your involvement in the #bringbackourgirls campaign? What are your thoughts on how it spread?

SK: I started the movement from my twitter handle with the hashtag #stolendreams. We organized the rally on May 1st. They tried to teargas us but we stood our ground. I’m not happy with what has come out of all of it though.

SK: [Laughs] Yeah, exactly. Even if we do manage to rescue these 200 girls, what does this do for Nigeria? We need to get to the root of the problems, not merely the symptoms. We need to go deep.

OKA: This must be frustrating for your music. Trying to get your message across to the majority in Nigeria?

SK: It’s kind of sad in a way, but it’s also kind of inspiring. There’s a battle and I’m always inspired when there’s a battle. Maybe I wouldn’t be inspired if it was easy and I could just walk into the radio station and everyone’s happy to play my music all day in Nigeria. Then maybe I wouldn’t have to work so hard. The fact that we want to do it and we don’t care about the obstacles in our way, for me, that’s an inspiring thing. It’s difficult to reconcile the fact that even Fela’s music is never played on the radio in Nigeria. The African media is not for the African people. They only celebrate those people that are trying their best to be Western, to try as much as possible to be like Jay Z or Kanye West. These are the people that young black people all over the world are made to look up to. Take Pharrell Williams’ latest video with a black Marilyn Monroe. This is the mindset they want black people to have. Black Marilyn Monroe? What happened to Angela Davis? She’s already black – you don’t need to make a black version of her. Ella Fitzgerald? Nina Simone? Black Marilyn Monroe- what the fuck? Black people need to find a way to begin realizing their real heroes. Not the heroes the media is imposing on us. It’s difficult but I also see that there’s a big victory there. A victory we can say we achieved on our own, without mainstream media, without anything - just through people power.

OKA: How have you come to find yourself working with such incredible talents? Brian Eno on From Africa with Fury: Rise and now on A Long Way to the Beginning, Robert Glasper as your producer? What have you taken from these two great men?

SK: Well you know, because I have such a nice personality and warmth, it seems to attract greatness to me, oh, and of course teargas [laughs]. I met Brian when he invited me to an event he curated in Australia. He was such a big afrobeat fan and knowing who he was, I just latched on him and wouldn’t let it rest until he said ‘yes’ to working with me. He’s such a great guy and truly a god of sound. What Brian really understands is sound. But then there’s Robert, who is a musician and that was the bond we shared. So, to have someone like Robert in the studio was so great, and he could understand what I was trying to do. I could play off him and he could play off me. I write all my songs before going in to studio, so when I have a co-producer it makes it easier on them, because they can see the canvas and the painting and just add a little birdie here, or a little thing there. That’s how Robert and I worked and it was quiet easy being fellow musicians. Whereas, with Brian, it was an education - I was in the studio listening and saying “yes sir, yes sir” because Brian really schooled me. Working with him on my last album had a big influence on how I made my new album. I also realized from working with such great musicians, that the really great artists are humble and very accommodating and very open and willing to impart their wisdom.

OKA: What about the collaborations on your new album? How did you come to work with Blitz, M1 and Nneka?

SK: Well, do you want me to be really honest with you, the three of them are my friends and I knew they weren’t going to charge me any money. I knew from the start. “Call them up,” I said, “it’s going to be free.”

OKA: If you could have your choice of collaborating with anyone musically, who would it be?

SK: I don’t have anyone specifically. I would like to work with musicians with substance, anyone who’s going to add to the music, basically, any music that has positivity and a positive message to share with the world.