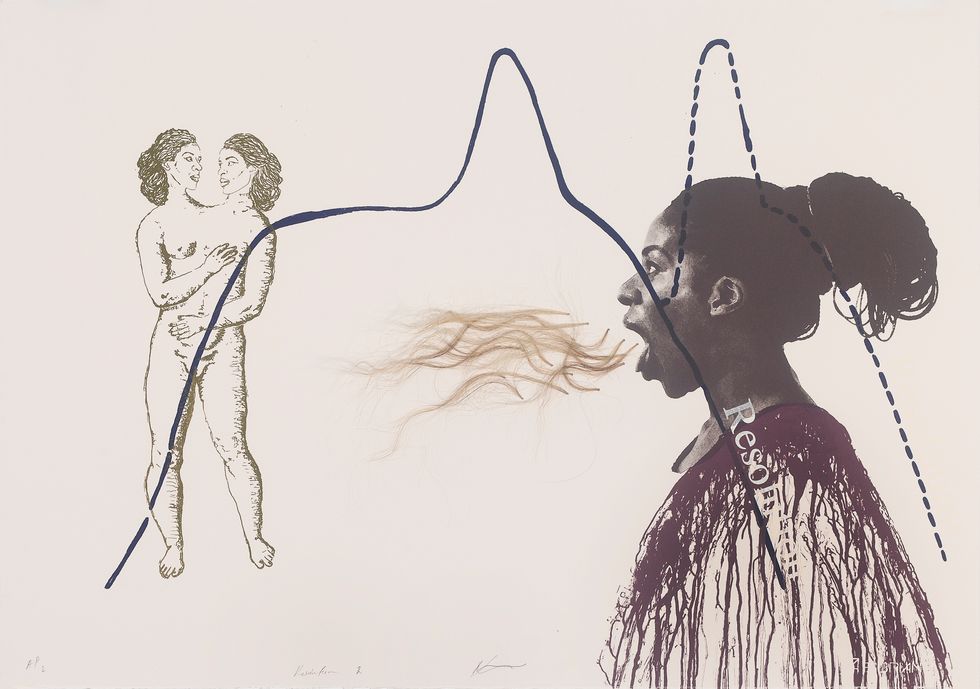 This young curator is sparking a Joburg sex revolution.

Lerato Bereng, currently walking about the second room with a visitor, is black girl magic personified. She went on a vertical leap and curated a show where Mapona's straight-to-DVD shenanigans can exist alongside Steven Cohen's titillating––albeit multiply-problematic––work around sex/nudity and Pamella Dlungwana's virtuous poetry-as-performative-turn-on; where you get drawn in while Lady Skollie's illustrious poussey drawings quietly read Lineo Segoete's Basotho Women Love Sex Too; where names like Simon gush over FAKA, and all that spank and spunk and sweat captured in Jalada's Sex Anthology assume a deviant literary format, contrasting with the names of murdered lesbian women written with a black marker on the white wall opposite the one where stories from the collection are pasted.

"It was important that sex really wasn't just the fun stuff. I wanted to include the dark sexual violence history that South Africa has," says Bereng, referring to the names and dates accessed from an up-to-date––as in April 2016!––hate crime timeline drawn up by Zanele Muholi, which stretches back to the late 2000s. We're currently upstairs. Bereng’s seated on one of the benches in the attaché she'd hoped would house the exhibition in its entirety, but which now serves as the second part of it, housing what she calls “less visual things.”

Lady Skollie “The Woman made me DO IT” A phallic ode to the Blame Game we were born into Contractually bound by Genesis 3: 12-14, if you are into the Bible and stuff. 2016

"For me what was interesting was researching sex. I was starting to understand sex in relation to the context that I'm in. In relation to Johannesburg and South Africa and politics," she points out. Bereng acknowledges 2010 as a year which stuck out during her research. "There was a debate around legalising prostitution for the World Cup," she says. She adds that the period she was interested in was the ten years between 2006 and 2016. Then, as a reminder: "In 2006, we had the [President Jacob] Zuma rape trial."

In hindsight, the trial marked a pivotal moment in how South Africa engages with sex; how patriarchy and all its internalised forms operates; how power relations work to influence favourable outcomes and how, if we let feelings and emotions cloud our judgment, we could miss out on taking giant steps in how we address not only sex, but everything else surrounding sex (including sex work, sex-positivity, shaming, and more). For reference, look at how the ANC Women's League moved swiftly to silence the violated––an AIDS activist and daughter of Zuma's friend––as opposed to the perpetrator of the violence (Zuma himself). The silencing continues in multiple formats. Rap groups and rappers who've sexually violated women are still allowed to walk streets, book shows, post up on Insta, and generally go about life unperturbed. Unbothered.

The initial spark for the project, one of many, came during her encounter with Deep Throat at the Museum of Sex in New York. "It was just this amazing thing that I'd never seen before," she says. Bereng then learned a host of things about sex she was "completely oblivious to."

"Everybody that I told I was doing a sex show had a sex anecdote for me. There are all these spaces throughout the history of Johannesburg, and [of] South Africa, that exist but are not Google-able. I found out about swinger's clubs that got started, I found out about a sex stokvel in Pretoria, Hammanskraal, that happens every Monday." Through the show, Bereng says, one will find out "exactly what is happening here." The 'here' being her point of reference, South Africa (and Jozi in particular).

So there they were, the FAKA collective, queening atop makeshift bed structures, naked and ripped and muscular, sweating while they performed the act of sex––not on each other, though that would've been so ill!

Another snapshot: the comments; the shocked looks on people's faces.

It was at that point that I realised maybe we, the visitors, are the performers. Our outlook on sex is performance art of the highest order. We disguise our true feelings––the ones we let rip in bedrooms, over Whatsapp conversations while trying to get laid with multiple partners, in Hammanskraal where blessers go to find blessees every Monday (there's a TV special).

"This is the beginning of a conversation. I see it as not a final stand-point or presentation of sex," concludes Bereng. "This is a collection of interpretations on sex."

SEX is on view at Stevenson Gallery in Johannesburg through 2 June.