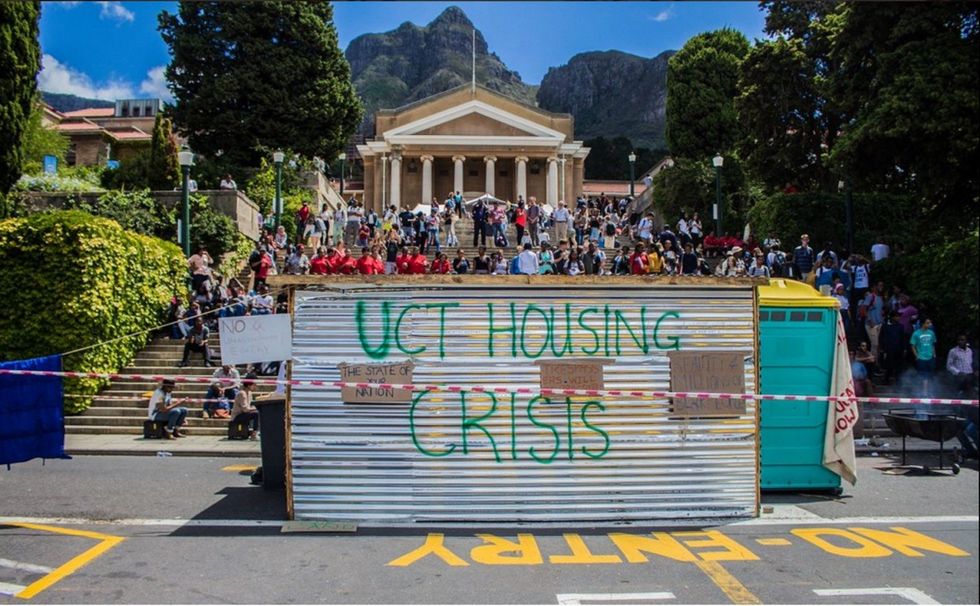 Students at the University of Cape Town erected a shack Monday to bring awareness to the institution’s student housing shortage.

Students at the University of Cape Town, led by Rhodes Must Fall (RMF), erected a shack Monday to bring awareness to the institution’s student housing shortage.

They placed it at the feet of the UCT Jammie steps that lead to where the Cecil Rhodes statue once stood, although police and private security eventually dismantled the shack Tuesday evening.

In a statement from RMF, the Shackville Occupation was a response to the university’s “continued exclusion of Black students:” “At residences throughout UCT, the privilege of white students, who are not subject to the large-scale eviction or space shortages which Black students face on a systematic basis, is further entrenched. This despite them being generally better equipped to find and afford accommodation outside of the residence system. Shackville is a representation of Black dispossession, of those who have been removed from land and dignity by settler colonialism, forced to live in squalor.”

[WATCH] #Shackville is meant to highlight the current accommodation crisis at UCT https://t.co/GOn45426YNpic.twitter.com/1FZXHBdOD3

The university denied RMF’s claim, but admitted the issue as 700 beds that are usually free by January were not made available due to deferred exams, the Cape Argus reports. University spokesperson Elijah Moholola informed the Argus of outstanding financial aid decisions and an increase in the number of students in need of accommodation. “The university has only 6,680 beds for a total of 27,000 students,” Moholola said. “Therefore, some 75 percent of students live outside of the residence system.” Lelethu Dantyi told LIVE Magazine SA that the university put him on the housing waiting list three years in a row. “Since I got here, I never got residence. But as a black person, I’m used to surviving. But that doesn’t mean someone else is able to survive just like me,” he said. “What we are saying here is we are refusing the university to exclude black students. So this shack is symbolism.”

Paintings and a wooden plaque dedicated to General Jan Smuts were set on fire during the demonstration as a decolonization project, according to RMF.

Jammie is no longer on fire but this is what it looked like at the time. (Audio had to be edited) #shackville#uctpic.twitter.com/oiA55Ha2a1

Tensions continue to rise at the lower campus where students were hit by rubber bullets.

This is a developing story. We will update the post as more information becomes available.